Sabi Rongish didn’t experience complete culture shock when she moved to the United States from her native South Korea a little more than two years ago.

Rongish spoke some English, and her husband is from Kansas, so they had visited his family and vacationed here several times. Rongish wasn’t overwhelmed, but she still had a lot of adjusting to do. She wanted to learn better English and know more about the American way of life.

For Rongish and other immigrants in the Lawrence area, Plymouth Congregational Church, at 925 Vermont St., is providing help. The church hosts free twice-weekly English classes for non-English speakers, as well as low-cost Spanish classes for people who want to add to their language skills. It’s part of the church’s efforts to offer hospitality and become more culturally diverse. 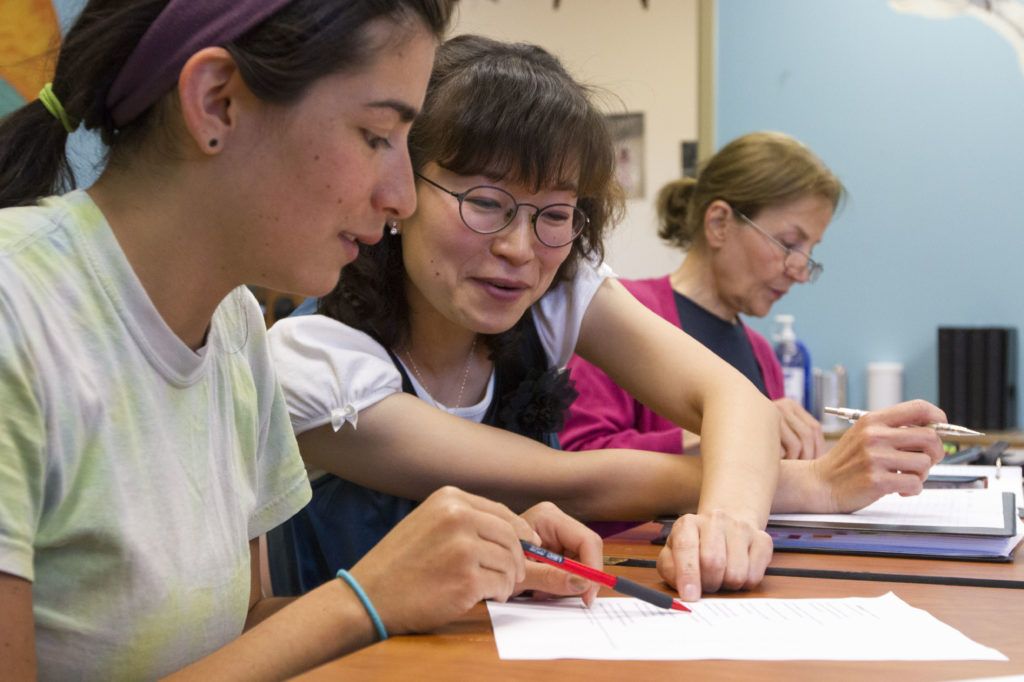 Sabi Rongish, center, and Grace Scrivo, both of Lawrence, work on reading a poem during an English language class Thursday evening at Plymouth Congregational Church, 925 Vermont St. For a donation of 0-0, participates can partake in 18 sessions of either elementary or intermediate English or Spanish classes. 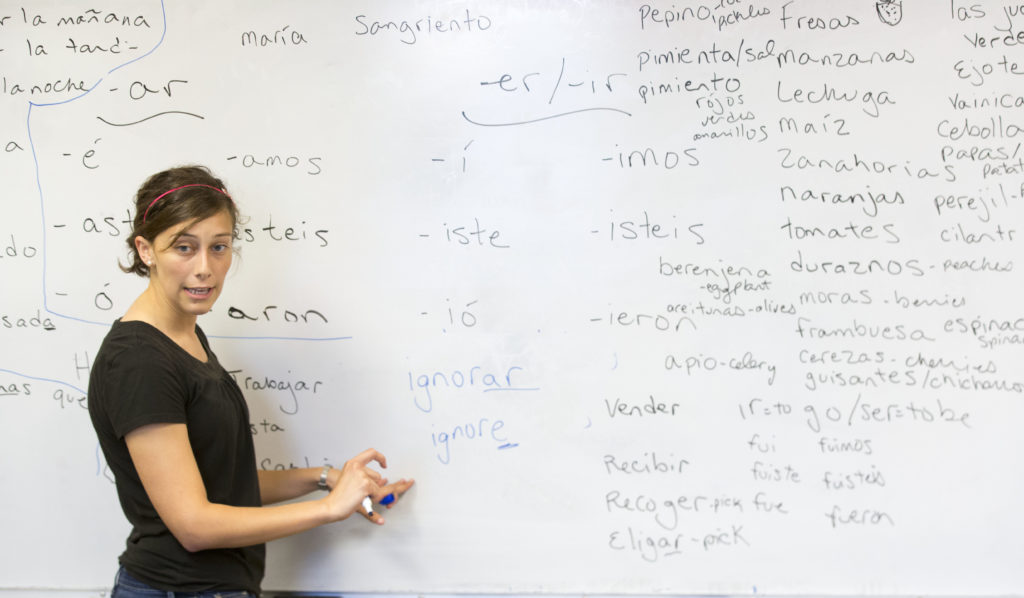 Gabrielle Reimer, of Lawrence, instructs her intermediate Spanish class Thursday evening at Plymouth Congregational Church, at 925 Vermont St. The classes are taught by a mix of volunteers, which include junior high and high school teachers and members of KU’s Spanish and Portuguese department.

“Part of the idea is we’re not only teaching English, but we’re also reaching out and building bridges in the community,” said Joshua Spain, Plymouth’s language program coordinator.

The English program at Plymouth was started five years ago by Shannon Gorres, a Kansas University graduate student who had a passion for reaching out and wanted to provide hospitality to people from other nations. (Gorres has since moved away from Lawrence.)

The program began with only a few students in a single classroom. As word spread about the free English classes, so did the number of students showing up each week. Three years ago, the church decided to also host Spanish classes. For this year’s summer session, more than 80 English and Spanish students are registered.

“Some students are young people who don’t want to pay. For the most part it’s middle-aged or old-aged people who want to learn something new or are traveling,” Spain said. “It really runs the gamut.”

The classes are taught by volunteers, but just because they aren’t paid doesn’t mean they aren’t knowledgeable. The volunteers include a mix of junior and high school teachers and members of the Spanish and Portuguese department at KU, as well as instructors certified in teaching English as a second language.

Spanish student Debby Hadel has been taking the classes for more than two years and said part of the program’s appeal is that it isn’t a university atmosphere.

“It’s more conversation,” she said. “You learn the idioms, the slang, and sometimes they bring in people from different cultures.”

For Rongish, what was most helpful was being able to meet people from the community, as well as the way the teachers cater to the students. For instance, she had a difficult time learning about driving laws in the U.S., and the teachers helped her by providing resources and answering questions.

“I really appreciate what they’ve been doing for students and people,” Rongish said.

In addition to the English classes, the congregation has been using the Spanish courses as part of Plymouth’s Hispanic Ministry — one of many services the church offers to the local immigrant population.

“A lot of places will just focus on religion or just focus on education, but here we are here for all of those issues and we even have professional counselors,” said the Rev. Peter Luckey, senior pastor at Plymouth.

Because of its efforts to expand its diversity, Plymouth received a $20,000 grant from the United Church of Christ to help pay for a part-time pastor of Hispanic ministries.

“They believe the worship and language all make for the strong possibility of a vibrant ministry focus and see it as an opportunity for Plymouth Church to be a multicultural congregation,” Luckey said.

Community members interested in taking the classes can register and begin attending at any time. Classes are at 7 p.m. Tuesdays and Thursdays at Plymouth Congregational Church. The suggested donation for 13 weeks of Spanish classes is $40. English classes are free.