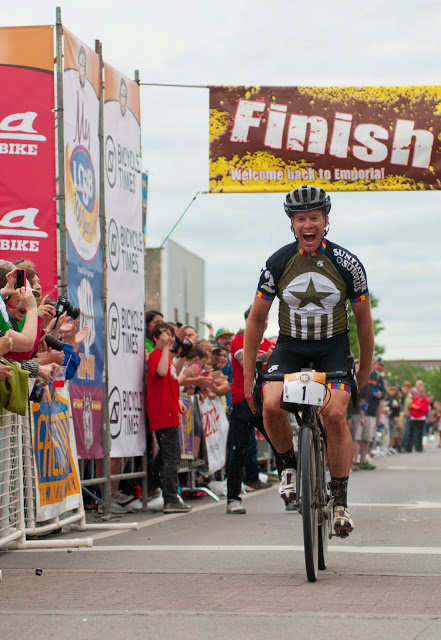 No one could tell there was a hot spot on his left foot. Or that both his legs were irritated because of 200-miles-worth of contact with his bike.

When Lawrence’s Dan Hughes crossed the finish line Saturday to win the Dirty Kanza 200 race in downtown Emporia, he broke out in a huge smile after winning the event for the fourth time in seven tries.

“Any time I can finish the Kanza and not embarrass myself is pretty good,” Hughes said. “Every time that I win, I think it’s another opportunity for me to think all those other wins weren’t a fluke.”

It certainly isn’t by now.

The 44-year-old Hughes coasted to his third consecutive championship in the event. His time of 12:03.39 was more than 18 minutes better than the next competitor.

In the six times he has finished the Dirty Kanza — he had to quit once because of a wreck — he has taken either first or second each time.

“They’ve created such a special event down there in Emporia, and the town has really gotten behind it,” Hughes said. “It’s tough to not want to go back.”

The Dirty Kanza officially is 202.2 miles long, taking place primarily on gravel roads in the Flint Hills of east-central Kansas.

The conditions present many challenges. For one, some of the rocks are big and sharp, which can lead to flat tires if equipment doesn’t hold up.

The wind also played a factor Saturday, as a 30 mph gust out of the west meant racers faced a strong headwind for 50 straight miles from Madison to Cassoday.

Midway through the race, Hughes was in the lead pack with two other racers before both of them went down with flat tires.

That put Hughes by himself for the final 75 miles, and he fought the mental game of trying to push himself on a lonely road while still keeping enough energy for a burst at the end if he needed it.

“At mile 150 when it’s not really very much fun any more, you just have to remind yourself, ‘Hey, you signed up for this,'” Hughes said. “‘This is what you wanted to do.'”

It turned out Hughes wouldn’t be challenged late. His time was just 7 minutes, 39 seconds off the race record he set in 2012.

To prepare for the event, Hughes — owner of Sunflower Outdoor & Bike in Lawrence — spent about 20 hours a week riding. He didn’t exceed 150 miles on any single trip, but on good weeks he was still able to churn out between 250 and 300 miles.

Training is only part of the reason for his success, though. Nutrition also plays a factor, as Hughes has seen many strong riders quit the Kanza race because their stomachs lock up and refuse to accept food or water.

Hughes also said — for him — it was important to have a strong support crew that helped push him through the late stages.

Though the grueling race resulted in some minor back and neck pain, Hughes vows that he’ll return to the Dirty Kanza next year in some capacity, whether it’s going for a fourth straight win or trying to finish the race on a tandem bike.

Part of the draw is the race itself. Hughes’ friend Rebecca Rusch, who won the women’s race with a 12:51.04, flies all over the world to compete in similar events.

In 2012, Hughes finally convinced her to give the Dirty Kanza a try, and she did so after competing in Morocco the previous week.

Afterward, she told Hughes it was one of the best racing experiences she’d had all year.

“And, ultimately, it’s more rewarding than you thought it was going to be.”