A police helicopter spotlight shone down on FBI agent Jack Davis as he surveyed the scene of a Kansas City, Kan., gang massacre, with other officers swirling around the scene. 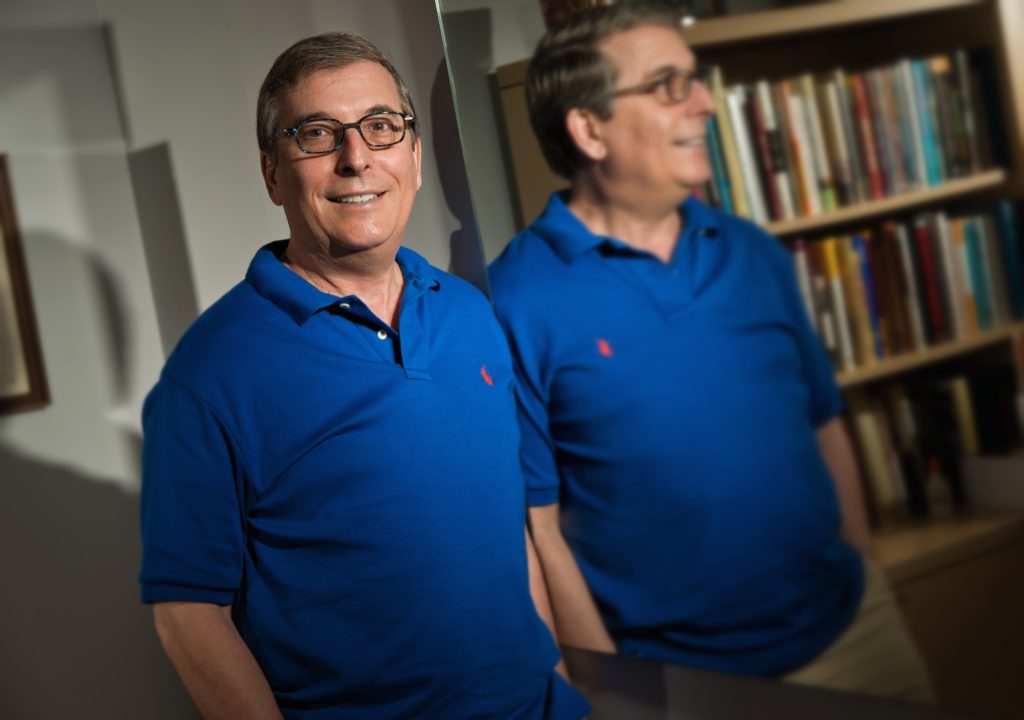 Joel Goldman has a bachelor's degree and a law degree from Kansas University. He left his career as an attorney in Kansas City to become a full-time crime novelist.

That’s the moment when Davis’ body was struck by uncontrollable spasms, leaving him doubled over on the ground.

“It’s pretty hard to hide that sort of thing,” says Joel Goldman, the author who wrote that fictional scene in his 2008 book “Shake Down.”

Goldman speaks from experience. Before 2006, Goldman was a successful Kansas City trial lawyer, reveling in his courtroom performances and showing off the skills he’d learned as a star of the Kansas University debate and moot court teams in the 1970s.

When he developed a movement disorder that caused him to experience involuntary shakes and spasms several times a day, he wasn’t literally under a spotlight. It only felt that way.

But unlike his character Jack Davis, who stubbornly continues fighting crime against his doctor’s recommendations, Goldman turned away from the only career he’d ever imagined.

Instead, he became a bestselling crime author.

“As crazy as it may sound, I look at this disorder as something that has opened new doors for me,” said Goldman, 60.

Goldman, who earned a KU bachelor’s degree in 1974 and a KU law degree in 1977, has released nine novels and one novella since 2002, all set in the Kansas City area, where he grew up. He’s juggled three different crime thriller series: one focused on a male trial lawyer, another on a female public defender and a third about FBI agent Davis, who inherited the disorder that changed Goldman’s life.

As of this past weekend, Goldman ranked as Amazon.com’s 53rd most popular mystery author, one spot ahead of Mary Higgins Clark.

Though people who knew Goldman at KU say they’re amazed by how well he’s handled his unexpected career switch, they’re not surprised he’s been successful.

“He’s got a good sense of suspense,” said Donn Parson, Goldman’s old KU debate coach, who has read all of his books. “He writes well, just like he talked well.”

Parson coached the KU debate squad, one of the most successful programs in the country, from 1964 to 1988. He said Goldman was one of the 10 best debaters he ever coached, earning a national No. 2 ranking in 1974 along with his partner, Bill Webster.

The story was much the same when Goldman moved on to the KU moot court team as a law student, KU law professor Bill Westerbeke says. Of all the students on the team during Westerbeke’s 12 years of coaching, Goldman was the second best, he said. (The only one better: former Governor Mark Parkinson.)

For years, Goldman served as a persuasive pitchman for the KU debate program, asking alumni to give money and help it compete with deep-pocketed Ivy League squads.

“He was good at it,” said Robert Rowland, a KU communication studies professor and former debate teammate of Goldman’s. “And he wasn’t afraid to do it.”

As a trial lawyer, Goldman was “spectacular,” Westerbeke said, whether on the side of the plaintiff or the defendant.

Goldman worked civil trials all over the country for 28 years, working first for a small firm in Kansas City, Kan., then for the larger Husch and Eppenberger in Kansas City, Mo.

“I loved it,” Goldman said. “I loved the camaraderie. I loved the combat of the courtroom.”

In 1992, one of Goldman’s partners was talking his ear off about how a different partner at the firm was driving him crazy. Goldman suggested they write a murder-mystery in which a fictional version of the offending partner is killed in the first chapter.

And Goldman did that, finally publishing the book in 2002: “Motion to Kill,” his first book featuring trial lawyer Lou Mason.

He wrote four more Mason books while still working as a lawyer.

In 2006, when he could no longer hide his periodic shakes at work and his doctors said he could no longer handle the long hours and constant travel of his job, he was determined not to feel sorry about leaving behind the law. Instead, he decided to focus full time on his now quite-successful writing career.

“People ask me now if I miss it,” Goldman said of his law career. “And I tell them that I miss it in the way that you miss your first girlfriend.”

All of his characters grapple with questions of conscience, ethics and following — or not following — the rules, Goldman said.

“Heroes are flawed, and even villains might have redeeming features,” he said.

Though he loves KU and Lawrence, his disorder makes it tough for him to make it to Lawrence from his home in Leawood, where he lives with his wife. But he’s determined to return this fall for a KU debate reunion to celebrate Parson’s retirement after 48 years on the communication studies faculty.

His books have won or been nominated for awards from the Mystery Writers of America and the Kansas City, Mo., branch of the American Association of University Women. When NPR came to Kansas City for its “Crime in the City” series about detective novels this summer, it chose to focus on Goldman. He expects to publish his next book, in his new series on public defender Alex Stone, in November.

Seven years after leaving the law profession, Joel Goldman finds himself in the spotlight again. But this time, he has nothing to hide.