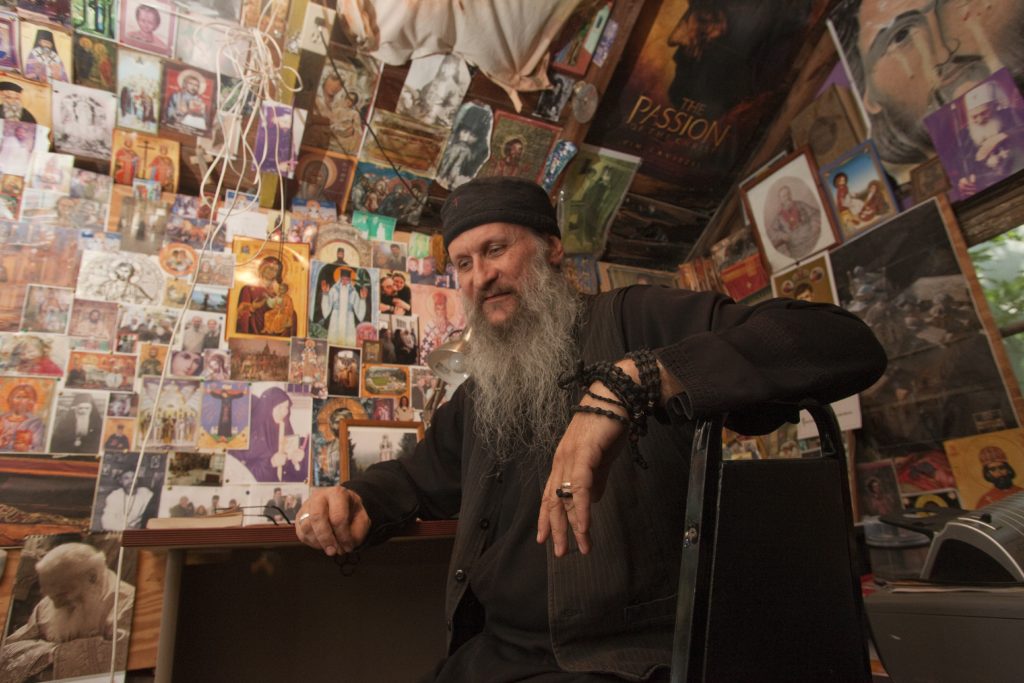 Michael Wilson sits in his cell at his rural Lawrence home on a recent day. Wilson spends time in the reconfigured shed, studying and contemplating his faith. The 55-year-old Lawrence man has transformed in recent years from a Rastafarian to a Serbian Orthodox deacon. 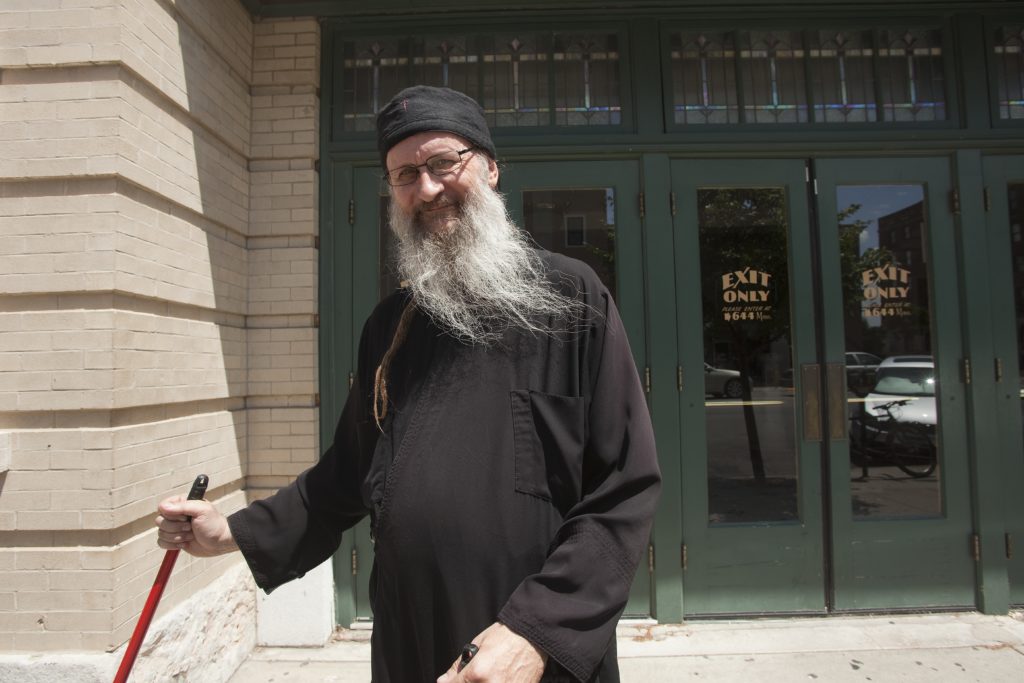 Lawrence resident Michael Wilson 55, has been the janitor at Liberty Hall for more than two decades but has a second job, as the deacon for a Serbian Orthodox church in Kansas City, Mo.

He’s been called Muslim, Jewish, a Zen master, even Osama bin Laden. Oftentimes people are just puzzled: What is that guy?

Michael Wilson, who has worked at Lawrence’s Liberty Hall for more than two decades, has a long beard that grays the further it grows away from his face and dusted dreadlocks left over from his days as a Rastafarian. Now he keeps the hair and beard to present himself in the image of Jesus Christ. He dons a black cassock and skull cap, an outfit that signifies his ordination as a Serbian Orthodox deacon.

When he tells people this, they often ask him, why Orthodoxy? Wouldn’t it just be easier to go to the Lutheran church down the street?

“Christ calls people in different ways,” said the 55-year-old janitor. “Each one of us has his path. Your path is the only path to Christ.”

The leap from Rastafari to Christian Orthodoxy is not as far as one might think. Much of the Rastafarian community is itself deeply spiritual. Its figurehead, former Ethiopian emperor Haile Selassie, is believed by followers to be a descendent of King Solomon. Even when he was known as “Ras Mike,” Wilson espoused a message of love, of oneness, of God.

“There are only two things that Mike dropped: the herb and the beliefs about his majesty (Selassie). Everything else is the same Mike,” said Lynne Anderson, a Kansas City, Mo., holistic practitioner who has known Wilson for nearly three decades. “If he came and told me he was leaving his spiritual journey, that would be the only thing that would surprise me.”

Wilson has a tendency to dive deep into whatever he’s passionate about. He went all the way as a Rastafarian as well, attending Rasta-revival festivals, hosting a reggae radio show in Kansas City and traveling to Jamaica on several occasions.

He actually met the man who brought him into the Serbian Orthodox faith, the Rev. David Altschul, at a reggae festival in Kansas City, Mo., more than 10 years ago.

“There were many similarities between Rasta tradition and Orthodox tradition,” said Altschul, who is known to his followers as Father Paisus. “Respecting the Earth, treating each other with dignity and love, seeing all of us as in the world together, overcoming racial injustice, the idea of us being one humanity.”

The two soon discovered they had a shared interest in Ethiopia: Each owned the same four-volume book on Ethiopian saints. Altschul invited Wilson to his parish, St. Mary of Egypt Orthodox Church in Kansas City, Mo. Wilson started attending and eventually came to see the falseness of the culture he had dedicated more than a decade of his life to, coming to believe that Jesus Christ, not Selassie, was God incarnate.

Peaceful from the beginning

Reared in Manhattan, Kan., Wilson was a quiet baby who never fought with other kids or argued over toys, his mom told him later.

“She thought that I was always close to God,” he said. “Some say I was maybe entertained by angels.”

You can see what they meant. Wilson is a gentle man whose appearance is alarming but whose personality puts you at ease. He says he can’t really remember ever being angry.

As a teenager, he went through his “normal rebellious” phase, he says. That’s around the time he met his wife, who has been his “rock” ever since.

Teresa Wilson — Orthodox name, Josefina — has participated in her husband’s passions fully. If she was at first reluctant, it didn’t show with time, as she eventually followed her husband head first off each diving board. “I always thought, ‘I really love him, so let’s do this for him,'” remarked Teresa, a cook in a senior living facility.

The two live a simple existence in a small, rural Lawrence farmhouse. Teresa grows a lot of their food in her meticulously kept garden. Their property, which is engulfed in vegetation, is strikingly calm, the sounds of nature the only interruption.

“I am drawn to the stillness of the world,” Michael said. “We say the future language is stillness. The more we can be quiet, the more we can hear God.”

Wilson contemplates rather than watching TV or poking at a smartphone, gripping a rosary and staring out his picture window. He has a chapel in his house where and he his wife hold services when they can’t afford the gas to drive to Kansas City. He also spends a lot of time studying and praying in his “cell,” a reconfigured shed filled with books, candles and pictures of Christian saints.

Always in his heart 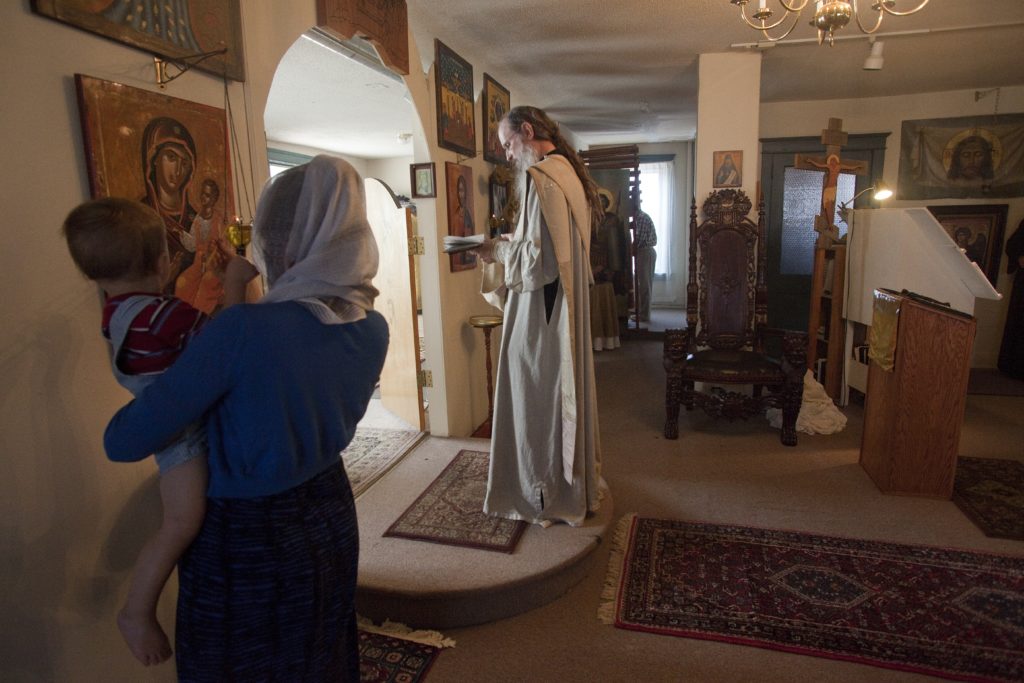 Michael Wilson helps lead liturgy at St. Mary of Egypt Orthodox Church in Kansas City, Mo., on a recent Sunday. The 55-year-old Lawrence man has transformed in recent years from a Rastafarian to a Serbian Orthodox deacon.

St. Mary of Egypt Orthodox Church is located on the third floor of a nondescript brick building in inner-city Kansas City. Services are held in a modest room that smells like a used bookstore. Parishioners take off their shoes upon entering; some kiss the floor.

During liturgy on a recent Sunday morning, women in drab-colored head scarves and breezy dresses bowed in prayer and sang in harmony. Congregants sauntered by a large tub in the middle of the floor, dabbing their hands in holy water. Burning candles gave the room a mystical aura, making one question whether it was smoke or something less easily explained.

Wilson, in a flowing, tan robe, read scripture in front of the youthful, multiracial congregation. A woman held a decorative umbrella the colors of Christmas over him, a tradition borrowed from the Ethiopian Orthodoxy, while altar boys in orange and gold robes gripped candles close to their chests. Wilson’s soft, singsongy speech was drowned out by fans blowing stale air at the floral-patterned drapes.

The deacon shook a censer, walking through its smoke, its bells jingling. He looked to be bobbing to the beat, like he was back in the reggae hall. He turned his back to the congregants, his dreadlocks facing them, them answering his calls.

When it was time for Altschul’s sermon, the kids gathered on the carpet like obedient kindergartners at story time.

“The path to the kingdom of God runs through the heart,” the priest said.

While Altschul’s message was meant to be universal, he could just have easily have been referring to his disciple.

To contact Michael Wilson, email him or drop by his house at 837 E. 800 Road in Lawrence.

“We all have our paths,” Wilson explained on a recent day at his Lawrence home. “Even in my rebellious days, as a teenager, I was really seeking God. I was seeking a life of prayer and a life of simple living and quietness and peace. Inner peace is the goal, and that’s what Christ gives you.”

Has he discovered inner peace yet?