For those who don’t fully appreciate the history, the idea of moving a pro-slavery official’s tombstone halfway across the country to Lecompton might raise some eyebrows. 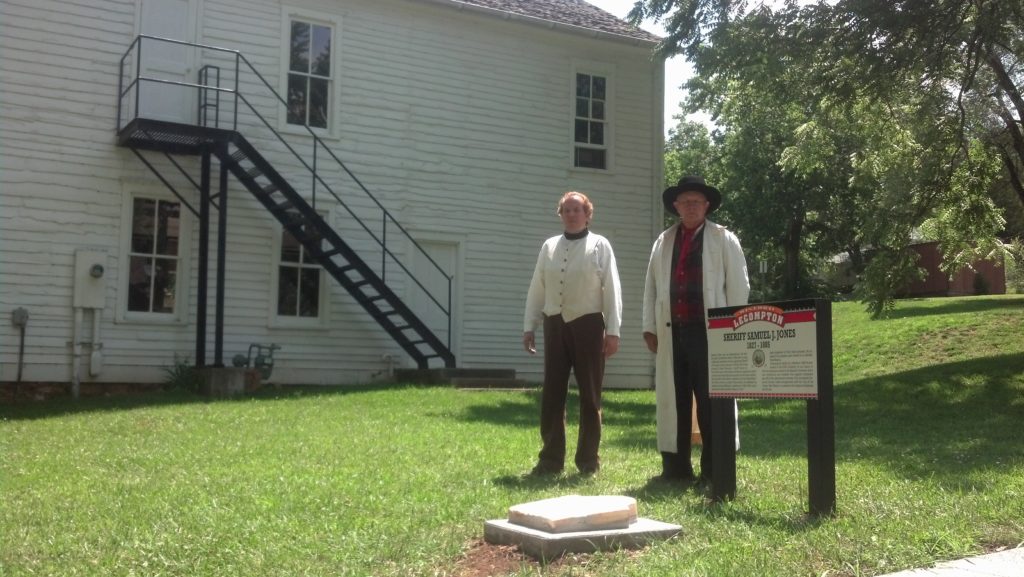 Tim Rues and Paul Bahnmeier dress in pioneer costume by the tombstone of Douglas County Sheriff Samuel Jones beside Constitution Hall in Lecompton.

Jones, the first sheriff of Douglas County, was a Southerner by birth and brought his pro-slavery ideals to Kansas when the territory was opened for settlement in 1854. Tim Rues, site administrator of the state’s Constitution Hall historic site for the Kansas Historical Society, said that although Jones is known for his opinions on slavery in the early days of Kansas, he did a lot to develop the state.

“He was involved in a little bit of everything,” Rues said. “He put all his money into this town with the assumption it would be the capital of Kansas.”

Jones, an original founder of Lecompton, built Constitution Hall in 1856, which now stands as the oldest wood-frame building in Kansas in its original location.

In the early Kansas territorial days, the Kansas Legislature rented the second floor of Jones’ building to use as its headquarters. The original constitution of Kansas, drafted in favor of slavery, was written within the building’s hand-made white walls.

Lecompton Historical Society volunteer Paul Bahnmaier said that when Jones was elected sheriff, he was dedicated to his job.

“He enforced the laws of Kansas, which were then pro-slavery,” Bahnmaier said. “But when he went into Lawrence once, he was shot. He came back to get a court order for warrants for those who attacked him, but he did go back with some men and burned the Eldridge Hotel and other buildings, but no one died.”

After the Kansas Legislature split over the issue of slavery and free state leaders moved their capital to Topeka, Jones’ efforts bottomed out.

“Lecompton went from boom to bust,” Rues said. “Jones’ investments lost value and he left for New Mexico. Now this is the only thing left of Samuel Jones.” 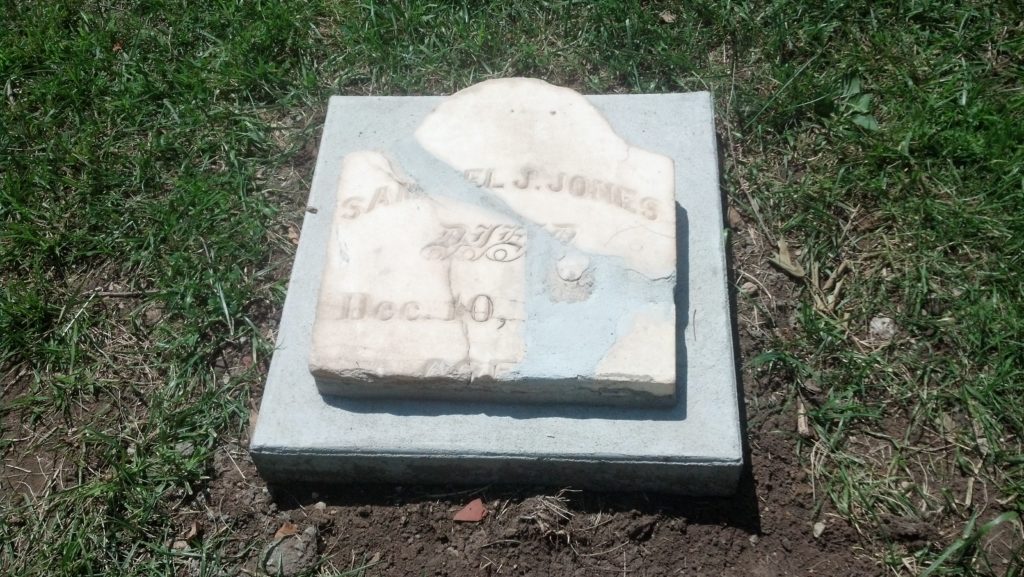 Jones lived out the rest of his life in La Mesilla, N.M., where his tombstone has been since his death. In 1930, the cemetery where he was buried closed and Jones’ body was moved to a new location, but the original tombstone was left behind.

More than eight decades later, genealogist Shirley Funk was researching the Jones family when she discovered that the stone had been abandoned. Knowing Jones’ historical significance, Funk coordinated with the Lecompton Historical Society, La Mesilla authorities and volunteers to move the remnants of Jones’ headstone to Kansas.

Broken into four parts after its more than eight decades of disregard, the grave marker now lies pieced together like a historic jigsaw puzzle in Lecompton.

Rues says the new addition to the museum will be an extra treat for seventh and eighth graders who visit on field trips throughout the school year. As part of the state curriculum guidelines, Kansas middle school students learn about six important territorial figures, Jones being one of them.

“When we get the middle schoolers, they can say, ‘man, there is this building I have been learning about and there is Jones’ tombstone,'” Rues said.

Though Jones was a pro-slavery figure, Bahnmaier, who portrays the sheriff in performances with The Lecompton Players, says Jones’ efforts in settling Kansas should not be forgotten.

“He was not exactly a saint, but he was not a devil, either,” Bahnmaier said. “He did not own a slave and he did not kill anyone — some of the free state settlers did kill someone.”