Upcycled wares on the up and up in Lawrence 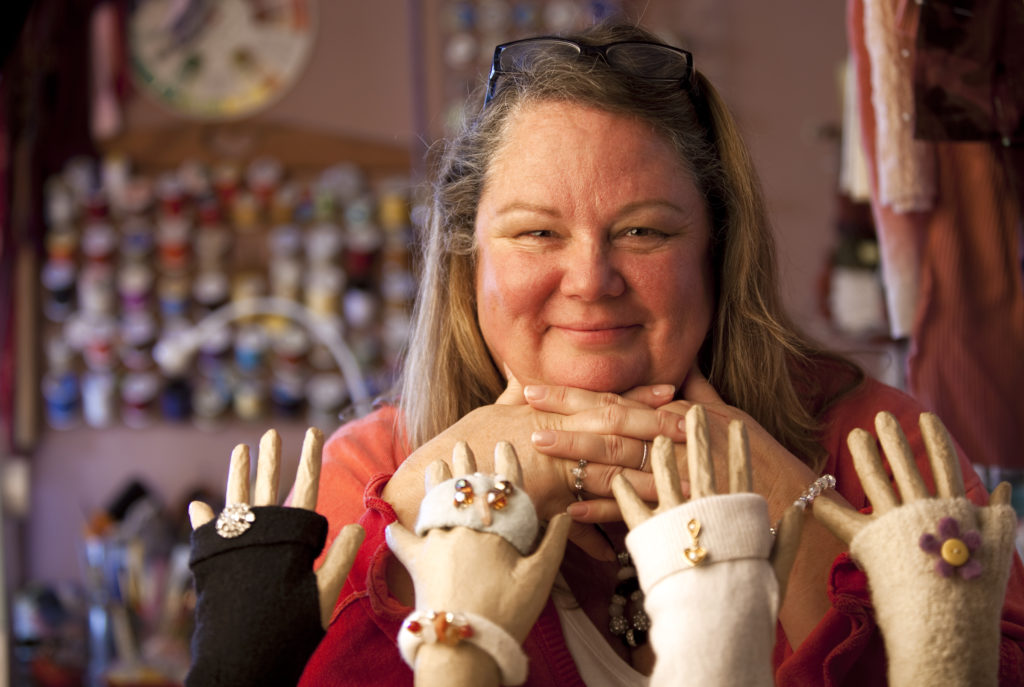 Jerry Dowdle of Lawrence is pictured with fingerless gloves and accessories she has upcycled from used or damaged sweaters. Dowdle calls her business TerranJerran: Taming the Tattered and sells on Etsy and at arts and crafts fairs. 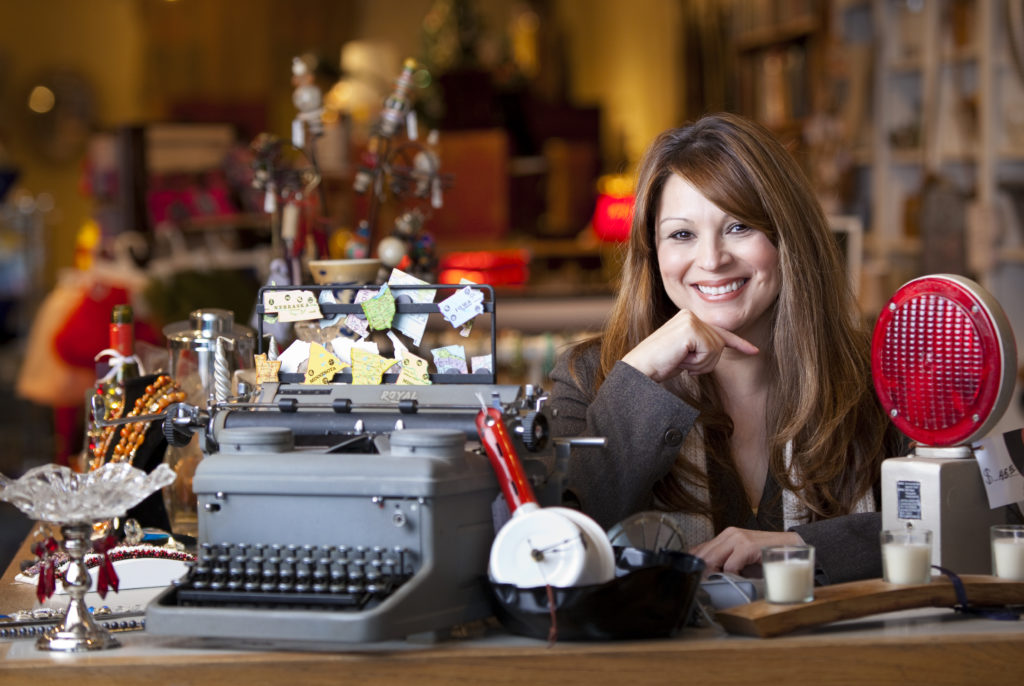 Sharmaine Saldana, owner of U.R.U Decor, 1113 Massachusetts St., is pictured in her store, which specializes in upcycled, 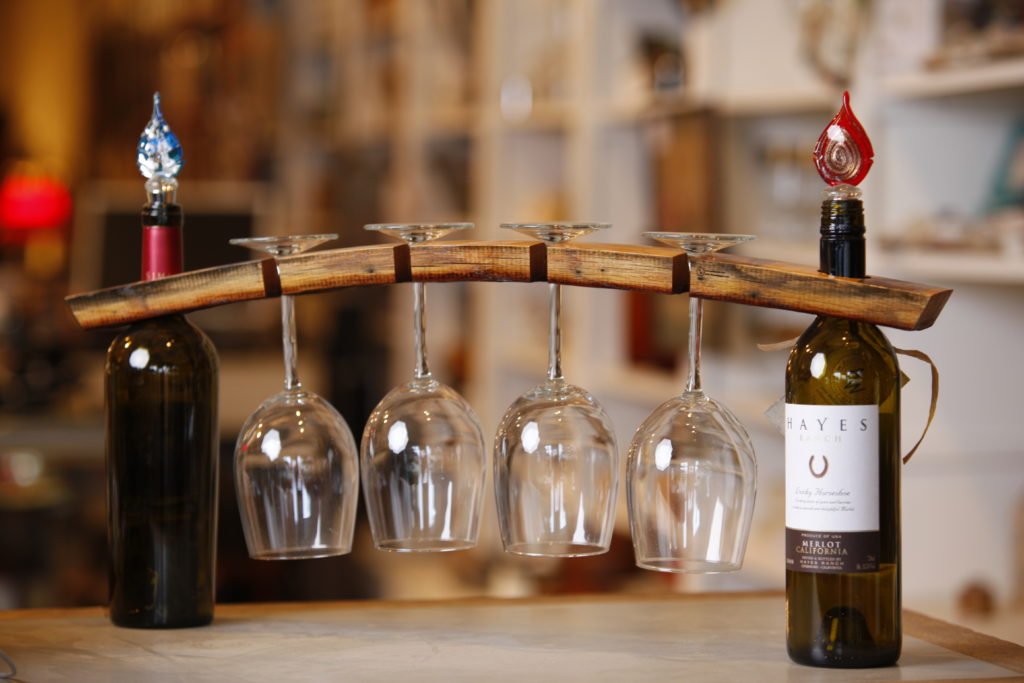 A wine glass holder created from a piece of wood from a wine barrel is among upcycled items for sale at U.R.U Decor, 1113 Massachusetts St. 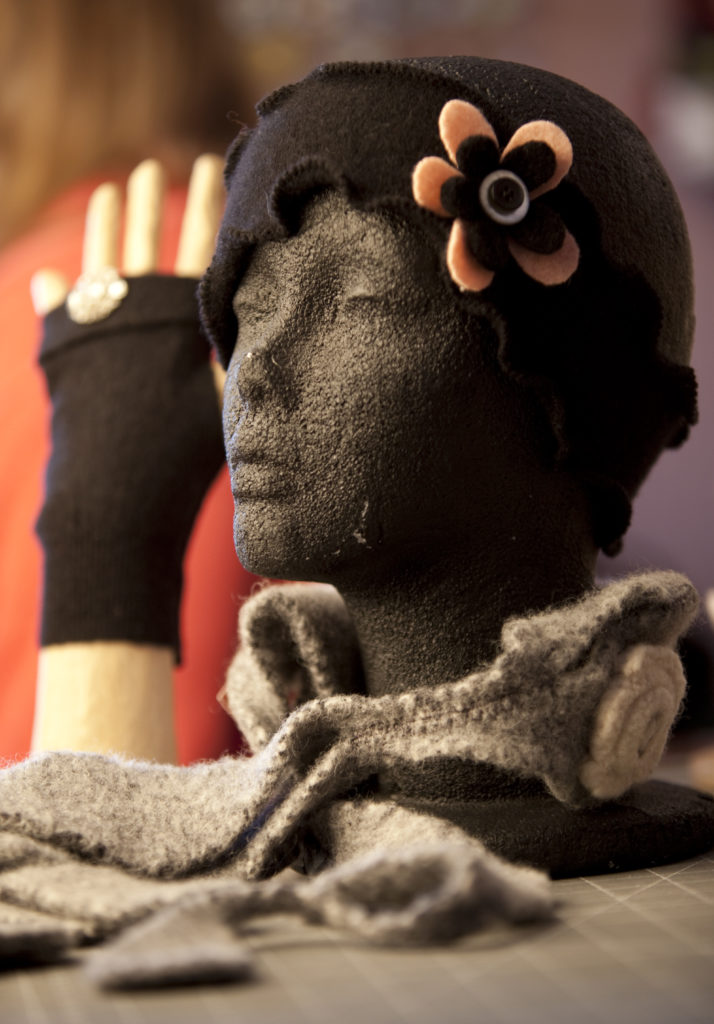 A head warmer, fingerless glove and scarf by Jerry Dowdle of Lawrence. Dowdle upcycles sweaters and other clothing items by deconstructing them and creating new clothes and accessories.

With a gaping hole, a fancy cashmere sweater becomes considerably less, well, fancy. But that’s only if your imagination is limited to thinking of it as the article of clothing it was originally designed to be.

Put the same castoff sweater through Jerry Dowdle’s sewing machine, and someone can soon be enjoying its whisper-soft luxurious wool in a new wrap, an embellished head-warmer or maybe even a pair of fingerless gloves.

It’s called upcycling, and not only is it all over websites such as Etsy and Pinterest, it’s an increasingly popular trend in Lawrence. Between downtown shops and individual artisans, creative types are breathing new life into old objects and finding success selling them online and in stores.

“At the most basic level, it’s taking something that’s not being used and that no one wants, and turning it into something useful and desirable,” said Dowdle, who calls her business TerranJerran: Taming the Tattered. “I like to add beauty to it — I like to think that’s what I do.”

Dowdle sells her items in-person at arts and crafts fairs and online through her Etsy shop, terranjerran.etsy.com.

One Lawrence retail store that specializes in upcycled items is U.R.U. Decor, which opened this summer at 1113 Massachusetts St.

Owner Sharmain Saldana sees upcycling as not just a trend but a mindset that can help combat the “throw-away way of life.” It embraces the quality and beauty of items that may no longer be fit for their original use but still have value as something new.

“We definitely, definitely believe in preserving as much as we can,” she said.

Saldana’s sidewalk sandwich board was made from the decorative part of an old wooden baby crib, and she used wire springs from the same crib to create a lightweight pot-rack style hanging shelf. Among items she sold recently was an antique steamer trunk she made into a coffee table by adding legs.

U.R.U. Decor also sells upcycled items created by other area residents. Wine-barrel slats turned into candle holders, dazzling pieces of costume jewelry turned into refrigerator magnets and a small antique pan turned into a clock are only a few. One of Saldana’s sons makes lightweight bowls out of vinyl records, which are also for sale at the shop.

U.R.U. Decor also stocks items other upcyclers might be in the market for, such as vintage suitcases — which Saldana has seen transformed into shelves or small dog beds — and lots of old books, which make whimsical purses or treasure boxes.

“It’s really just what they feel led to do or create with it, instead of just sending it to the landfill,” she said.

They’re novelties, owner Matthew Richards said. People seem to be drawn to the “clever” idea of using something for a purpose it wasn’t originally intended for.

Upcycled items at Made include coasters made from old vinyl records — Richards, for one, loves seeing albums he remembers from his past even though he doesn’t listen to records anymore — and key chain/bottle openers made from old bicycle parts. Another of his favorite items are drinking glasses made from beer bottles.

“I can’t say that I’ve ever been to anybody’s house and they’ve got a Rogue beer bottle drinking glass,” Richards said.

Dowdle’s workshop, a back bedroom in her North Lawrence home, is lined with racks of clothes — not just any clothes; all the fabrics have unusual textures, special fabrics or outstanding colors — and drawers labeled with descriptors like “luxury fabric scraps” and “crocheted pieces.”

In the summer, she makes things like tops and skirts out of T-shirts, silks or other lightweight fabrics. But her favorite pieces are her wool items, which she focuses on in the winter.

The transformation of that cast-off cashmere sweater, for example, starts with a trip through the washing machine and dryer. The process, called “felting,” tightens the knit and makes it extra soft. It also tends to ruffle or change the shape of the piece, and that’s where Dowdle’s visioning process begins.

A sweater with good shoulders can get a makeover with edging from a different colored sweater. A ruffled part might be cut just-so to become the flounce on one of her head warmers, and sleeves could become a bohemian-chic pair of fingerless gloves. Even tiny scraps become soft bracelets embellished with sparkly beads.

Instead of wasting a quality item, Dowdle said, people like the idea of finding ways to reuse it. They also like the unique results that upcycling creates.

“Everything is a one-of-a-kind,” she said. “I think people like to have something they know no one else will ever have.”