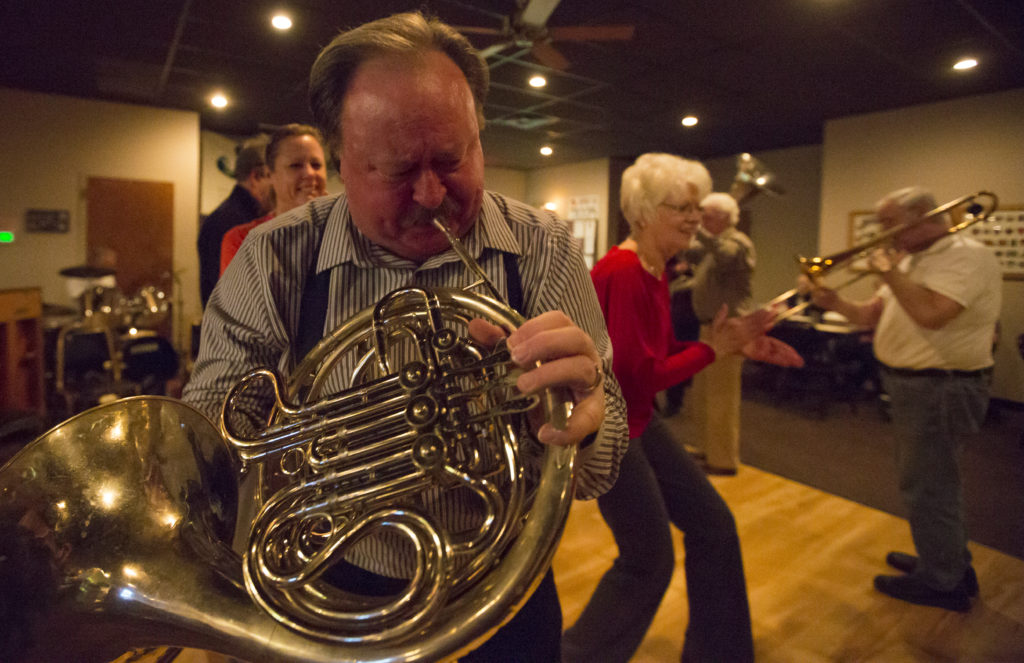 The Kansas Music Hall of Fame will celebrate its annual induction of new members with performances by some of the inductees themselves, including Lawrence’s Clyde Bysom and the Junkyard Jazz band.

The induction ceremony and concert is Saturday at Liberty Hall, 644 Massachusetts St. Doors open at 6:30 p.m., and the show starts at 7 p.m. Tickets are $30 each and can be purchased at the Liberty Hall box office or online at ticketmaster.com.

Also scheduled to perform are The Devastating Dinks of Salina, Exceptions of Topeka, Ray Hildebrand of Prairie Village, Playmate Blues Band of Hays and Tempests of Hays.

The other 2013 Kansas Music Hall of Fame inductees are Kerry Livgren of Berryton/Topeka, Chuck Mead formerly of Lawrence, Mystic Number National Bank of Kansas City, Steve Werner of Kansas City, and Wizards from Kansas of Lawrence.

The band is barely a bar into its jaunty rendition of “When You’re Smiling” before the first couple hit the dance floor.

A second pair soon follow — pausing only for the woman to dip her Mary Janes in the dance wax before they’re off and spinning, all smiles themselves.

For more than 30 years the Junkyard Jazz band has shared its more-the-merrier style of play with the Lawrence community, most notably as the main entertainment Thursday nights at the American Legion. This year the band’s artistry and longstanding popularity are being recognized in a big way, with a spot in the Kansas Music Hall of Fame.

The Hall of Fame inducts bands by name, rather than individual musicians, says president Bill Lee, of Lawrence.

That means Junkyard Jazz’s current players and the whopping estimated 150 or more musicians who’ve performed with the band through the years are all in.

Come one, come all

Why so many musicians?

That’s part of what makes Junkyard Jazz unique — it’s like a jam session on display and more or less maintains an open-door policy. That is, if you’re good enough to hang playing by ear.

Bass trombone player Jeff Young, of Osawatomie, recalls his confusion the first time he showed up to perform and didn’t see any music stands. He knew he was in for a challenge when another band member explained, “Well, we don’t play with charts.”

“You’re either going to put up or play,” Young says.

Junkyard Jazz performs many of the same favorites each Thursday, but “nothing is really cut and dried,” says alto saxophone player and acting Junkyard Jazz emcee Clyde Bysom, who at 95 is the most senior of the active members.

Band members improvise riffs and solos, and any given night there may be a different lineup of instruments and players. Some musicians play sporadically — occasionally this set includes a local high-schooler or college student — and others haven’t missed a show in years.

“People from the age of 13 to 14 all the way up to 95 or 96 are playing together, and that’s a wonderful thing,” says drummer Bruce Roberts. “These young musicians get mentored, and they’re creating a memory — ‘Hey, I played with Clyde Bysom when I was 14!'”

Junkyard Jazz started at the Elks Club in 1981.

On Thursday nights bingo players packed the dining room but the lounge sat empty, Bysom recalls. The late John Weatherwax asked the bartender if he could “bring in some horns and play some music” in hopes of drawing a crowd to the other side.

Weatherwax, Sherman Yacher and John Heitmeyer played the first show, and the band quickly gained members, including Bysom a couple of weeks later.

“For Weatherwax it was a social event, the more the merrier,” Bysom says. “We haven’t changed that.”

Many original Junkyard Jazz members served in World War II together, naturally leading to a group of fans looking for the dance music of that era.

For the most part, Junkyard Jazz still has the same fans, now at the American Legion.

“They’re just a good band to sit and listen to,” Crumet says. “They know the songs that we knew way back when.”

On a recent Thursday night — Valentine’s Day — up to six couples at a time took to the dance floor. Upbeat swing tunes brought out quick steps and spins, while numbers like “It Had to Be You” oozed with old-fashioned romance and close embraces in the dimly lit hall.

Bob and Margaret Bearse, of Lawrence, didn’t learn to dance until about four years ago, when they took lessons on a cruise. They’re at the Legion each Thursday, too, where Bob dances to every song — to the good fortune of a number of single ladies he takes for a twirl when Margaret needs a rest.

“It’s kind of like the ‘Cheers’ bar, where everybody knows your name,” Margaret says. “We really look forward to Thursday nights.”

A dozen musicians, give or take, usually play at the Legion. A smaller group makes monthly visits to Brandon Woods senior living community.

There, resident Ross Wilson, 93, is one of the band’s biggest fans. He was hooked the first time he heard them play.

“They had it,” Wilson says. “You could feel the beat.”

Wilson made arrangements for a bandstand banner to hang each time Junkyard Jazz plays at Brandon Woods. He can tell you about each musician by instrument — “That tuba player, oh man, he’s good!” — and, like other fans, says the band’s music takes him back.

Among his favorite tunes is “Indiana,” now a Junkyard Jazz special at Brandon Woods.

“Back home again in Indiana,” Wilson says. “That’s the place where I was born.”

Five or six years ago, the American Legion had 100 guests and a full staff on Thursday nights, bartender Troy Richardson says. Nowadays, there’s usually 20 to 40, with only Richardson pouring drinks.

In his 10 years at the Legion, Richardson has made friends with 30 or more regulars who have since passed away, he says. Others have moved into nursing homes or have health problems that prevent them from coming out.

The Junkyard Jazz banner that hangs behind the band when they play at the Legion lists names of dozens of longtime members, with stars next to the ones who have died.

There are a lot of stars.

That’s part of the reason it’s a good time to induct Junkyard Jazz into the Hall of Fame, Lee says.

“Let’s face it, they lose members every year, or past members,” Lee says. “It’s one of the realities of life whether we like it or not.”

That’s not to say Junkyard Jazz, the band, is going away anytime soon, Lee says. True to its inclusive roots, it should see new musicians coming on.

“Junkyard Jazz is probably going to be playing 25 years from now, but not with the same membership,” Lee says.

At 58, electric bass player Morey Sullivan, of Lawrence, is the youngest regular in the band. He’s been playing with the group about 12 years.

Sullivan worries that if musicians stop playing the old-fashioned music Junkyard Jazz is known for, it will be lost. As a professional musician, he considers this a responsibility.

“It’s important for musical history to keep playing this music,” he says.

Also, he believes Junkyard Jazz is vital to the community, shrinking fan base or not.

“They love it,” Sullivan says. “I think about that when we’re playing. I was taught to make sure the crowd is enjoying themselves — that’s why we do it.”