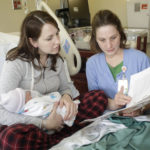 Cami Kennedy believed her newborn baby was deformed and schizophrenic. Delusional and hallucinatory, she thought it was a normal way for a first-time mother to feel.

It wasn’t until her daughter’s pediatrician recognized her symptoms as postpartum psychosis that Kennedy sought treatment. Now she wants to make sure other mothers don’t go through something similar.

“In our society, you feel like you have to do everything by yourself, so a lot of women don’t ask for help,” said Kennedy, 37, a Lawrence nurse whose daughter is now 7. “You want to be able to handle everything … but sometimes you just need some help and support around you.”

Kennedy is part of a local task force, led by another mother who went through a postpartum mood disorder, that aims to educate people in the Lawrence community and beyond about perinatal mental health.

Thanks to the work of Kennedy and others, awareness about these types of conditions appears to be growing in Lawrence. At Lawrence Memorial Hospital, for instance, providers in the obstetrics and gynecology office regularly screen new mothers for postpartum depression, while discharge nurses in the Birthing Center inform new parents about symptoms to look out for. Roughly 1 in 5 mothers will experience symptoms of postpartum depression or anxiety, with first-time moms and those with previous mental health issues the most susceptible.

Melissa Hoffman, a Lawrence nurse and childbirth educator, began spreading the word about perinatal mental health after she came down with a postpartum mood disorder following the birth of her first child. Even though she had a supportive family, she felt she had nowhere to turn.

“That was 10 years ago and there was nothing here in Lawrence. I was a labor and delivery nurse, a childhood educator — and I still wasn’t sure where to go for help,” said Hoffman, a 36-year-old mother of two. “I never want anyone to feel alone as I did going through it.”

So she’s essentially made it her life’s work — she’s now studying toward a doctorate with a focus on perinatal mental health — to increase public awareness about postpartum mental illness. She started a support group, Build Your Village, that meets regularly at Lawrence Memorial Hospital. She teaches childbirth classes, informing expectant parents about postpartum mood disorders. And she has traveled the state to educate agencies that work with children about perinatal mental health.

Carrie Wendel-Hummell, a doctoral candidate in the sociology department at Kansas University, said she prefers the term “perinatal mood disorders” to the more-often-used “postpartum depression.” That’s because new moms (and even dads) can suffer from a variety of mental illnesses — baby blues (temporary sadness in the days following birth), anxiety, obsessive-compulsive disorder, post-traumatic stress disorder (after a difficult labor and delivery), psychosis — with different severities. Remedies can also range from self-help to medication and counseling.

“I think the awareness message comes down to diversity: of conditions, of treatment options,” she said.

Many people are under the misconception that postpartum depression is only when women have feelings of harming their babies, a result of high-profile cases of mothers with forms of the disease who kill their children. This often prevents moms from seeking treatment, a stigma local advocates hope to overcome.

The Build Your Village group, for example, is not only for people suffering from mood disorders but also for mothers who just need support from other women in the same situation as them. One new mom attended a meeting recently because she had mental health issues in her family. Since then, she said, the group has become like a gang of friends who confide in and bounce parenting ideas off one another.

But many mothers aren’t as proactive. Kennedy, the Lawrence mom who suffered from postpartum psychosis, didn’t have an inkling that such a disorder was even a possibility.

“I had no history of depression or any problem, so it had never crossed my mind that it could happen to me,” she said. “It wasn’t an issue I thought I would have to worry about.”

Not seeking needed treatment for a perinatal mood disorder can put babies at risk for their own emotional or developmental disabilities later in life, said Michele Bennett, an ob-gyn specialist at Lawrence Memorial Hospital.

“They fail to thrive. They don’t bond as well. They have some social attachment issues. They’re at risk for (attention deficit disorder) spectrum down the road,” she said. So Bennett and her colleagues screen new mothers for symptoms at their 2- and 6-week postpartum appointments.

At the hospital’s Birthing Center, discharge nurses provide parents with the Edinburgh Postnatal Depression Scale, which mothers (and their partners) can use to check for symptoms.

“It’s important to teach moms as well as their spouses or partners,” noted Jody Keltner, a lactation consultant at LMH. “Maybe it’s a grandmother or baby sitter or nanny that recognizes the symptoms and refers the mother somewhere.”

Hoffman said she hopes new and expectant mothers take away three important lessons from her education: “First of all, you’re not alone — we know upward of 20 percent of women have this. You’re not to blame — this doesn’t say anything about the kind of mother you are or person you are. And, with help, you will get better — you will be yourself again.”