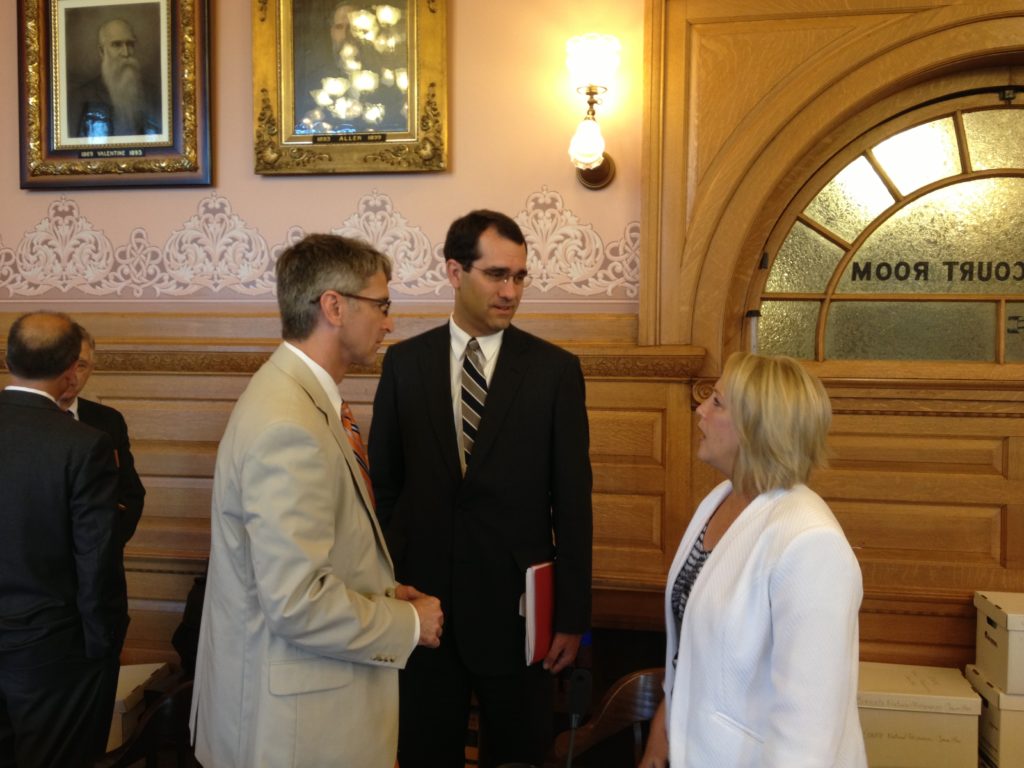 The so-called Hard 50 law was thrown into question by a recent decision by the U.S. Supreme Court.

Those sentenced to life in prison under the law must serve at least 50 years in prison before they can be eligible for parole.

But the Supreme Court in June ruled in an unrelated case that aggravating factors of the crime that qualify the defendant for a minimum sentence must be determined by a jury and not a judge.

Kansas Attorney General Derek Schmidt requested that Gov. Sam Brownback call a special session of the Legislature so that legislators could fix the law. Brownback set the session for Sept. 3.

That led to today’s meeting of the Special Judiciary Committee, where Schmidt offered a proposed bill that he said would address the court’s decision and put the jury in charge of determining whether aggravating circumstances, such as whether the victim was killed in an especially cruel manner, warranted a Hard 50 sentence.

There are currently 106 offenders in state prison sentenced to either a Hard 50 sentence or the older sentence of Hard 40. Under the proposed law, most of these would be re-sentenced before a jury, officials said. And there are 35 more offenders charged under the Hard 50 but who haven’t been tried yet. The initial estimated price tag on the extra proceedings is $878,408.

“We need to fix the problem and not just create more tune-ups down the road,” said Jessica Glendening, an attorney from Lawrence who serves on the board of the Kansas Association of Criminal Defense Lawyers.

But the committee, made up of House and Senate members, recommended introduction of Schmidt’s bill when legislators gather next week for what officials have promised will be a session of no more than three days.

During the meeting, prosecutors and defense lawyers clashed over several provisions.

Schmidt wants the proposed bill to apply to previous Hard 50 cases to ensure that those already sentenced or tried won’t have their sentences reduced so that they would be eligible for parole after 25 years.

Prosecutors from Johnson, Wyandotte, Sedgwick and Riley counties agreed, saying the Hard 50 was reserved for the “worst of the worst.” They argued that if the sentence were not re-applied to offenders whose fates may be in question because of the Supreme Court ruling, then those offenders would be up for parole after 25 years.

That would be too soon, they said, because some of the defendants who received the sentence were young enough that, if they were released after 25 years, they could commit further crimes. The prosecutors recounted several cases they had tried where defendants tortured and brutally murdered their victims.

But Glendening said making the Hard 50 changes retroactive would spawn more legal challenges and lead to more turmoil for the families of murder victims.

She said the state’s parole board would be unlikely to let any of those people out after 25 years. If the offenders failed to gain parole after 25 years, they would not be eligible again for another 10 years, she said.

Another proposal would allow the judge in a Hard 50 case to determine whether a defendant had a prior conviction.

But Randall Hodgkinson, with the state Association of Criminal Defense Lawyers, said that determination should be left up to the jury.

If juries were in charge of determining whether a prior conviction existed, prosecutors said they would have to re-try earlier convictions, which in some cases would be impossible because of the passage of time. But Hodgkinson said a prosecutor would simply have to enter the defendant’s conviction record in the new case.

Also during the meeting, key legislators indicated that when the 2014 regular legislative session starts in January they would take a broader look at the issue, perhaps passing a Hard 50 sentence for all first-degree murders.

In addition, state Sen. David Haley, D-Kansas City, Kan., said he would probably seek abolition of the state’s death penalty again, proposing that it be replaced with a sentence of life in prison without the possibility of parole.