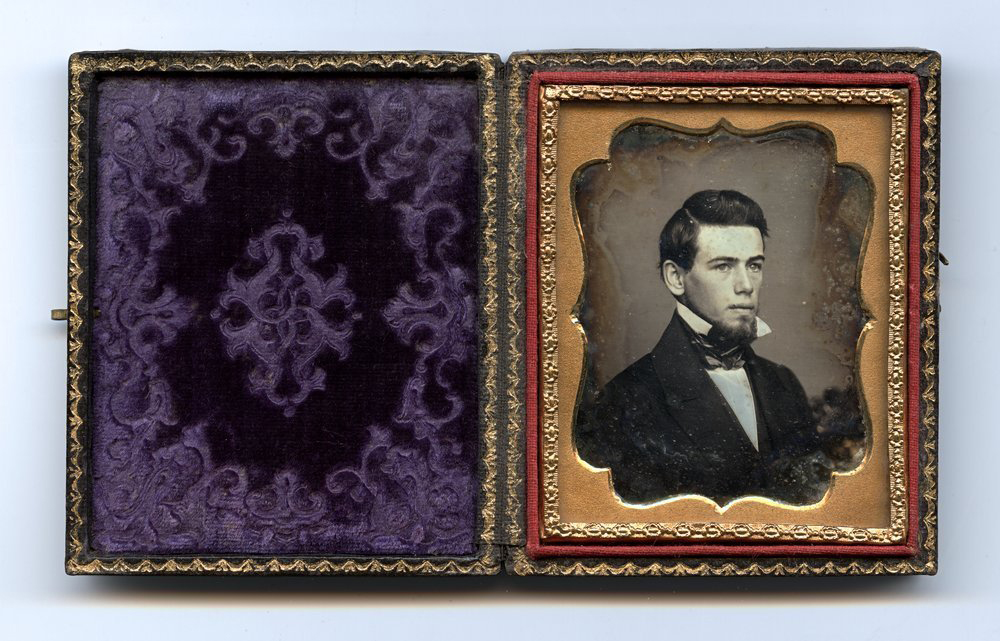 Image courtesy of KansasMemory.org, Kansas State Historical Society. Daguerreotype portrait of Edward Payson Fitch. Fitch, a free-stater who moved to Lawrence from Massachusetts was killed in Quantrill's raid as his wife, Sarah, and children looked on. A transcription of Sarah's letter to his parents telling of the raid is in the collection of the Watkins Community Museum of History.

Quantrill’s raid cut short many a family’s dreams and promise. Perhaps no account of the tragic events is as eye-opening — or as accurate — as one that is firsthand.

Lawrence resident Sarah Fitch penned a long letter to her parents-in-law on the East Coast just two weeks after Quantrill’s raid, with details of the horrifying day still fresh in her mind.

Letters containing first-hand accounts of Quantrill’s raid may reside in dusty attics around the country, but fortunately many are protected in museums and libraries.

The Kansas State Historical Society has several in its collection that can be viewed online at KansasMemory.org. Letter-writers include raid survivors H.M. Simpson, John Stillman Brown and Mary Savage.

The Kansas City (Mo.) Public Library also houses periodicals that reprinted several letters. Eyewitness accounts by Erastus D. Ladd, Sophia Bissell and Sidney Clarke are cataloged online at kchistory.org and available to view in person at the library, 14 W. 10th St. in Kansas City, Mo. The Bissell and Clarke letters were transcribed and featured in a Kansas History article by Fred Six of Lawrence, a former Kansas Supreme Court justice.

At Kansas University, the Spencer Research Library has letters by people who experienced the raid. Items are viewable in person but catalogued online at spencer.lib.ku.edu.

She tells of a delightful evening walk with her husband, Edward Payson Fitch, then the next morning when the “ruffians” burst through their door, emptying bullet after bullet into Edward at close range “to make sure work of death” as she and her young children looked on.

Sarah conveys the sights and sounds as she and her children fled, writing of burning houses and groans of the wounded. She also tells of what happened next, how Edward’s planned funeral was pushed back because their pastor had performed so many others he was exhausted, how she tries to stay cheerful in front of the children though her heart is breaking, and how she is able to obtain provisions and shelter and begin to resettle.

Sarah Fitch’s story is one of personal loss, but also captures the entire town’s predicament.

“Such cold blooded butchery was never before seen,” she writes. “- such deliberate, hellish cruelty – not one of the newspaper reports that I have seen exaggerated – the half is not told.”

Hundreds of pages of letters written by the Fitches are found in “Yours for Freedom in Kansas: Letters of Edward and Sarah Fitch” (copyright Watkins Community Museum of History), a transcription of original letters owned by Roger Fitch. The following passages from Sarah’s letter about the raid, edited slightly for readability, are republished with permission of the museum.

My dear Father and Mother

By mistake this half-sheet was left & I cannot let blank paper go. A letter came from John last night to Edward. he is near Fort Blunt Cherokee Nation & expects soon to be ordered to Texas. I am going to write him immediately. I will tell you of a few who fell that day. You remember Mrs. Collamore whom you went to see in Boston with Edward? Her husband Gen. Collamore was our Mayor. He was killed, his oldest son severely wounded, his house burned, everything of value taken – his second son made sick with brain fever in consequence of excitement, and last week she returned to Boston with her dead husband & two sick sons – without a dollar & scarcely a change of clothing – tho she has abundant means in Boston. Have we not mentioned in our letters a young man by the name of Tritch who was clerk in the store & boarded with us. For nearly a year he was an inmate of our family & loved by us all as a brother. Edward loved him so much. He was found dead in the street – pierced by six bullets – & on us devolved the task of sending the news to his friends, among them a sweet young girl he was soon to be married to. God help all the desolate hearts. I must tell you of one sad house. Dr. Griswold, a warm friend of E’s had on Thursday returned from a visit East with his wife & two children. When I was up at the store on Thursday Eve. he came in & he was so happy to be home. At his house boarded Trask, editor of State Journal, son of Rev. Mr. Trask of Mass. – L.M. Thorp a splendid man, member of the Legislature – & Mr. Baker one of our first merchants. A detachment of the ruffians went to the house, called out these four men by shouting as they rode up. “The rebels are in town. Rally & help us drive them out” & the four victims rushed to the door to learn more & were deliberately shot down with their wives shrieking and pleading by their sides. Dr. G. and Mr. Trask were instantly killed. Mr. Thorp died next day. Mr. Baker is still lingering on suffering & may possibly recover – all young – noble men – Trask & Baker married last winter, the other two but a few years. From the windows of my room, I see in one direction – the blackened ruins of two homes – from the back window – six ruined houses & in full view a large brick house lately built by one of our most promising young lawyers Judge Carpenter – married last winter to Miss Barbour from Sherburne, Mass. He was fired upon, he ran thro the house, thro the cellar his life blood gushing at every step. The ruffians followed; still firing till C. fell to the ground – his wife threw herself upon him & tried to protect him but the wretch cooly lifted her arm placed his pistol under it & fired again to finish the deed – But its too harrowing to both of us to relate such details. I will send this to you – & I judge Appleton and his wife are still with you – as he does not mention his return to Peoria. If he is not there would you not send this letter to him – as I would like him to know all – & it seems almost more than I can do to go over all again now; I love you all. I feel for you all – All that Edward loved, and all who loved him will ever be sacred to me – & I wish we were nearer you that E’s children might learn to know & love their father’s friends. Pray for me. I need strength more than human hands can give. Sometimes I can rise above & seem to see beyond the cloud – & can say – “Do all Thy will – for it is good.” but tis only for a short time & poor nature sinks & the clouds seem impenetrable & God seems afar off – must I live so for years, perhaps without my Edward – my stay – my support – my almost idol – I am thankful that I have his children to live for – to do for – to train them to fill his place – may God help me to do my duty to them for his dear sake. Will you not write to me as you used to him for I need your letters & I will try to write for him for I cannot bear that his children should grow up without a knowledge & love for his friends. Yours in love & sympathy, Sarah