Louie Schwartzberg thinks we should pay closer attention to pollinators. They are, after all, keeping us alive.

The groundbreaking cinematographer hopes his new Disneynature film, “Wings of Life,” can help shed light on the importance of the winged creatures and how environmental degradation is decimating their natural habitat. 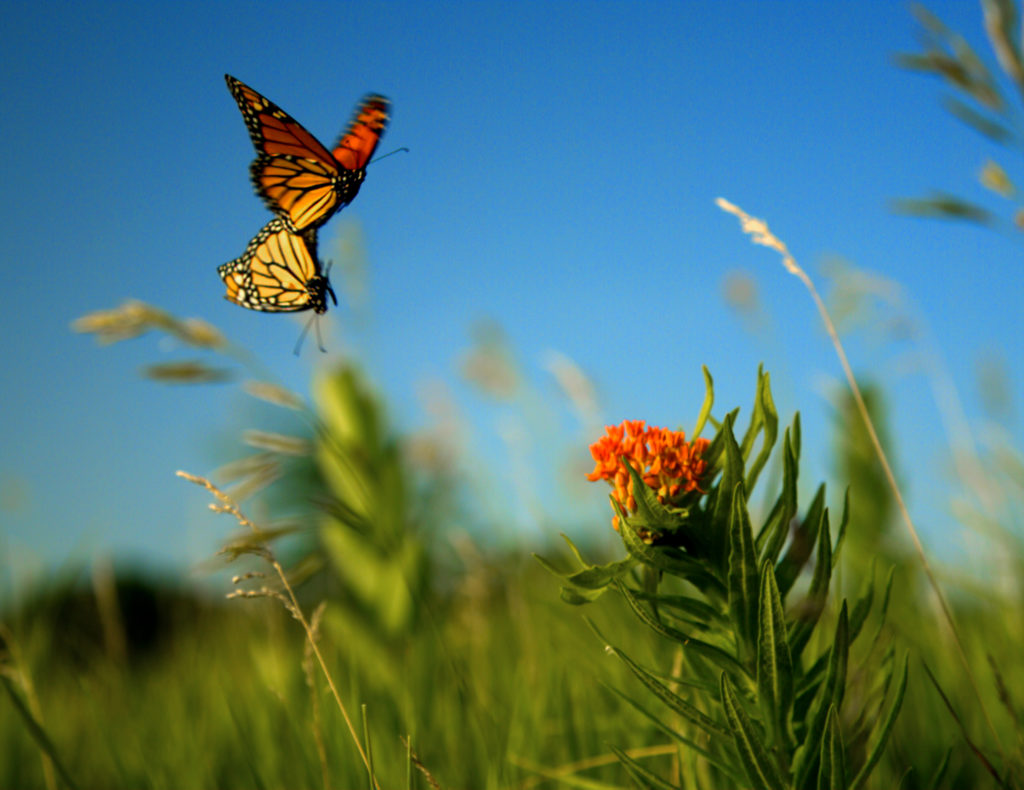 In the middle of a milkweed field in Lawrence, two monarch butterflies mate as they fly through the air, in this scene from the documentary “Wings of Life.” Film crews spent 14 days in the summer of 2010 in the Lawrence area, shooting milkweed fields in Douglas and Johnson counties. Chip Taylor, a Kansas University professor and expert in monarch butterflies, was an adviser for the film. Taylor also spent time with the production team in the monarchs’ winter home in Mexico. 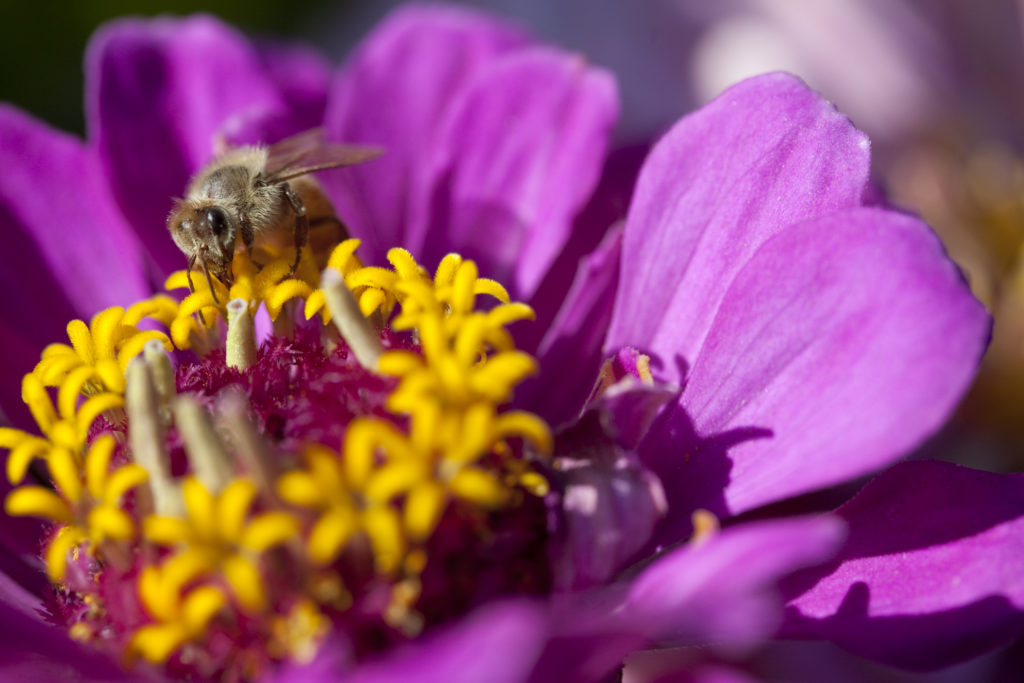 Hard at work, a honeybee finds nectar on a zinnia blossom. 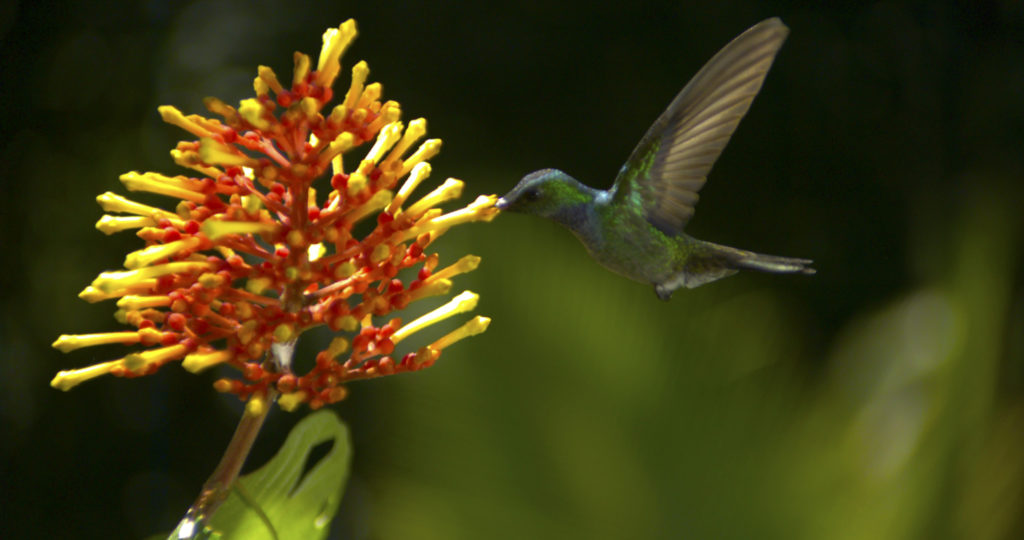 A male blue-chested hummingbird finds a budding Rubiaceae blossom to drink nectar from. 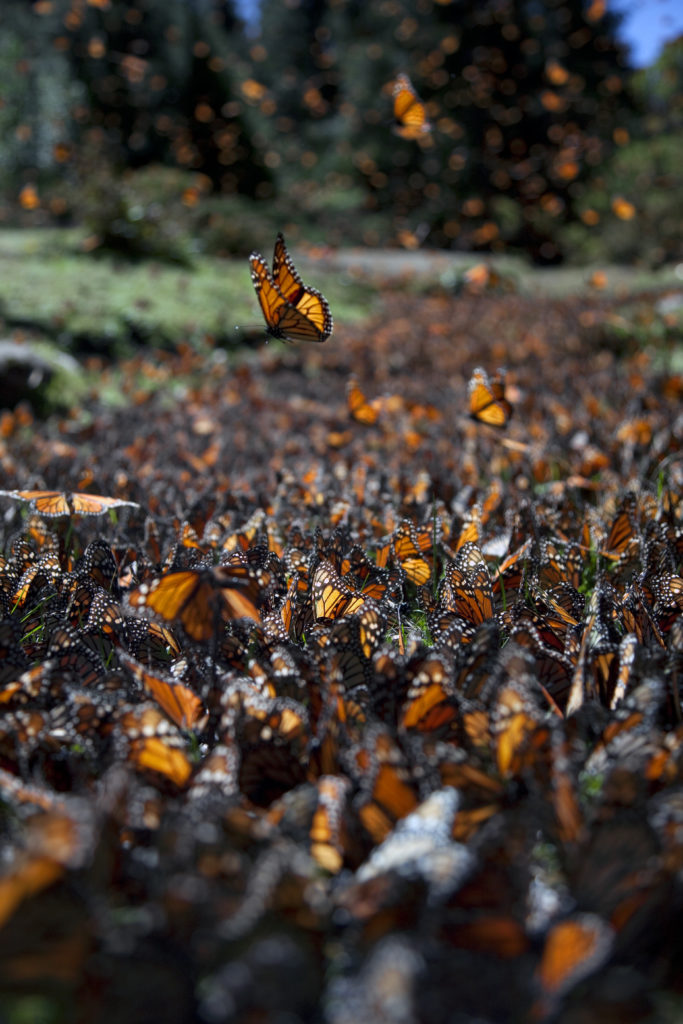 Thousands of monarch butterflies flutter around looking for the perfect spot to quench their thirst. 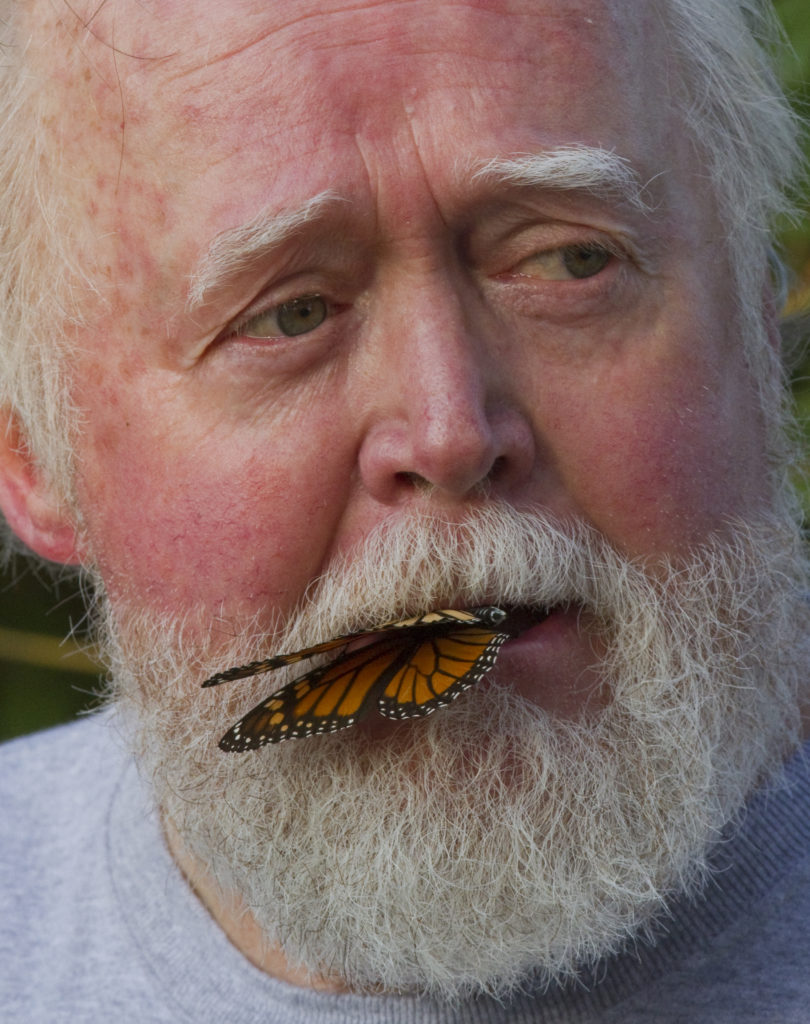 Monarch watch director Chip Taylor holds a butterfly gently in his mouth while conducting a brief class Sept. 18, 2010, at a monarch tagging event in the Baker Wetlands. 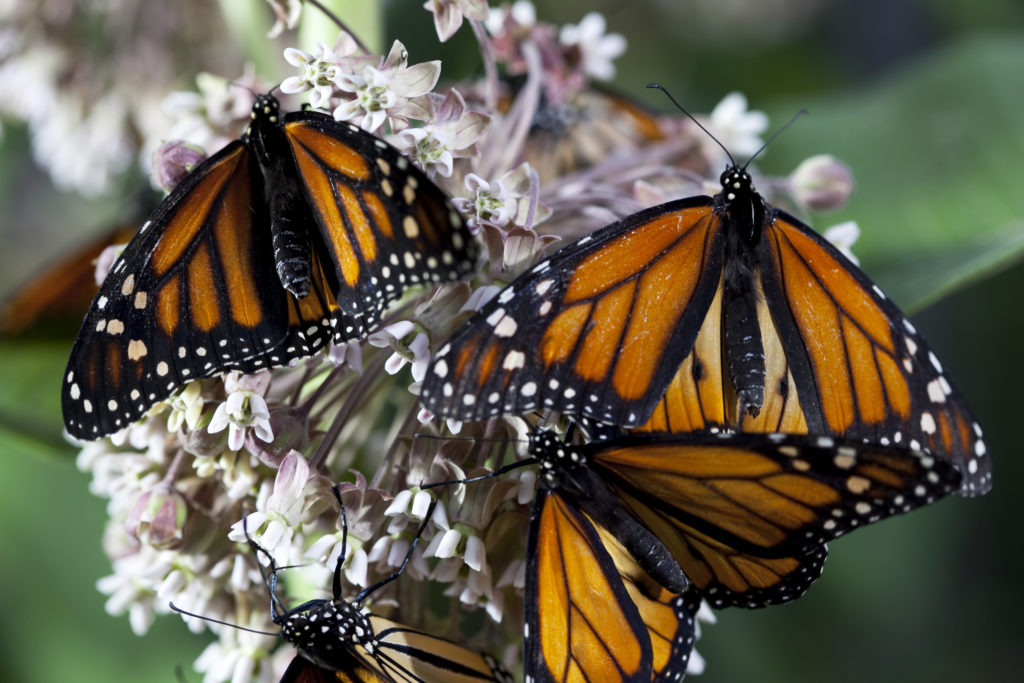 Monarch butterflies aid in the process of pollination as they collect nectar from Asclepias flowers in the Disneynature documentary “Wings of Life.” The movie that gives a close look at winged creatures and how environmental degradation is decimating their natural habitats was partly filmed in Lawrence. 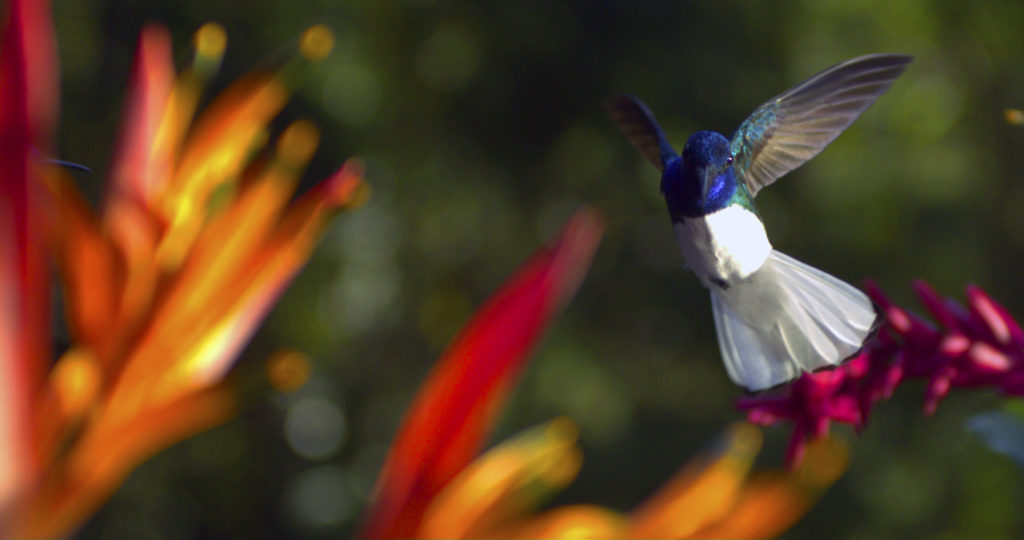 The white-necked jacobin hummingbird shows off its colorful wingspan as it soars past some Heliconia blooms. Directed by Louie Schwartzberg and narrated by Meryl Streep, “Wings of Life” is now available for purchase on Blu-ray and digital download.

Schwartzberg filmed part of the movie in Lawrence, where he was advised by Chip Taylor, a Kansas University professor and expert in monarch butterflies. “Wings of Life,” which is narrated by Meryl Streep, was released Monday on Blu-ray, digital download and on-demand.

The director is considered a pioneer in time-lapse photography, and has been shooting flowers in a studio nonstop — 24 hours a day, seven days a week — for the past 35 years.

“I developed a sense of wonder because I was able to see things … the naked eye couldn’t see,” he said.

More recently, new technology has allowed him to get his camera to within millimeters of birds and insects without losing focus in the background.

Years ago, Schwartzberg caught wind of the issue of colony collapse disorder, in which honeybees are dying en masse because of new types of pesticides farmers are spraying on their crops. It taught him the significance to our ecosystem of bees and their pollinating brethren.

“These pollinators are critical to our survival on the planet. A third of the food we eat comes from a pollinating plant,” Schwartzberg said in a recent interview. “Scientists say the loss of bees and pollinators may be the most critical issue facing humans.”

He relayed a quote attributed to Albert Einstein: “If bees disappear, man will only have five years left to live.”

Schwartzberg chose to focus “Wings of Life” on the pollination cycles of bees, hummingbirds, bats and monarch butterflies; he filmed the latter’s 2,000 mile migration across the U.S. as they fed on milkweed plants. Because of the proliferation of herbicide-tolerant corn and soybean crops in recent years, the butterflies’ habitat has been depleted, so much so that the monarch’s migration is currently at its lowest level in decades.

Schwartzberg filmed the butterflies mating and laying eggs “smaller than a pinhead” on milkweed plants. He later recorded the eggs maturing and birthing caterpillars.

The detailed nature of the photography showed Taylor something he had never even seen before: caterpillar pupa formation, which is over in about a second but, with Schwartzberg’s film technology, could be slowed down significantly.

Film crews spent 14 days in the summer of 2010 in the Lawrence area, shooting milkweed fields in Douglas and Johnson counties. Taylor also spent time with the production team in the monarchs’ winter home of Mexico.

In Lawrence, Schwartzberg also filmed volunteers planting wildflowers along the highway, which he cites as one solution to creating more habitat for pollinators. Other options he mentioned include turning your lawn into a vegetable garden, eating organic food and supporting organic farmers, and teaching children where their food comes from. Most of all, he said, “We have to be conscious of the choices we make with genetically modified seeds.”

Another solution is right in our own backyard.

“You’ve got a champion, a hero in your community,” he said, referring ot Taylor. “Chip goes into his own pocket to tag butterflies in Mexico so they can track the migration. Nobody’s funding this kind of research.”

He was speaking about Taylor’s Monarch Watch program, in which the professor tracks and analyzes the monarch migration. He has also developed several initiatives to restore their habitat, including having people install monarch way stations and plant native milkweed species across the country.

Taylor said it’s important for the public to recognize that this issue is not just about monarchs. As the butterflies go, he says, so go many other forms of life.

“The monarchs are telling us … that we are not doing a very good job of being stewards of own country, much less the planet,” he said, adding that while the species will most likely live on, it is their migration that is at risk of extinction.

Not only has the introduction of Roundup Ready seeds in the early 2000s decimated the butterflies’ migration, Taylor said, so has the government’s promotion of biofuels, which has increasingly caused farmers to turn native habitat into cropland.

Anything that can bring more attention to monarch butterflies and their migration is, for Taylor, a positive. And he said “Wings of Life” does it in a beautiful way.

“The film that Louie has made is truly the best film I’ve seen of monarchs in terms of really showing the ballet aspect of their flights,” he said. “Because if you slow it down, you can see every nuance of how the wings and the body move together. That makes it really fascinating from a biological point of view, but it makes it very interesting to look at from an artistic point of view, as well.”