Opinion: Olympian’s pursuit of track sponsorships a race worth running

He twice has run in the Olympic Games, is known as the “Brad Pitt of track and field,” reportedly dated Paris Hilton, and if his cause gains the traction it deserves, he could be known as the athlete who did more to grow his sport than anyone in the 21st century.

But before looking at what makes Nick Symmonds such an important figure in a sport that captivates our nation every four years and then goes back into hibernation, consider the event that he completed faster than any American on record. 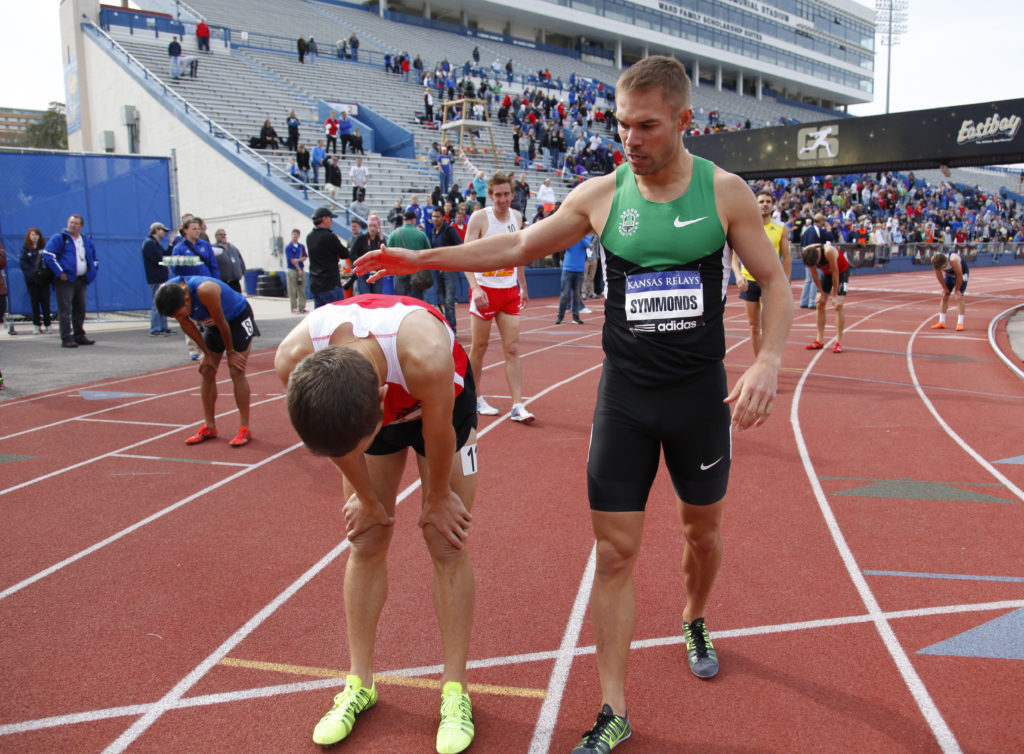 Symmonds placed third Saturday in the Kansas Relays’ Glenn Cunningham Mile with a time of 4:00.21, and the mile is no better than his fourth-best event, ranking behind the 800 meters, the 1,500 meters and the Beer Mile.

After competing in his second consecutive Olympic Games in the 800 meters in 2012, Symmonds wrapped up his track season by running a 5:19 Beer Mile, an American record.

The rules for the event, which no sanctioned track meet wants to get anywhere near, are listed on beermile.com. The most important ones: 1. Each runner must drink a 12-ounce beer, run a lap, stop and repeat those two steps four times; 2. Any runner who vomits during the race must run a penalty lap.

“They won’t tell you this around Kansas, but I’m sure the cross country and track and field teams come out late at night and do the same thing,” Symmonds said through huffs and puffs after nearly breaking the four-minute mile barrier. “I used to do it all the time in college. After the Olympics, I told myself I’ve worked hard for four years to be in this race, I’m going to go home and have a little fun. So I got my buddies out on the track and we did a beer mile. It was fun.

“They said it’s the American record. No American has run faster, so I’m pretty proud of it. It’s the only record I have in track and field right now. I’ll take it. I’m proud of that one.”

He said he usually averages between 12 and 15 seconds to drink the can of beer while stopping between laps, but can chug the first one in eight seconds.

Symmonds attempted to line up a beer company to sponsor his record run, figuring the 100,000 hits it would get on YouTube would make for good marketing for the brand of beer consumed.

“I had a couple of beer companies that were very interested,” he said. “Their legal departments said, ‘We don’t want any part of this.’ They’re afraid of endorsing binge drinking.”

Symmonds also is sensitive to that, which is why on the video he says, “I’m over 21. I have a designated driver. I’m only drinking four beers here. I’m being responsible. Don’t do this if you’re not 21.”

He did it for kicks. He’s much more serious about his true passion. He’s determined to see the abolishment of the rules that forbid the sport’s athletes from using their uniforms and/or bodies to advertise products.

“The next step is getting the TFAA (Track and Field Athletes Association) to have a loud voice, a collective voice on this,” Symmonds said. “That’s how these professional sports work. You have the athlete union that has the collective athlete voice being heard. I can make as big of a stink as I want, but until athletes like Sanya Richards Ross are on board, until athletes like Usain Bolt are on board, it’s very difficult for us to affect much change.”

Symmonds has worn temporary tattoos marketing companies and covers them up with tape for races. He used his business relationship with Melaleuca, which bills itself as “The Wellness Company,” as an example of how corporate sponsorships with athletes help to grow his sport.

“I get e-mails from all over the world from employees of Melaleuca, saying they’re so excited I like the products,” he said. “Every one of them gets a leaflet every quarter about what I’m up to. That’s a way to build the whole pie that is track and field, by building a personal relationship with somebody. So everyone in that company becomes a Nick Symmonds fan through our mutual use of a product and then from watching me they (develop other favorite track and field athletes competing in the same meets as him).”

He’s right about that. Allowing the athletes to market companies during races would grow the sport.

“I don’t think we need to look like NASCAR,” Symmonds said. “If you look at golf, the Masters the other day, for example, they have a logo on their hat, maybe two logos on their chest, the ball and the clubs. There’s room for everybody there. I’m not saying I need to be covered head to toe in decals, but the IAAF (International Association of Athletics Federations) needs to set aside a bit of space that says, ‘This is for athletes to advertise, to market and sell the space for themselves.'”

Sponsorship of an annual, nationally televised Beer Mile would grow the sport, too, but that’s a tougher battle he’s not as interested in fighting. Not yet anyway.