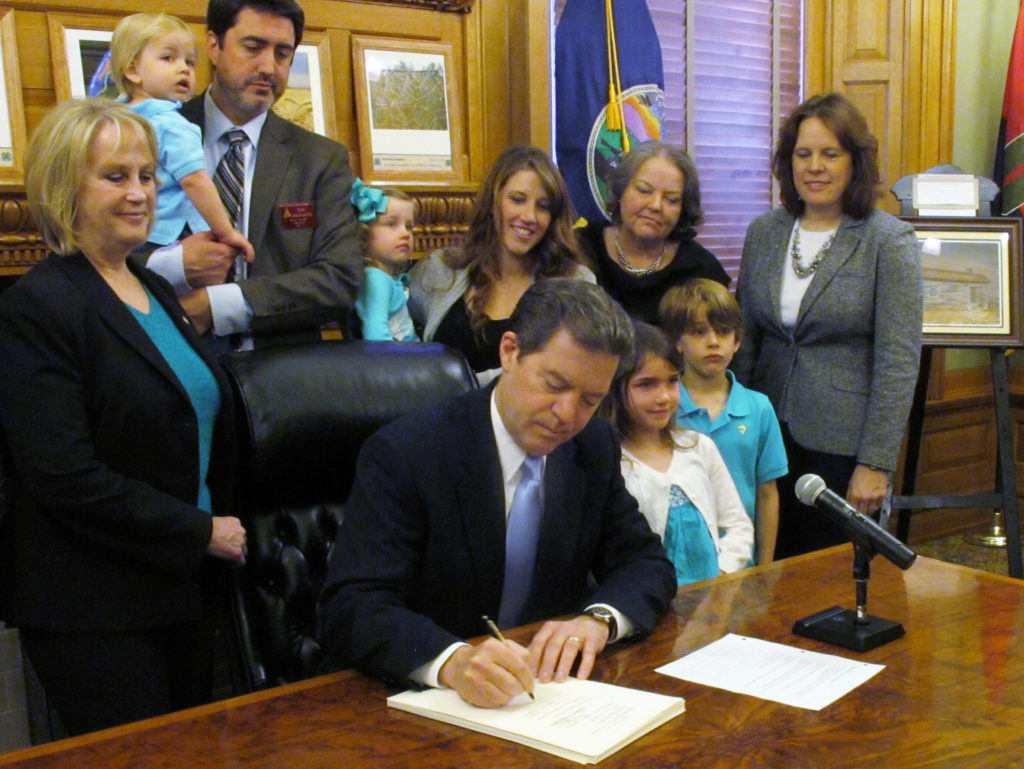 Kansas Gov. Sam Brownback signs a sweeping anti-abortion bill into law during a Statehouse ceremony Friday in Topeka. He is surrounded by legislators, abortion opponents and the family of Michael Schuttloffel, to the left just behind Brownback, a lobbyist for the Kansas Catholic Conference. 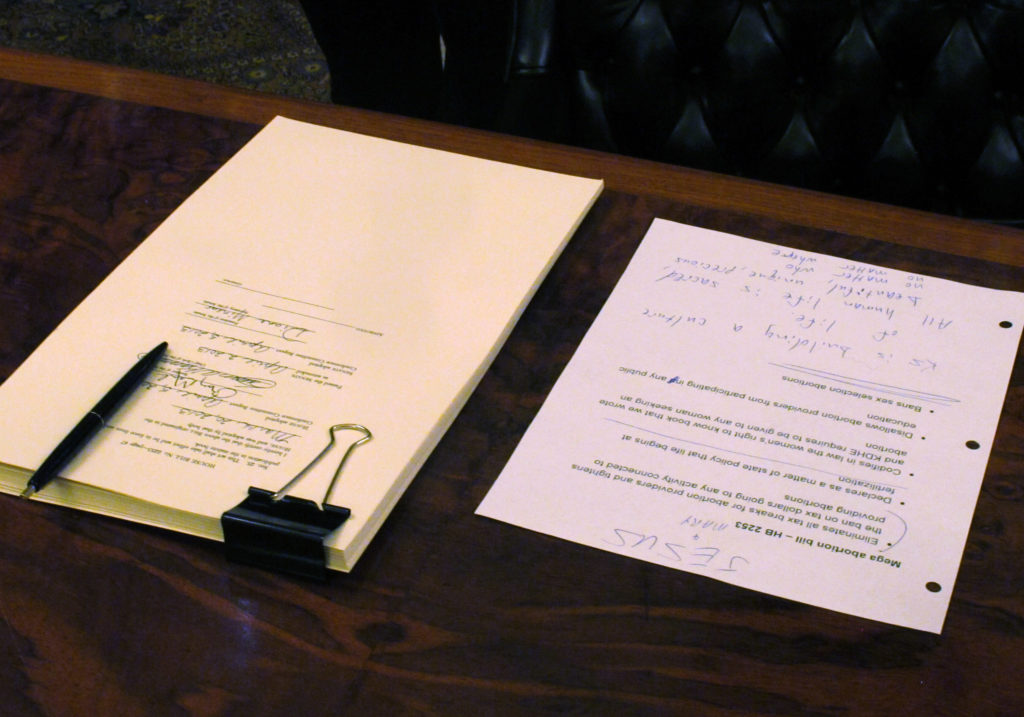 Anti-abortion legislation, left, sits on a desk in Kansas Gov. Sam Brownback’s ceremonial office as he prepares to sign it Friday at the Statehouse in Topeka. At right is a page of Brownback’s notes about the measure with “JESUS + Mary” written at the top. Further down the page are handwritten notes spelling out Brownback’s belief that the bill would create “a culture of life.”

Many provisions take effect in July, though the tax changes will be effective for 2014. The measure cleared the Republican-dominated Legislature by wide margins earlier this month.

The GOP governor is a strong abortion opponent who urged lawmakers to create “a culture of life” after taking office in January 2011.

“All human life is sacred. It’s beautiful,” Brownback said just before signing the measure, flanked by abortion opponents. “With this, we continue to build this culture of life in our state.”

An Associated Press photo taken before the signing shows a page of notes about the bill on Brownback’s desk that included a handwritten message at the top: “JESUS + Mary.” Further down the page were typewritten notes spelling out Brownback’s belief that the bill would create “a culture of life.”

Brownback’s communications staff was in a meeting Friday afternoon and did not immediately return messages seeking more information about the notes.

Supporters of the new law contend it will lessen taxpayers’ entanglement with abortion and declare the state’s intent to protect life at all stages. The measure is not as restrictive as laws enacted this year in North Dakota and Arkansas to ban abortions even early in pregnancy, but abortion rights supporters still believe it will significantly restrict access to abortion services.

The bill also prohibits abortion providers from being involved in public school sex education classes and spells out in more detail what information doctors must provide to patients seeking abortions.

The new law’s language that life begins “at fertilization” worries some abortion rights supporters, who believe it could be used to legally harass providers with lawsuits.

“Politicians should not be involved in a woman’s personal medical decisions about her pregnancy,” he said in a statement. “Let’s let real physicians practice medicine — not the ‘pretend doctors’ in the Statehouse.”

But abortion opponents call the fertilization language a statement of principle and not an outright ban on terminating pregnancies. The new law specifically notes that any rights suggested by the language are limited by decisions of the U.S. Supreme Court protecting access to abortion.

In contrast, a new North Dakota law bans abortions as early as the sixth week of pregnancy and a new Arkansas law prohibits most abortions after the 12th week.

Kansans for Life, the most influential anti-abortion group at the Statehouse, has argued against pursuing such proposals in favor of less dramatic changes that are more likely to hold up in court.

The provisions in the new Kansas law dealing with tax breaks are designed to prevent the state from subsidizing abortions, even indirectly. For example, health care providers don’t have to pay the state sales tax on items they purchase, but the bill would deny that tax break to abortion providers. Also, a woman could not include abortion costs if she deducts medical expenses on her income taxes.

Lawmakers moved to ban abortions that are prompted by the baby’s gender without any solid data on how many sex-selection procedures are performed in Kansas. A 2008 study by two Columbia University economists suggested the practice of aborting female fetuses — widespread in some nations where parents traditionally prefer sons — is performed in the U.S. on a limited basis.

But legislators on both sides of the issue said the practice should be banned, regardless of how frequently it occurs.

The bill also would require physicians to give women information that addresses breast cancer as a potential risk of abortion. Advocates on both sides acknowledge there’s medical evidence that carrying a fetus to term can lower a woman’s risk for breast cancer, but doctors convened by the National Cancer Institute a decade ago concluded that abortion does not raise the risk for developing the disease.