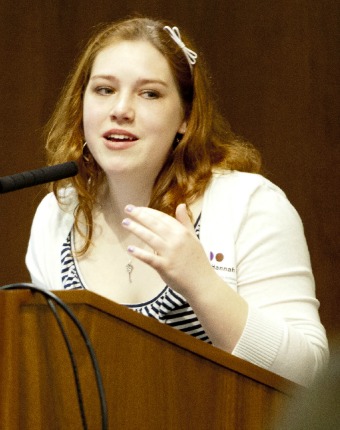 Kansas University junior Hannah Sitz speaks at an April 7 KU Honors Program gathering after being surprised with the announcement that she had won a Harry S. Truman Scholarship. Sitz is the 17th KU student to be named a Truman Scholar and one of 62 winners around the U.S. for 2013.

When Hannah Sitz walked into the Kansas University Honors Program office last fall, she’d made her decision: She wasn’t going to apply for a Harry S Truman Scholarship.

But by the time she walked out, her mind had been changed. And about six months later, the KU junior from Andover is the university’s 17th-ever Truman Scholar.

KU announced the scholarship, which provides up to $30,000 for graduate school, Thursday.

It was Anne Wallen, a coordinator for the Honors program who helps students apply for national scholarships and fellowships, who told Sitz that day that she’d be perfect for it.

“She talked me into doing it, and I’m so glad she did,” Sitz said. “Obviously.”

Sitz is one of 62 college juniors from around the United States to win Truman Scholarships for 2013, picked from 629 students nominated by their schools. She’s the first KU Truman Scholar since Michelle Tran in 2006.

“The Truman Foundation says that they’re really looking for people who want to make a difference,” Wallen said, “and so you want to see students who already are making a difference.”

Sitz fits that bill, Wallen said. She’s on track to graduate with highest distinction, Wallen said, and she’s a co-director of the KU Alternative Breaks program, which sends students on weeklong service trips during their spring, summer, fall and winter breaks as well as on weekend projects during the school year.

She started volunteering in high school, when she organized trips for her church youth group to volunteer at a soup kitchen in downtown Wichita. And she came to KU hoping to one day work for a nonprofit organization, maybe in public relations.

When she went on Alternative Break trips during the winters of her freshman and sophomore year, she said, she found a whole new passion. She worked with homeless people in Atlanta, and saw how one aging center in Nashville had a chandelier and a grand piano while another one in the inner city resembled a trailer.

“People have life-changing experiences on these breaks, and really learn and understand some of these social issues,” Sitz said.

She said she wants to work in human services, to help people overcome inequalities of opportunity. She said she felt bad about using those experiences as lines on her resume in a scholarship application — until the folks at the Honors Program told her she didn’t have to be so humble.

For the Alternative Breaks program, which is run entirely by students, Sitz helps manage trips for about 600 students each year.

“I have the opportunity here and now as a 20-year-old junior to basically be running the equivalent of a nonprofit,” Sitz said, “and that’s really cool.”

She has met with deans of the different KU schools to ask them to provide scholarships to pay for students’ travel costs, so more people could go. This year, they’ve provided 70 in all.

“What’s really remarkable about Hannah is how really devoted she is to getting other students involved in public service,” Wallen said.

The Honors Program surprised Sitz with the news on Sunday at a reception that she thought was just to welcome visiting prospective students. (She works as an ambassador for the Honors Program, one of a host of different roles she fills on campus.) Sitz had been waiting and waiting for a month since her Truman interview in March, thinking the news wasn’t due until Wednesday.

Her sister is coming to KU next year, so she and her mother were there with Hannah when Honors Program Director Kathleen McCluskey-Fawcett made the surprise announcement.

“My face went white, and then red,” Sitz said, “and then I started crying.”

KU Chancellor Bernadette Gray-Little took to the lectern to congratulate her, but Sitz couldn’t tell you what she said.

Sitz now plans to pursue a Master of Public Administration somewhere, hoping to run a nonprofit or maybe a city one day. For her scholarship, she credits Wallen and others at KU who help scholarship applicants prepare applications and go through mock interviews, who she says made her “look good.”

Wallen, too, said that a lot of people at KU work to help students such as Sitz succeed. But few students are more deserving, she said.

“She’s just a really vibrant and wonderful person to be around,” Wallen said.