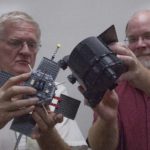 Professor Emeritus Tom Armstrong, left, holds a model of a satellite while Dr. Jerry Manweiler handles a model of a device their company, Fundamental Technologies, makes that is mounted on the satellite that measures radiation rings around the Earth and how it affects cellphones. ABOVE, an image provided by the AP and NASA shows an image taken by the Voyager 1 spacecraft of a volcanic plume on the Jupiter moon Io. Voyager 1 is poised to soon leave the solar system.

Tom Armstrong is preparing to leave this solar system.

At the moment, you couldn’t tell. He sits in his modest Lawrence office surrounded by a few scribbles on a white board, piles of NASA promotional materials for elementary schools, and a Lego model of a spaceship.

But about 11 billion miles from here, there’s another spaceship. Voyager 1, launched 35 years ago this month, is creating heart palpitations in the community of space plasma physicists, of which Armstrong belongs.

Data being sent back from Voyager, essentially big dips on a line graph, suggest the spacecraft is very close to becoming the first man-made object to ever leave our solar system.

When it does, it will have Tom Armstrong’s name on it. Armstrong, a professor of physics at Kansas University from 1968 to 2003, had the “great fortune” of studying with one of the generation’s leading space scientists, James Van Allen at the University of Iowa. In the 1960s, Van Allen and a group of his graduate students were among the more vocal supporters of an idea for NASA to create a “grand tour” of space. A ship — or actually a pair of them — that would fly by Jupiter, Saturn, Neptune and Uranus.

By the time the ships launched in 1977, Armstrong had helped design one of the key scientific instruments on the vessels, and he and a group of other scientists signed their names on a piece of microfiche. Presumably, it remains today, to be read by …

“After the aliens figure us out and find us, they’ll know who to look for,” Armstrong says with a grin.

These days, you’ll have to forgive Armstrong if he believes almost anything is possible. A vessel he helped create is about to do what was once reserved only for comic books and science-fiction novels. It is set — probably sometime this year — to leave the solar system and go into the world known as interstellar space, the vast unknown openness between solar systems.

When a visitor asked him whether he gets caught up in the moment, he didn’t hesitate.

“Yes, in a word,” Armstrong said. “Who wouldn’t? Nothing has ever been there before. This is new. It is really new.”

When Voyager 1 does cross that galactic boundary, a little nine-person company in a metal Butler-style office building on Ponderosa Drive in southeast Lawrence will be among the first to know.

To this day, Lawrence-based Fundamental Technologies, a company owned by Armstrong and fellow scientist Jerry Manweiler, still gets paid by NASA to process and analyze data gathered by Voyager. Between the Voyager program and the several other NASA projects they work on, the company has about three terabytes of data from space.

When Voyager crosses into interstellar space, the data is expected to keep coming.

“We’ll still keep getting data, and it will get very interesting,” Armstrong said.

The fact Voyager is still producing anything at all is interesting enough. The ship is powered by 1970s technology, and the entire vessel runs off a mere 30 watts of electricity.

It is that ship — built when eight-track cassettes were cutting-edge technology — that now has the greatest potential to answer questions that have caused men to wonder for centuries.

Yes, astronomers have been using their Earth-based instruments to surmise the workings of deep space for years. But what is about to happen is different, Armstrong said.

“Astronomers deal in light and maybe radio waves,” Armstrong said. “If it can’t be sensed by radio waves or light, who knows what is out there?

That’s not the only mystery the Lawrence-based business will be trying to solve. Fundamental Technologies has the distinction of working on one of the older space projects still going — Voyager — but it also is playing a major role in the newest space mission as well.

On Aug. 30, an Atlas 5 rocket launched another, less-publicized spaceship into orbit. Fundamental Technologies has a piece of equipment on that ship as well.

Actually, it is an advanced version of the same piece of equipment that is on the Voyager.

“You can think of it as a really high-tech Geiger counter,” said Manweiler, who is the managing partner for Fundamental Technologies.

It is an important piece of equipment to understand the sun and the radiation it produces. Understanding the sun is the core business of Fundamental Technologies.

This new space project — currently named the Radiation Belt Storm Probes mission — puts a space craft deep into the outer radiation belt that surrounds the Earth. The belts are called the Van Allen Radiation Belts, named after the professor Armstrong studied under at Iowa.

The radiation research may not garner as many headlines as the Voyager project, but Manweiler said it has the potential to have great impact on everyday life. The radiation belt — specifically its expansion and contraction — can cause significant problems for a host of satellites and other equipment — everything from the devices that power the GPS systems in cars to the wide array of high-tech military equipment that circle the globe.

Manweiler said the changing conditions in the radiation belt is called “space weather.” And if you think weather here on Earth can be rough, well, get ready to learn about space weather. In 1989, a massive solar event created a large geomagnetic storm that created an electrical blackout in the entire province of Quebec, and caused worries that the Soviet Union had launched an attack.

Come to find out, the sun is even more powerful than a nuclear adversary, which is why Manweiler and Armstrong argue the U.S. ought to spend more effort to understand it.

“One of these huge explosions on the sun amounts to about 1,000 of the largest H-bombs ever exploded by humans,” Armstrong said. “Granted, they are 100 million miles away, thank heavens, but when they are the right size and pointed the right way, they can turn the lights out.”

While space missions — both new and old — seem to be on the cusp of answering important questions, there is one very terrestrial question many space scientists worry about these days: Will the lights go out on space exploration?

Manweiler said he is concerned about the general attitude regarding the importance of space exploration.

“This country has to do something about trillions of dollars of national debt, but hopefully there won’t be a decision that science isn’t important,” Manweiler said. “Unfortunately, I can easily see someone saying that for the next 10 years, science isn’t important while we deal with this debt. I don’t think that will happen.

“It would be the worst case for our company. It wouldn’t be too good of a case for the country either.”

But maybe an attitude adjustment on space exploration is in the near future. As the Curiosity rover sends more images from Mars, public interest in space grows. Armstrong is predicting the public will get excited when the Webb space telescope launches, tentatively set for 2018. It will have the capability to detect the faraway presence of life-essential gases such as oxygen, methane and ammonia.

“That will be the next biggie,” Armstrong said. “To establish that there are stars in our galaxy that have biology going on.”

And, of course, there is Voyager as it enters a new realm. Maybe a ship with Tom Armstrong’s signature will find something that changes it all.

What will it be?