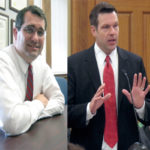 The State Objections Board, comprised of, from left, Lt. Gov. Jeff Colyer, Attorney General Derek Schmidt and Secretary of State Kris Kobach, is weighing a citizen's complaint that President Obama should not be on the Kansas ballot. The citizen, a Manhattan resident, believes the president was born in Kenya.

The all-Republican State Objections Board heard arguments Thursday on a claim from a Manhattan, Kan., resident that Obama is not eligible to be president because his father was from Kenya. The resident, Joe Montgomery, also questions whether Obama has a valid birth certificate.

The notion that Obama was born anywhere other than in Hawaii has long been discredited, and the White House released his long-form birth certificate last year. Hawaii officials also have repeatedly confirmed his citizenship. His mother was a Kansas native.

The state board is led by Secretary of State Kris Kobach, an ardent voter ID proponent who during his successful 2010 campaign suggested Obama should produce his long-form birth certificate to quell doubts about his status. The board’s other members are Attorney General Derek Schmidt and Lt. Gov. Jeff Colyer.

The board, which would have the final say on the ballot absent a court challenge, plans to meet again Monday and may rule then. Time to make changes is running out, however, as ballots to overseas military personnel must be mailed before the end of September.

Kobach said the delay shouldn’t be interpreted as the board giving credence to claims that Obama isn’t eligible, but as a signal it wants to build a more complete record. He noted that the board doesn’t have any document certifying the authenticity of the copy of Obama’s birth certificate that is available online.

“We have to take our responsibilities seriously,” he said. “Taking it seriously means that we make a decision with all of the evidence that can be obtained before we decide it.”

“This is absurd and insulting,” she said. “This issue has been resolved — there is no issue.”

Montgomery, 51, said Thursday that he has been researching issues surrounding Obama’s eligibility for the past four years. The same arguments Montgomery made have circulated widely on the Internet and among so-called birthers, who doubt Obama’s citizenship.

“I’m here to uphold the rule of law and the Constitution of the United States,” Montgomery said after his objection was considered. “Somebody has to do it.”

Montgomery also argued that to be eligible for president, both of Obama’s parents had to be U.S. citizens when he was born, another long-circulating claim that includes citations of U.S. Supreme Court decisions, some more than a century old.

Schmidt and Kobach, a former University of Missouri-Kansas City law professor, disagreed. Kobach said Montgomery was “trying to read too much in these very old decisions.”

But the board said Thursday it wants certified documents from Hawaii. Kobach plans to have his staff contact officials in Arizona and Mississippi, which also have looked into such issues. Hawaii sent Arizona official verification of Obama’s birth records.

In 2010, after Kobach made his comments about Obama’s birth certificate in answering questions at a campaign event, an aide attempted to clarify Kobach’s stance and said he didn’t subscribe to birther theories. On Thursday, asked by reporters whether he personally doubts Obama’s citizenship, Kobach said he wants to wait on making a statement until “we have the full factual record in front of us.”

Kobach said it will be difficult for Montgomery to prevail, particularly because Kansas has a high legal standard for removing a candidate from the ballot.

But he said, “I don’t think it’s a frivolous objection.”

Neither the Democratic Party nor the Obama campaign had a representative at the meeting, but Kip Wainscott, an attorney for the campaign, sent the board a letter saying Montgomery’s claims were “without merit.”

After the meeting, an Obama campaign spokesman didn’t respond to an email seeking comment.

Wagnon, who was attending a nonpolitical meeting in New York, said, “I am disappointed that they don’t have better things to do than to encourage this birther crowd.”