KU pulls out of deal for sports complex at NW corner of Sixth and SLT, proposes plans for larger complex on new site 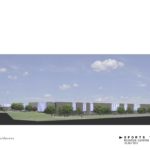 This architect rendering of the proposed recreation center in northwest Lawrence shows the 172,000-square-foot fieldhouse. The drawing was provided by Paul Werner Architects and GouldEvans.

KU officials also have asked the city to bring its proposed $24 million recreation center and youth fieldhouse to the site, and Lawrence Mayor Bob Schumm said Tuesday night the city is interested in doing so.

“We have stated all along that we want to continue a relationship with KU, and that is still true today,” Schumm said. “This new site has a lot more acreage involved, and we think we potentially could get more uses out of it for the city.”

The new site is more than 87 acres of ground north of the proposed Mercato retail development at the northeast corner of Sixth Street and the South Lawrence Trafficway. The Journal-World previously reported city officials were exploring a possible purchase of the property, which is just north of where George Williams Way currently dead-ends north of Sixth Street. But in a letter to city officials, KU Athletic Director Sheahon Zenger said Kansas University Endowment Association has agreed to purchase the property.

Zenger said in the letter that KU was motivated to move to the new site because it could accommodate not only a soccer field and track and field stadium, which were proposed at the previous location, but also a new softball complex. Zenger said the new site will allow the university to address all three issues, and make progress on satisfying Title IX requirements for the women’s soccer and softball programs.

Other details from the proposal, which was announced after the City Commission met for 45 minutes in executive session Tuesday night, include:

• The future of a proposed partnership with Lawrence businessman Thomas Fritzel to build the city recreation center and lease it back to the city on a 20-year lease-purchase agreement is uncertain. Schumm said the city was still trying to determine how the new location would affect that arrangement.

• The idea of adding more than 100 acres of new retail development on the northwest corner of the intersection is now clearly in question. Schumm said the city will have a hearing on the proposed retail zoning at its meeting next week. But Schumm said he was no longer interested in approving the retail zoning since it appears unlikely that a sports complex will be located on the site. A group led by Lawrence businessman Duane Schwada had proposed building retail development adjacent to the new sports complex. Schwada, however, does own retail-zoned land that is adjacent to the newly proposed site.

• Schumm said that with the additional acreage at the new site, the city and KU will explore the possibility of adding lighted tennis courts, a cross country jogging path and other amenities that could be used by Lawrence residents.

• Cost estimates to develop the new site are still being formulated, but the city believes infrastructure costs likely will be less because the site is on the east side of the South Lawrence Trafficway. The previous site required costly extension of water and sewer service across the SLT.

• Zenger said the new plan — especially with KU Endowment being the proposed owner of the property — would allow the university to take more of a leadership role in the development of the complex.

“Since the inception of the ‘West of the Bypass’ discussions, it has been noted publicly and privately that Kansas Athletics was not significantly invested in the project,” Zenger wrote. “This notion was not lost on us.”

City commissioners are scheduled to discuss the new proposal in more detail at its meeting next Tuesday evening.