Story gives kids incentive to sleep in their own beds 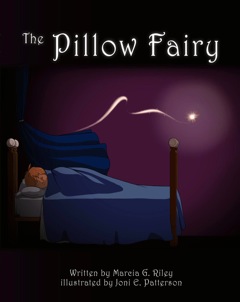 “The Pillow Fairy” by Marcia Riley (self published at CreateSpace, 2012)

The Pillow Fairy is available at the following locations:

Move over Tooth Fairy, there’s a new kid in town!

Local resident, educator and now published author Marcia Riley is sharing one of her parenting secrets in her new book, “The Pillow Fairy” (self published at CreateSpace, 2012), the story of how she got her two sons to go to sleep in their very own beds.

“Justin (then 2) was having a meltdown, and I just pulled him into my lap and I thought that instead of getting upset, we’d do something fun,” says Riley.

Little did she know that moment would give birth to a family tradition and become the inspiration for her book.

“The Pillow Fairy was an epiphany,” she says. “It was just something that came to me in a creative moment.”

Riley told her son that if he slept in his own bed, the Pillow Fairy would come and leave a surprise under his pillow — stickers, cars, plastic dinosaurs, “anything he might want,” she says.

The Pillow Fairy worked like a charm — so well, in fact, that Riley thought other families could benefit from her creation. She wrote up the story and sent it to a publisher in New York.

“That was about 20 years ago, and the children’s publishers were more interested in animal stories back then,” she says.

Years went by, and a lot changed in the Riley household as well as in the publishing industry. Riley continued teaching at her rural elementary school in the Perry-Lecompton School District, Justin and Matt grew to adulthood and self-publishing became much more commonplace, which was the route to publication that Riley ultimately decided to pursue.

“You’ve done all this hard work,” she says, “it’s like a child and you want it to be right.”

She sent her manuscript to one illustrator, who returned with images that were not at all what she envisioned — “They were really scary!” she says. More importantly, they did not resemble her two children: Justin, now 28, and Matt, who is 25.

Riley then discovered that one of her former students had a daughter who was a gifted illustrator. And even though she had never had a high school or college course in art, 21-year-old Joni Patterson was just who Riley needed to help turn her turn her decades-long dream into reality.

“I was a little intimidated because I wanted to make sure I got what she wanted,” says Patterson, “but she (Riley) convinced me that I was up to it.”

Turns out, Riley was right, and she was delighted with the images Patterson returned to her.

Both Riley and Patterson could not be more pleased with the positive feedback “The Pillow Fairy” is receiving.

“I think it’s a story everyone can relate to,” says Riley, who says that most of her best memories involve her family.

Riley adds that she didn’t write the book to be an author, “I wrote it to share a memory and maybe help some others who were struggling through this trying issue.”