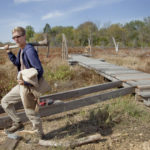 Jason Hering, of Lawrence, with the Wetlands Preservation Organization and KU Eco Justice, works Tuesday morning at the Haskell Eco Walk area, just north of 31st Street and across from the Baker Wetlands. Hering and various organizations and volunteers are creating ramps, walkways and trails through the wetlands areas on the north side of 31st Street. The Wetlands Preservation Organization was an unsuccessful plaintiff in the lawsuit to stop the South Lawrence Trafficway.

Click here to see a timeline of events about the South Lawrence Trafficway.

The more than 20-year legal battle to stop the South Lawrence Trafficway from running through the Baker Wetlands is now officially over.

The deadline for opponents of the roadway to seek a Supreme Court review of a federal appellate court decision clearing the way for the road came and went on Tuesday. Representatives for plaintiffs in the case confirmed they did not file the paperwork seeking a Supreme Court review of the decision, which means the appellate court victory for the roadway is final.

“We weren’t able to do anything with the Supreme Court,” said Cleta La Brie, president of the Wetlands Preservation Organization, which was a plaintiff in the suit. “Once again, it will be a story of land being stolen from the Indians.”

While the legal battle may be done, all signs point to continued opposition efforts to stop the bypass project from traveling through the Baker Wetlands, which are considered a sacred area to many students and staff at adjacent Haskell Indian Nations University.

But trafficway opponents acknowledged that with the project’s defining lawsuit now closed, the effort to stop the road from being built will become more difficult.

“I think there is kind of a resignation, but there is also an enduring hope through public consciousness and public education that there could be some rethinking about this idea to pave over wetlands,” said Bob Eye, an attorney who represented the plaintiffs. “But it will have to come at the elected level. I don’t think the decision-makers at KDOT or Federal Highway suddenly will see the value in saving wetlands.”

It also will have to come relatively quickly. Kansas Department of Transportation officials have said construction on the final leg of the road — which will connect Interstate 70 west of Lawrence with Kansas Highway 10 east of Lawrence — could begin in the fall of 2013. The road could be open by the fall of 2016.

A Supreme Court review of the case was not widely expected by attorneys. The 10th Circuit Court of Appeals in July unanimously upheld a lower court’s ruling that said all the necessary permits for the wetlands portion of the project had been properly obtained. Even if plaintiffs had filed for a review from the Supreme Court, the court rejects most requests for appeal.

La Brie said her group was advised it would cost “several thousand” dollars just to file the appeal.

But La Brie said her group does believe the trafficway project may still face some funding problems that could prevent its construction.

The state has included funding for the approximately $190 million project in its comprehensive transportation program. But La Brie said wetland supporters will be watching to see if approved state tax cuts will erode the amount of money available to fund the highway project.

“Construction of the road seems like a real possibility now,” La Brie said. “But they thought it was a done deal 20 years ago too. With the way government is going in Kansas, they may not have the money to do it.”