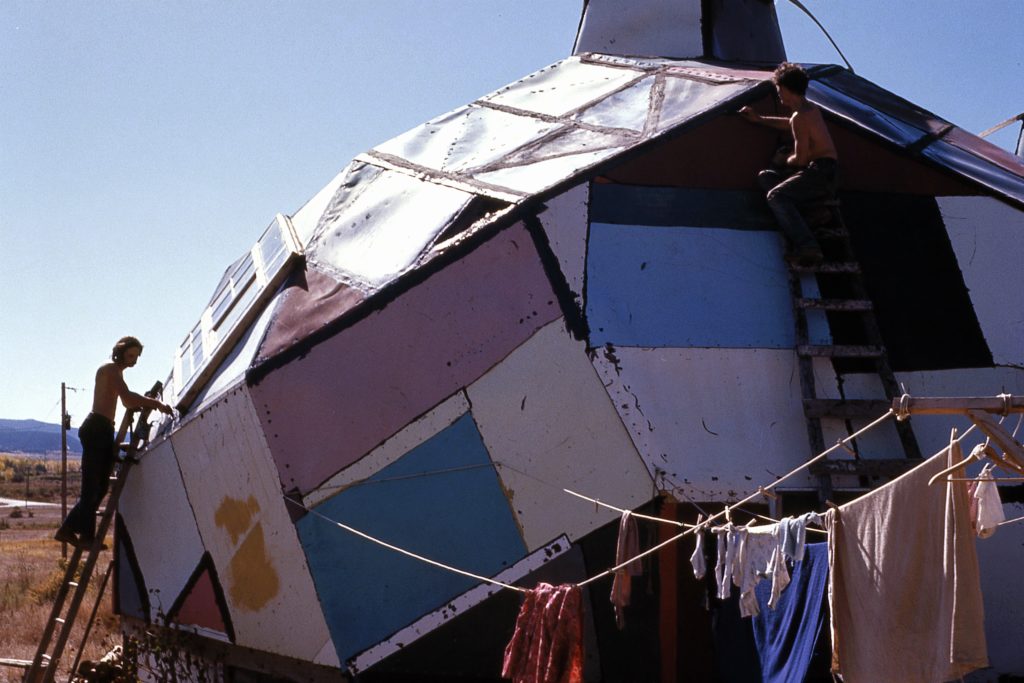 The Complex, pictured here in 1966, was the most ambitious structure at Drop City. It was based on the Zome, a stretched zonahedral form that consisted of three 30-foot connected domes. It was designed by Steve Baer, who used Drop City as a laboratory for experimental architecture and had come up with the idea of using car tops because a salvage yard let the Droppers chop them out and keep them for as little as 10 cents a piece. 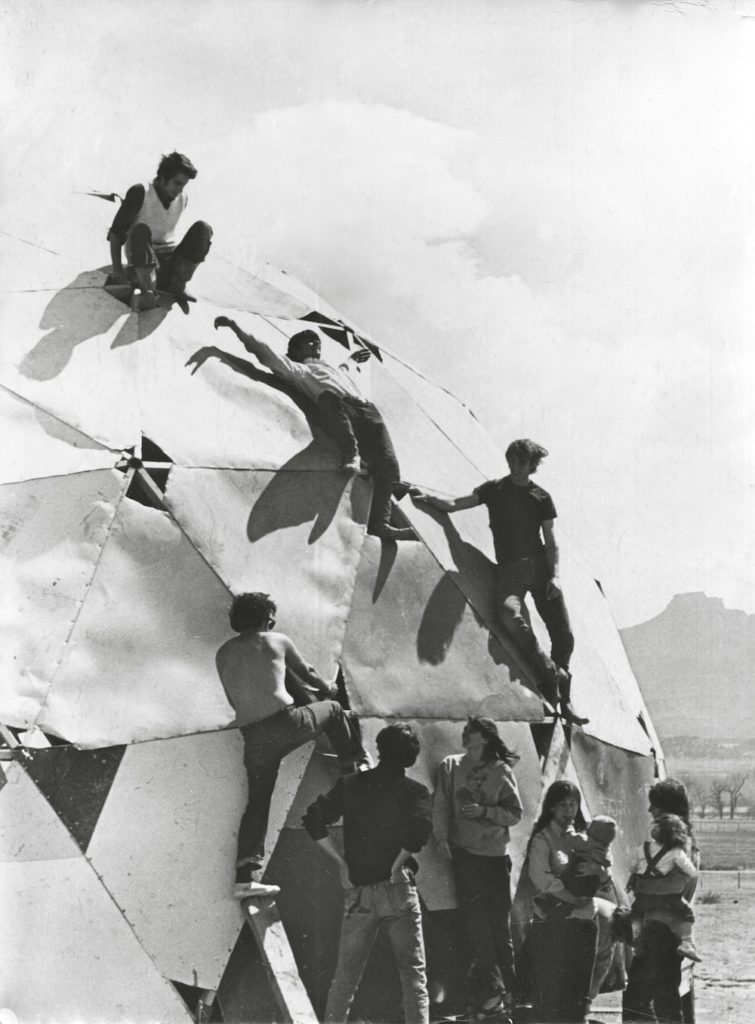 “Droppers” climb the Theater Dome at Drop City in 1967. The Theater Dome was used for performances, film and light shows. Its multi-colored panels were all cut from chopped car tops, and the colors were from the original paint on the cars.

Tickets are $6 at the Liberty Hall box office. All proceeds will benefit LINK.

There will be another screening of “Drop City” at 7 p.m. Friday in the Atkins Auditorium at the Nelson Atkins Museum of Art in Kansas City, Mo. The screening is free, but tickets are required. Order tickets at nelson-atkins.org.

In today’s world, it’s a concept that sounds like the basis for a reality show cooked up under the careful eye of Armani-wearing big wigs: Throw a bunch of artists together and see if they can live away from society, nourished solely by their creative juices.

But back in 1965, this scenario was more real than any “reality” show ever would be.

Back then, it was an actual place. Located in south-central Colorado, it wasn’t on the grid, wasn’t for profit and wasn’t like anything yet to be seen (though it would be heavily copied).

It was Drop City.

Referred to as the first hippie commune, this tight community of DIY geometric domes was grounded in a heady counter-culture combination of self-sufficiency, art and invention.

At 7 p.m. Thursday, a new documentary, called “Drop City,” will bring the story behind the experiment back to Lawrence, which helped shape the heart of the movement and the place.

Improbably, the first major experiment in communal living during the 1960s started with two Kansas University students and a stretch of concrete along Massachusetts Street.

Roommates and art students Gene Bernofsky and Clark Richert began tossing their work onto the sidewalk below their downtown loft back in 1962. These “droppings” were deliveries aimed at taking art out of galleries and museums and incorporating them into everyday life, by literally sending them flying out into the world.

By the time they’d graduated and Bernofsky had married his wife, Jo Ann, the couple and Richert had an even more developed sense of how to make art and real life collide. In 1965, the Bernofskys purchased land outside Trinidad, Colo., and began inviting friends, including Bernofsky’s old roommate, to live there and make art.

Bernofsky, now 72, says it was the group’s way of coping with what was going on in the world at that time — namely war.

“We so wanted to have creative, happy lives, despite the overwhelming brutality and ugliness of the Vietnam War. Don’t forget the draft was on and all of us were sickened and frightened to become meaningless fodder for a war of rich man’s colonialism,” says Bernofsky, who now lives in Missoula, Mont. “We did not want to waste our lives on such a deep society sickness. I hold on to images of our happy, active, creative youth. We were successful in overcoming our society’s repression and monstrous threats to the idealistic energy of young life.”

To cope, they built a community out of junk, creating domes out of car roofs, bottle caps and other found objects. Artists, writers and inventors came and went, with creativity and an urge to leave mainstream society as the thread connecting each of the residents.

The “experiment” lasted about eight years, but in the decades since, it has been storied, studied and copied. KU religious studies professor Tim Miller has written academic papers featuring the communal living prototype and says that, in his opinion, not only was it the first but it was also completely driven in its idealism.

“What was unique about Drop City was its priority,” Miller says. “I consider it the first hippie commune — the first to combine such things as art, simple and cheap living, idiosyncratic architecture and a disdain for work and for mainstream culture. The architecture was like nothing that had gone before and started a whole era of hippie dome-building.”

During the decades since, Drop City has called to those looking to tell its story. Tom McCourt wasn’t the first or the last to dream of telling the commune’s tale when he learned about Drop City in 1984 while working for Kansas Audio-Reader.

At first, he thought he’d write a book. He researched and kept the idea alive before moving to east to teach at Fordham University in New York.

“Drop City is the best example of the possibilities and perils of counterculture in the U.S. that I’ve ever encountered,” McCourt says. “It’s a great American story of unfettered individualism and seemingly limitless possibilities. There were no leaders and no ideology other than sharing and living life as art.”

It was only when McCourt pitched the story to film professor Joan Grossman that the idea of a full documentary fell into place.

“Over the years, many, many media people have tried to speak with me about Drop City,” Bernofsky says. “Joan Grossman and Tom McCourt are the first, with the single exception of (KU professor) Tim Miller, I felt were sincere about getting to the core of Drop City.”

Grossman spent two years teaching film in Kansas City so that she could work on the film while being near Lawrence. She teamed up with Miller there, and through him met many longtime residents whose ideals developed in the same petri dish that grew Drop City. She says she thinks this group has forever put its stamp on Lawrence.

“Through Tim, I met a lot of people who came of age in the 1960s, so I know Lawrence has a vibrant population of old-guard hipsters. I’d like to think their values have infused the air in Lawrence.”

That said, she says her film isn’t meant to be a nostalgia piece for the 1960s. Rather, she says the finished product is almost a rearview mirror for today’s society and issues.

“Tom and I were determined to convey the inventiveness, fearlessness and humor of a story that speaks directly to issues today,” Grossman says.

She hopes that these parallels will allow the documentary to resonate with its audience, whether the viewers lived during the time or can only imagine it through their parents’ Kodachrome.

“I think viewers will have all kinds of responses, but I would hope that they recognize the ingenuity that built Drop City,” Grossman says. “The counterculture is often reduced to clichés about sex and drugs, but Drop City, despite its shortfalls, is a quintessential American story about building a new world on an open frontier. We all know there’s a lot of mythology in these kinds of American ideals, but the droppers really did it. They didn’t just imagine a place they could live — they built it”

Bernofsky has seen the film, and he doesn’t mince words when describing its depiction of a time and place that shaped his life.

“To be blunt, the film is a masterpiece.”