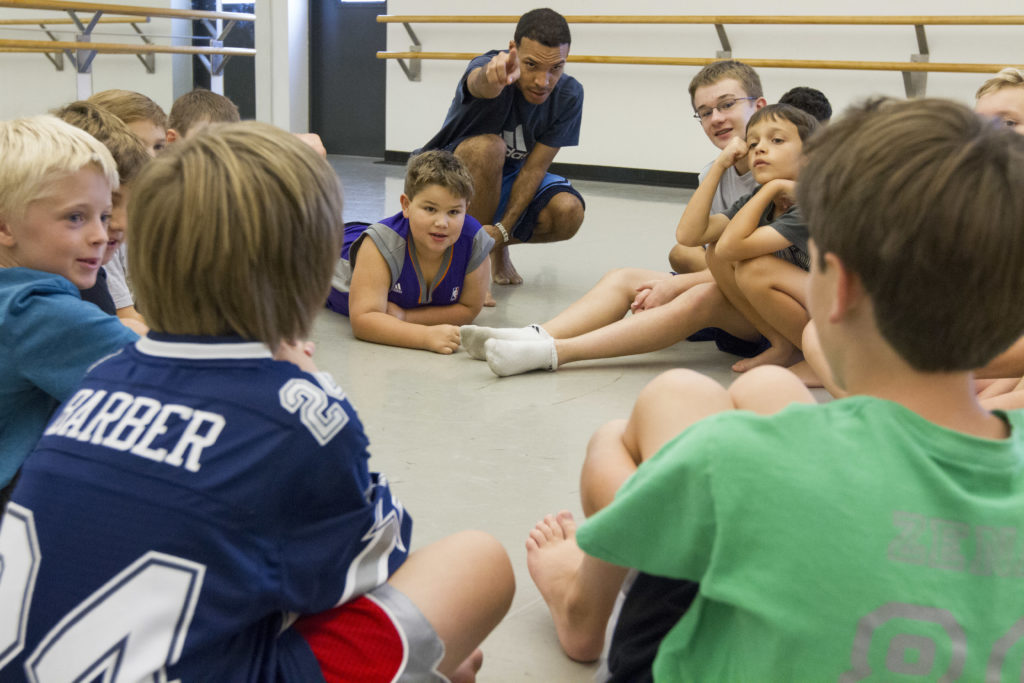 Before the start of every Athletic Movement Training for Boys and Young men class, instructor Matt Rodriguez, center, gathers his students around to get to know them better. 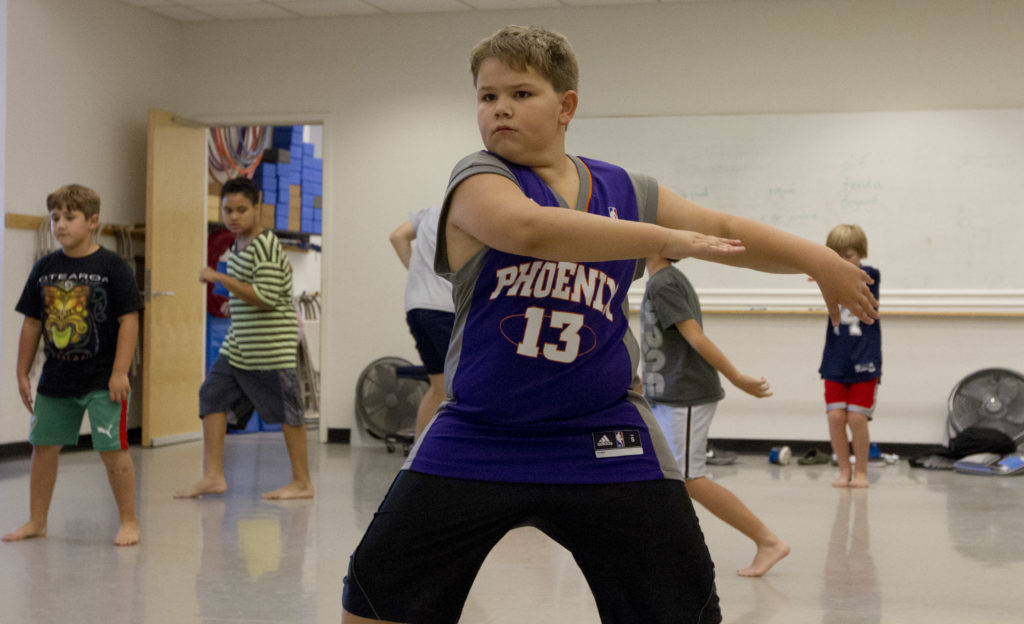 Ten-year-old Bowen Boyack, Lawrence, watches himself in a mirror as he practices his dance routine Sept. 14 in the Athletic Movement Training for Boys and Young Men class at Lawrence Arts Center, 940 N.H. 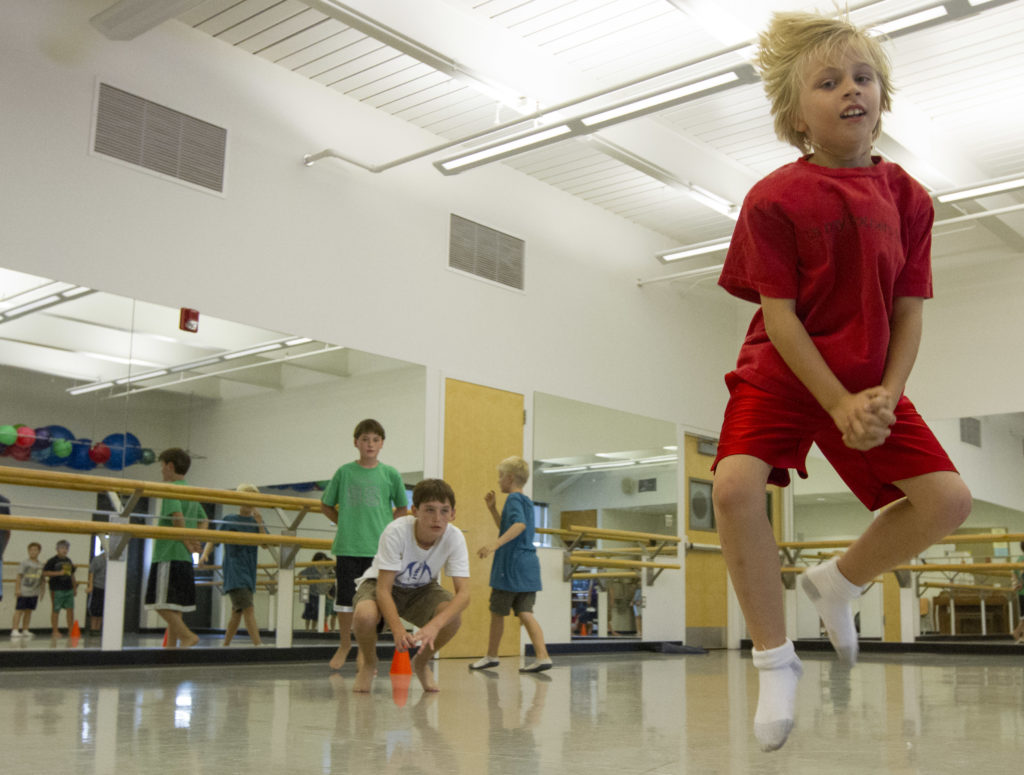 Eight-year-old Christopher Howard, Lawrence, leaps across the floor during an Athletic Movement class Sept. 14 at the Lawrence Arts Center, 940 N.H. 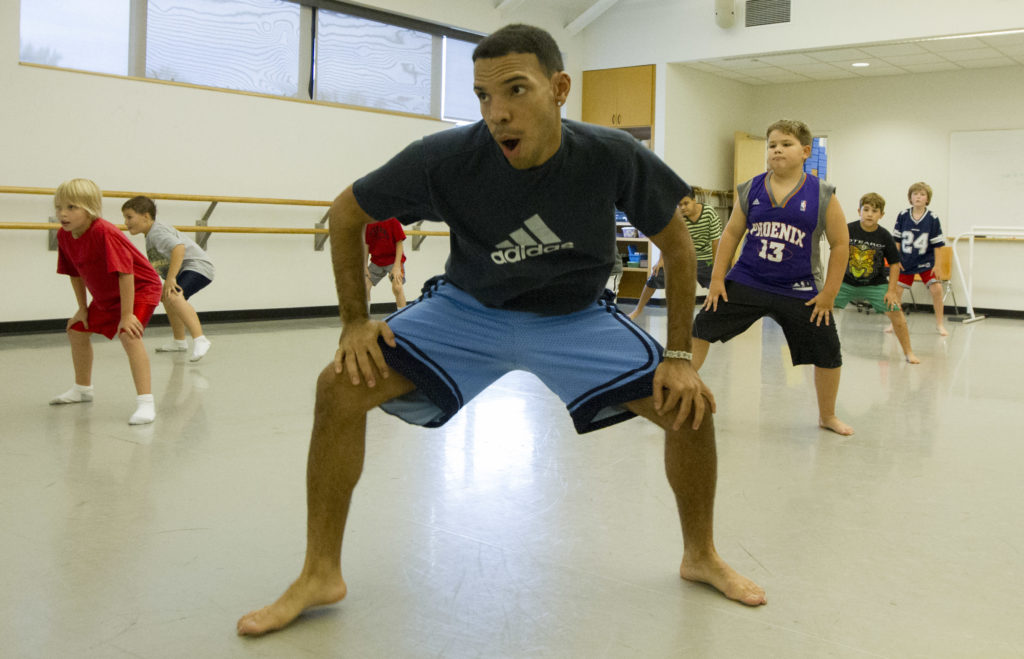 Instructor Matt Rodriguez, Lawrence, goes through a dance routine with his students in his Athletic Movement for Boys and Young Men class Friday, Sept. 14, 2012, at the Lawrence Arts Center, 940 N.H.

This is no classical ballet class, and that’s by design.

Acceptable attire includes sports jerseys and basketball shorts. It’s OK to squirrel around between exercises. And if you feel like screaming hi-ya! in the middle of a routine, no one’s going to stop you.

Ask the 8-year-old in the “It’s my brother’s fault” T-shirt, who’ll tell you this is fun.

“I really — a lot — like dancing,” Christopher Howard said, grinning on his way out of a recent class at the Lawrence Arts Center, 940 N.H.

Ballet and other dance can be great cross-training for athletes, but tights, rigidity and the fear of looking silly — especially in front of girls — can be big turnoffs for typical boys. The arts center’s Athletic Movement Training for Boys and Young Men class, open to third-graders through seniors in high school, proves dance instruction doesn’t have to fit the traditional mold for participants to reap the physical and social benefits.

Boys are generally naturally athletic, said Ashley Boyack, who teaches traditional dance at the arts center and has two sons in the Athletic Movement class: “But some boys may need a little bit of a push,” she said.

Boyack is helping write the curriculum for the class, funded by Kansas University basketball coach Bill Self’s Assists Foundation. It connects dance styles such as popping and locking to sports movements such as the type of ducking and weaving you might do with a ball, bat or racket in your hand. Mentally, Boyack added, learning choreography sequences is a lot like learning athletic drills.

“We have some young kids that need to work on being quicker and having better balance, and just coordination,” Wedd said. “Those are all skills that dance stresses.”

Several years ago, Wedd recalled convincing a couple of big linemen with less-than-stellar agility to try ballet, in hopes that “doing something with their feet would only help.” They may not have become superstars, he said, but they did improve.

Putting athletes in positions where they have to adapt is good for them, Wedd said, and sticking with something they may not be comfortable doing takes discipline. Dance can improve social skills, too.

“As a high school coach, you’re worried about all aspects,” he said.

Recently at the arts center, Christopher and about 15 classmates powered — not necessarily with ease — through an hour of stretches, push ups, frog jumps, ballet jumps and MTV backup-dancer style choreography with plenty of energy left for free-styling at the end.

Christopher has played some soccer and done some wrestling but has always loved dancing around, according to his father, Michael Howard. The moves in some more traditional classes seemed too advanced, Howard said, but “we found this, and he loved it.”

Class instructor Matt Rodriguez, who has a degree in dance from KU, said incorporating all dance styles makes his class unique.

With his students presumably out there kicking, throwing, batting and running, he doesn’t want them to miss out on the benefits of pointed toes from ballet, body isolation from jazz or quick direction changes from hip-hop. Besides athleticism, being forced to move your body in new ways can help confidence.

“They’re getting stuff thrown at them that they wouldn’t get anywhere else,” Rodriguez said.

Rodriguez played soccer and tennis in high school, football in middle school and T-ball and baseball as a child. He also did karate. He’s pretty sure if he’d been taking dance back then, he would have been a better athlete.

In middle school, he loved watching Michael Jackson, Britney Spears and Justin Timberlake videos and was usually the guy in the center of the circle at dances. In high school, a girl cajoled him into trying out for the dance team. Rodriguez said his mother “cursed up a storm,” sure they would make him wear a skirt (they didn’t, but he did have to pull on an Under Armour shirt to cover his midriff on one particularly “embarrassing” outfit).

“She was so afraid of what everyone was going to say to me,” he said. “I did it anyway and loved it.”

As a result, various iterations of the running man, the worm, cartwheels and all kinds of unclassified gyrations come out in force.

The take-home point of the class mantra, which Rodriguez has the group repeat at each session, is: “I came to dance class to have a great time. I will never, ever point or make fun of anybody because I know they’re having fun, too. I will always dance.”