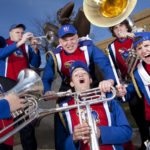 Kansas University band members, clockwise from left, Winston Heilman, Jeff Jasperson, Colin Lohrenz, Will Marsh, Chris Carter and Cody Janousek have been playing in bands together for 10 years, at West Junior High School, Free State High School and then at KU. The six played their final football game together on Saturday during the Jayhawks’ game against Iowa State.

Winston Heilman doesn’t know what might have happened if, when he showed up to his first day of practice with the Marching Jayhawks in August 2009, he’d looked around at the 300 people surrounding him and didn’t see anyone he recognized.

But that’s not what happened. Instead, he could look around and see five other faces who’ve been there since seventh grade: Chris Carter, Cody Janousek, Jeff Jasperson, Colin Lohrenz and Will Marsh.

“Starting out that first day, it was nice to have some familiar faces,” Heilman said.

At this point, “familiar” is perhaps an understatement. Those six students, now all KU seniors from Lawrence, have played together in marching bands now for 10 years.

They lined up alongside each other for the first time as seventh-graders at what was then West Junior High School in the fall of 2003, when Bill Self was preparing for his first season as KU’s men’s basketball coach. They were 12 or 13 years old.

They stuck with it at Free State High School. And when they got to KU, they joined the Marching Jayhawks. All along the way, they watched many, many others drop out.

Now 21 or 22, they marched in the same formation for the final time Saturday, at the final home football game of the season.

“I probably wouldn’t have stuck with KU band if I didn’t have these people around me,” Lohrenz said Friday afternoon as five of the six waited for the final rehearsal of their marching careers.

The others seconded that sentiment, but they also gave credit to the first person who directed them in a marching band together: Patrick Kelly, a former band director at West Junior High (now West Middle School) who is now associate principal at Free State High School.

They remembered that he forcefully urged them not to quit when they were still learning how to make their instruments work.

“I think he’s what kept us going all this time,” Marsh said.

Each of the six plays a different instrument: Heilman the baritone, Janousek the mellophone (the marching equivalent of the French horn), Jasperson the trumpet, Lohrenz the trombone, Marsh the tuba and Carter the snare in the drum line.

But that hasn’t kept them from remaining close, they said. Different combinations of the six were roommates during college. Carter and Lohrenz played in a punk-rock band together in junior high and high school.

They remember dashing back to their condos from an awards ceremony during their junior year of high school while on a trip to Winter Park, Colo., so they could catch the second half of the KU basketball team’s Final Four game against North Carolina. Having seen that KU had jumped to a big lead, they chanted “Let’s go, Jayhawks!” the whole way.

When the team went to the Final Four in New Orleans this year, five of the six were there with them as members of the basketball band.

Many of them grew up going to Jayhawk games with their family, Janousek says, and first picked up their instruments with dreams of taking the field at Memorial Stadium as part of the Marching Jayhawks one day.

Their time in the marching band has coincided with football disappointment. When they arrived, the team had played in bowl games for two straight years; now they’re part of the first four-year class in about 10 years not to travel to a bowl game.

And though some of the games made it tough to stick around and play “Home on the Range” until the last spectator had left, they said their time as Marching Jayhawks was well worth it. They received free trips, free tickets and an identity on campus.

Each of the five there before rehearsal Friday agreed that their favorite halftime show was the one they performed during their freshman year at KU: the “Saturday morning show,” which included theme songs from cartoons and video games, including “Looney Tunes,” “Scooby-Doo” and the Super Mario games.

Each of the six now has a leadership spot in his section of the band. Kelly, their director back in junior high, said that was characteristic of the committed kids he remembered.

“If that’s what our future looks like, that sounds pretty good to me,” Kelly said.

Two of the six are planning for careers in music: Jasperson is a vocal performance major, and Lohrenz is studying music education, hoping to follow in Kelly’s footsteps as a band director. Four of them plan to be teachers of one kind or another, and they said Kelly had an influence in that choice, as well.

Kelly said he pushed students hard to keep going as they learned to play their instruments because at that point it’s tough for them to imagine the friendships, experiences and travels that a spot in the marching band can bring.

“That’s kind of a dream come true for that many kids to still be playing all together,” Kelly said.

Carter and Marsh aren’t planning to graduate until next school year. But this will be their last year marching, they said.

“This is our class,” Carter said. “We can’t come back and not be with these guys.”

But Marsh said he plans to play with the KU Alumni Band that performs annually at homecoming, and he hopes the others will join him. Janousek said he hoped that in 40 years’ time, the sextet can celebrate 50 years of playing alongside one another.