A bumper crop of butterflies

‘Population outbreak’ a sight to behold 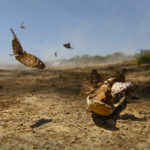 A Hackberry Emperor butterfly swoops in to join others on a rotten piece of cantaloupe left near the entryway of the Fitch Natural History Reservation north of Lawrence on May 22. Some experts believe the mild winter was cause for a population outbreak of this particular butterfly.

Go anywhere near the Kansas University Fitch Natural History Reservation north of Lawrence, and you’re in for a treat. If you make it within the next week, experts say, you’ll be able to see firsthand tens of thousands of butterflies, the result of a “population outbreak” that resulted from a wide variety of factors, including the very mild winter.

Perhaps it’s better put that the butterflies themselves are in for a treat: you. That’s because it’s theorized that the thousands of male Hackberry Emperor butterflies need to consume salt to complete their sexual development. They can lap up salts from mud puddles and other sources, Chip Taylor, director of Monarch Watch, said, but people’s skin makes a great source, too. This makes for swarms of very friendly butterflies. But the “amazing” numbers of butterflies aren’t just an impressive sight. They’re having a huge impact on the local ecology.

The Hackberry butterflies, named after the hackberry trees that make up the wooded area of the Fitch reserve, are a few inches across and have gray and brown markings. The caterpillars that eventually turn into the Hackberries have boom years occasionally, Taylor said, but this year is “particularly remarkable” with an explosion in population over a fairly limited geographical area, just about two miles square.

The Hackberry Emperor caterpillars were so numerous in the Fitch this year that entire hackberry trees were stripped of their leaves early, a rare feat. Mark Robbins, the ornithology collection manager at KU, said the diminished tree cover will lead to greater amounts of vegetation on the woodland floor. That’ll be aided by the decay of the butterflies’ bodies.

The exact reason for this year’s population outbreak isn’t known, but Robbins suspects that it’s cyclical, and that next year’s yield may be even bigger. In the meantime, researchers will keep an eye on how the unusual conditions may lead to changes in patterns of behavior in everything from plant species to migratory birds.

“Next year may be phenomenal,” he said. “It’s hard to say what factors lead to booms, but I hope next year we see huge numbers.”