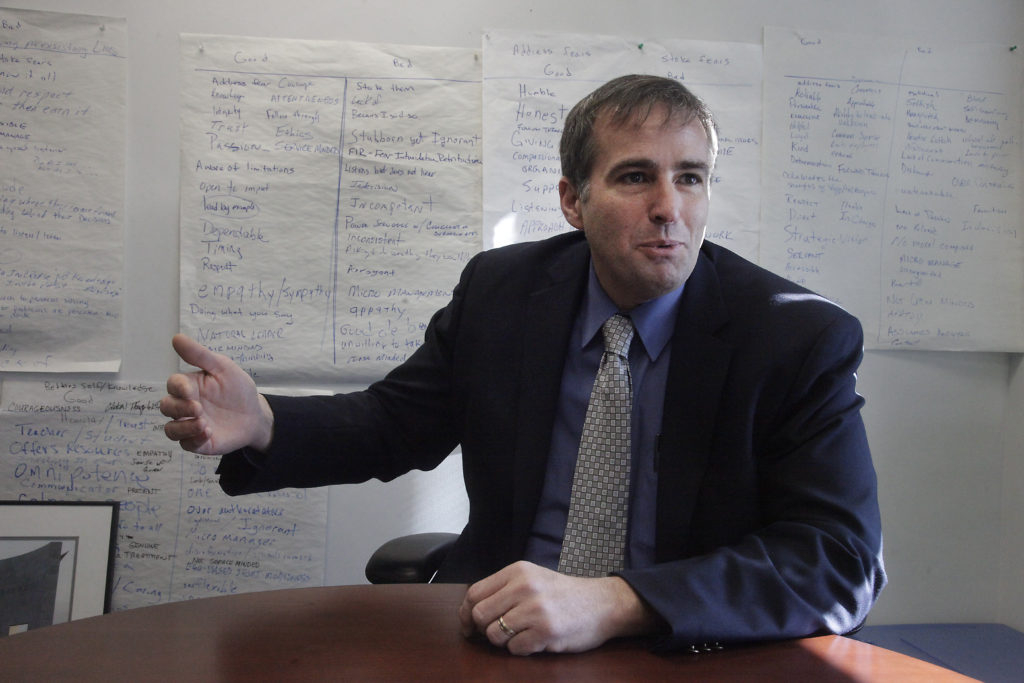 Tarik Khatib talks about his role as police chief and how he communicates with the public using advice from fellow officers and public officials Friday, March 25, 2011.

• An officer was arrested by another agency for a driving offense. The complaint was sustained.

• A citizen reported that an officer failed to take a report of a crime. The complaint was sustained.

• A citizen reported that an officer was unprofessional and did not properly enforce a court order. The complaint was not sustained.

• A citizen reported being arrested without cause and that the person’s children were unjustly taken into protective custody. The officers were exonerated.

• A citizen reported that an officer permitted a roommate to return to a residence after the roommate was released from jail for an incident that had occurred at the home. The officer was exonerated.

• A citizen reported being wrongfully arrested for trespassing. The officer was exonerated.

• An officer failed to properly document the facts of a case in a police report. The complaint was sustained.

• A citizen reported that his or her child was taken into protective custody by an officer without justification. The officer was exonerated.

• An employee failed to report damage to a work vehicle. The complaint was sustained.

For the past two years, the Lawrence Journal-World has requested the full reports for misconduct complaints against members of the Lawrence Police Department. The department has denied those requests, citing a personnel exemption in the Kansas open records law. However, police have furnished brief case summaries indicating which complaints were sustained.

The case summaries that police provided consisted of one or two sentences, and they did not include what disciplinary action was taken against officers. For example, the summary for the ticket-fixing incident that the FBI investigated — in which no criminal charges were filed — said simply:

“An anonymous complaint led to the investigation of officers for violation of the department’s gratuity and solicitation policy. The complaint was sustained.”

Those allegations involved the dismissal of a Kansas University athletic department official’s speeding tickets in exchange for KU basketball tickets. The city has not identified the two officers, but city officials have confirmed that Matt Sarna and Michael Monroe, both sergeants and longtime officers, no longer are employed with the department.

Khatib said his office would have proactively provided the public with information in the ticket-fixing case once the investigation was complete. However, information obtained by media outlets led the department to provide information sooner, he said.

Khatib did say there could be cases in which an officer was terminated for misconduct but which wouldn’t necessitate public notification.

The chief said he believes the current system is an effective way to inform the public about possible wrongdoing within the department, while not sacrificing the officers’ privacy.

Charles Davis, a journalism professor at the University of Missouri and author of two books on open records, disagrees.

“We have to take their word for it,” Davis said about a lack of details in such cases. “How does the public have any idea it wasn’t an entire whitewash?”

Davis also questions the use of the personnel exemption as a rationale for limiting information. In several states, media outlets have battled police agencies about similar exemptions, and courts have generally ruled on the side of transparency, Davis said.

Letting the public in on cases of police misconduct is “just part and parcel to be accountable to the public,” Davis said.