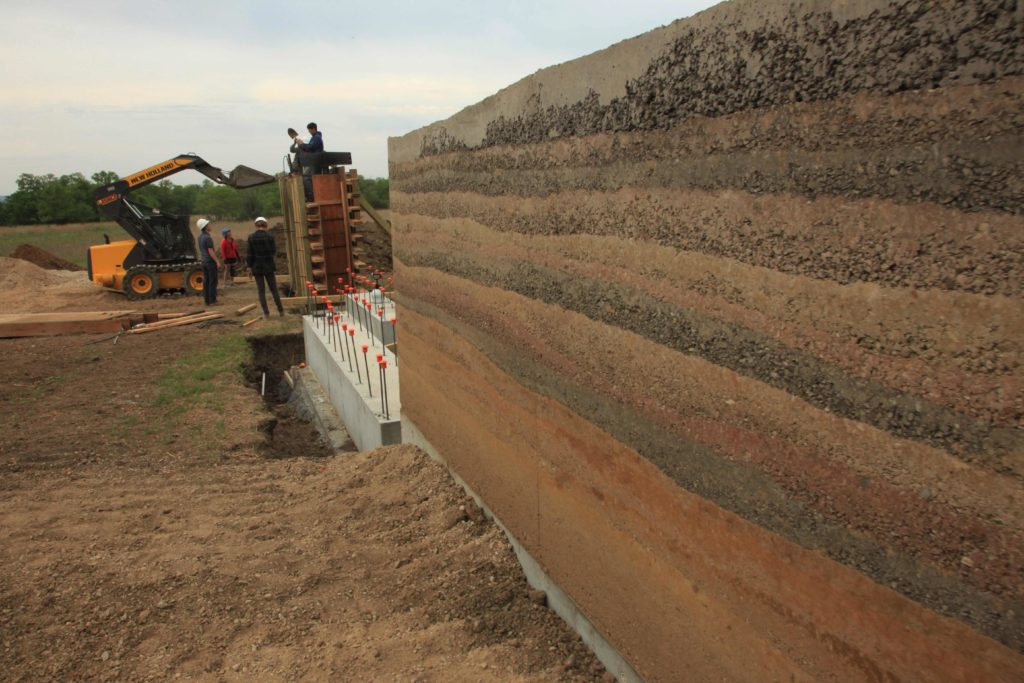 KU assistant professor Chad Kraus, along with eight students were hard at work on Friday, April 27, 2012 north of Lawrence at the KU Field Station building part of a 120-foot long wall as part of a trail head.

Lifelong educators and biology teachers Janet and Stan Roth have led students down nature trails as far away as Florida and Hawaii. So, it’s fitting that their names will be what visitors to the Kansas University Field Station will pass by as they enter the public trail system.

Since January, architecture students from Kansas University’s dirt works studio have been designing and building a trailhead structure in the Lawrence couple’s honor. Designed to echo the landscape, the trailhead structure will consist of a 120-foot-long rammed-earth wall, a shade canopy and benches.

The structure will be the gateway to the field station, which sits north of Lawrence and is overseen by the Kansas Biological Survey. The field station provides thousands of acres for ecological and biological research, but several miles worth of trails have been opened up to the public.

Assistant director at the field station Scott Campbell is among the students whom Stan Roth inspired to study biology and those who are involved in the project. He still remembers well the trip he took to Florida with Roth, who was a “consummate naturalist.”

“He knew the animals, he knew the ecology, he was like a textbook. And he could convey all that to young people,” Campbell said. “It really was very enriching. I’ve never forgotten it.”

“We have taken students on so many trails, I couldn’t even tell you how many,” Janet Roth said.

The trailhead structure is part of a larger effort to honor the Roths’ contribution to the community. The Kansas Biological Survey has established the Stan and Janet Roth Trail and Nature Education Fund. Along with providing financing to fund the development of a one-mile trail and trailhead structure, the fund will go on to support student field trips, environmental science education, instructional workshops, field research grants for promising high school students and education materials for the site.

“People like the Roths, in my view, are model citizens. They are the kind of people you like to know exist in your community,” Campbell said. “They are givers, and they don’t expect recognition or something in return.”

Late last week, students were working hard to complete the structure before the end of the school year. Standing on a wooden frame a good 10 feet above the ground, students shoveled dirt from a skid-steer loader and used pneumatic rammers to pound the dirt down into the frame to mold the earthen walls.

The class is made up of 10 students, each with a job that best suits their skills. Some have become project managers, public relations specialists and foremen.

With seven years of landscaping experience, Ben Peek had been put in charge of operating the skid-steer loader. While many of the students have built architecture models, this is the first life-sized project they have undertaken.

“When you build to scale, you really think out the problems and solutions,” Peek said. “It opens your eyes to what actually goes on in the real world.”

The trailhead structure is the third piece of work KU architecture students have built at the field station and is an example of how the field station staff is attempting to reach out to more than just ecologists and biologists.

“What we have been trying to do more recently, in the last decade or so, is to explore other opportunities for the university to become engaged out there,” Campbell said.

Chad Kraus, the instructor of the dirt works studio, proposed using rammed-earth walls because it represents a more sustainable way to build. Soil doesn’t require a lot of energy to transform it into a building material, nor does it have to travel hundreds or thousands of miles to the building site.

“If you look back in history, every society on earth at some point built out of dirt,” Kraus said and noted some of those structures have lasted for a millennium.

The Roths, who were “shocked” to have the trailhead named in their honor, liked the idea of using environmentally sustainable and local materials to build it.

Busy on site, mixing different combinations of soils, concretes and gravel, student Katie Caufield was interested in the project because of its focus on rammed-earth building.

“It has been a lot of fun and a huge learning curve,” Caufield said.

Caufield is in charge of making sure the different mixtures of dirt will be layered in the wall in a way that reflects the geology of the area.

The wall isn’t the only aspect of the structure to echo the surrounding environment. Along with providing shade and cover from the elements, a wooden canopy on a section of the wall mimics the woodlands that one of the trails leads to. The wood on the canopy, made from recycled poles from Westar Energy Company, will be treated using an ancient Japanese burning technique, which reflects the burning of the tallgrass prairie.

The Roths have been sold on the inspiration behind the design of the structure.

“We are looking forward to seeing it,” Janet Roth said.