Large number could eventually turn into ‘tornado of butterflies’ 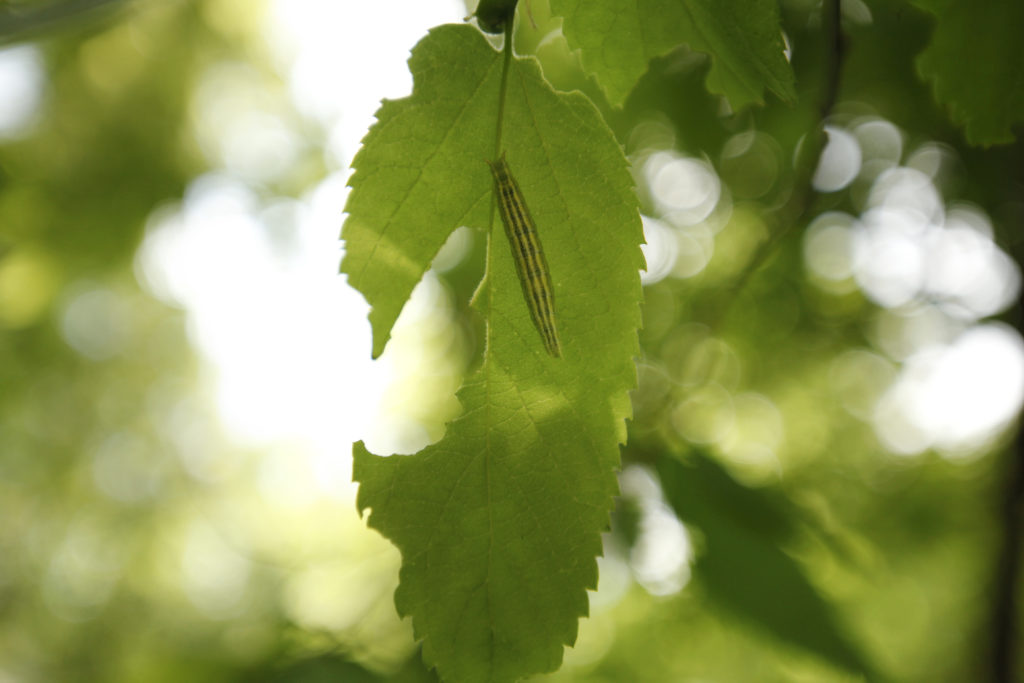 A caterpillar works to eat a leaf from a hackberry tree on Friday in the Fitch Natural History Reservation. 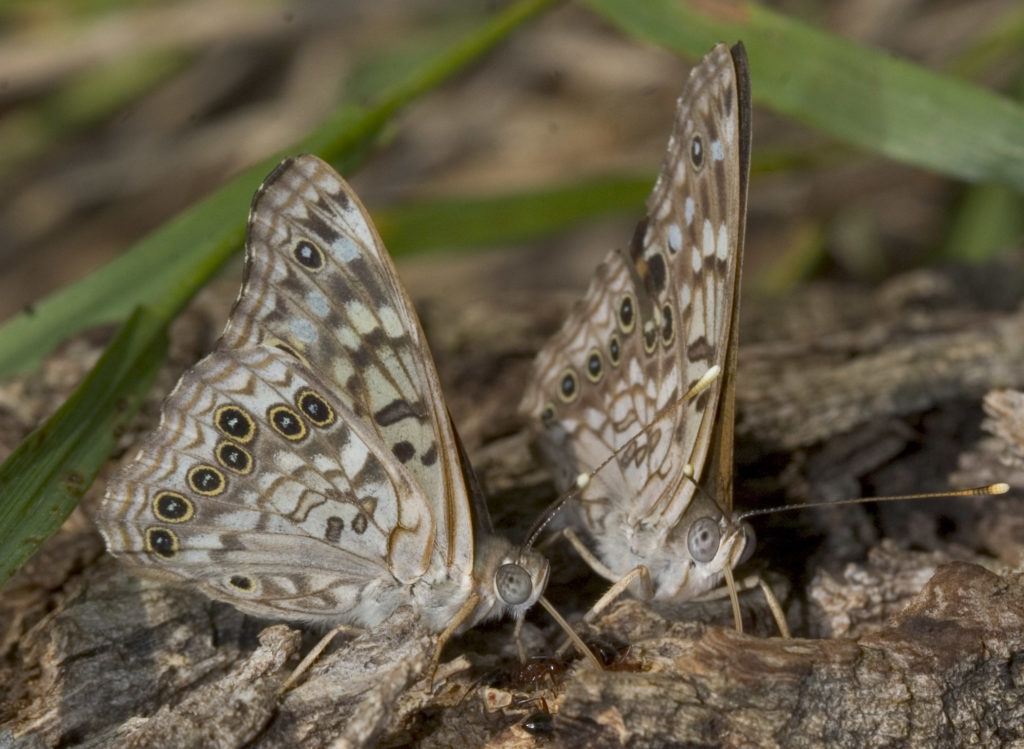 Hackberry Emperor butterflies, which will soon grace the KU Fitch Natural History Reservation by the thousands. The photo is from Dave Rintoul, the associate director of the biology division at Kansas Sate University. More than a decade ago, Rintoul saw a tornado of butterflies at a Fort Riley bird branding station.

At first, Mark Robbins thought he heard a gentle rain as he walked through the Kansas University Fitch Natural History Reservation.

Robbins, the ornithology collection manager at KU, was looking for birds in the predawn darkness of the woodlands, which sit several miles north of Lawrence.

As the sun rose, Robbins noticed the barren branches of the hackberries. While the rest of the trees in the woods looked as though it was mid-June, the hackberries had no leaves.

“I have never seen anything like this,” Robbins said.

The caterpillars that Robbins spotted munching on hackberries this week will soon turn into Hackberry Emperor butterflies, a midsized butterfly with subdued brown and gray coloring.

The arrival of caterpillars in late spring — even in such large numbers — isn’t rare. But Robbins, who has been walking the woodlands for close to two decades, has never seen so many of them so early.

While the sight and sound of thousands of caterpillars is amazing enough, Robbins predicts a “quiet bedlam” when they become butterflies.

“It is going to be wild, just insane in here,” Robbins said.

Dave Rintoul, associate director of Kansas State University’s biology division, can give a sense of the wildness to come.

More than a decade ago, Rintoul came across what he described as a tornado of butterflies. Rintoul spotted them at a Fort Riley bird-banding station along the Kansas River. The area was heavily covered in hackberries, a common Kansas woodlands tree.

“It felt like there were more butterflies than air. And that is what it is going to be like,” Rintoul said of the woods north of Lawrence. “In a couple of weeks, that is going to be quite a scene.”

What accounts for the massive population this spring is unknown. Robbins’ best guess is that the unusual warm winter led to more caterpillars surviving.

Bill Busby, an associate scientist with the Kansas Biological Survey, speculates that the high number of caterpillars are regional.

“If it’s out there, I suspect it is all around our area,” Busby said.

On a late Friday afternoon and about a mile into the public trails of the Fitch Natural History Reservation, Robbins walks into the heart of the caterpillar infestation. Among the sounds of bullfrog croaks and the flute-like whirl of the Swainson’s Thrush, the caterpillars’ droppings can be heard. And this time there are so many that it sounds more like a shower than a gentle rain. Every few seconds a caterpillar plummets to the ground like a shooting star.

The path of the caterpillar is easily marked. Throughout the woods, patches of leafless Hackberries stand, looking similar to the hot spots of barren vegetation that are left behind after a forest fire. Through the denuded trees sunlight pours through the woods. Robbins predicts the lack of leaves will lead to more undergrowth on the forest floor this summer.

The forest floor isn’t the only thing that has benefited from the caterpillars.

Right now is the peak migration for birds traveling north from Central and South America. And all those caterpillars are a bonanza for both local and transitory birds, Robbins said.

“Literally they are just sitting in the trees stuffing themselves,” Robbins said.

As for the fate of the hackberries, Rintoul said in the case of the Fort Riley caterpillars that the trees had leaves by July and were fine the next year. And, he said, he only saw the butterflies that one time. But it was a sight he hasn’t forgotten.

“When we drove off, there were clouds of butterflies coming out of the windows of cars,” Rintoul said. “I bet you I still have Hackberry butterflies in there.”