Kanbulance is the life of the party

Owners of the Kanbulance, from left, Paul Wallen, Kitcha Paranjothi, Adrienne Paranjothi, Lisa Leroux-Smith, Wes Smith, Amy Clark and David Clark, all of Lawrence, stand next to their pride and joy: an ambulance that has been converted into the ultimate Jayhawk tailgating machine.

For three years, the crimson and blue decorated Kanbulance has been the hit at Kansas University football tailgates. 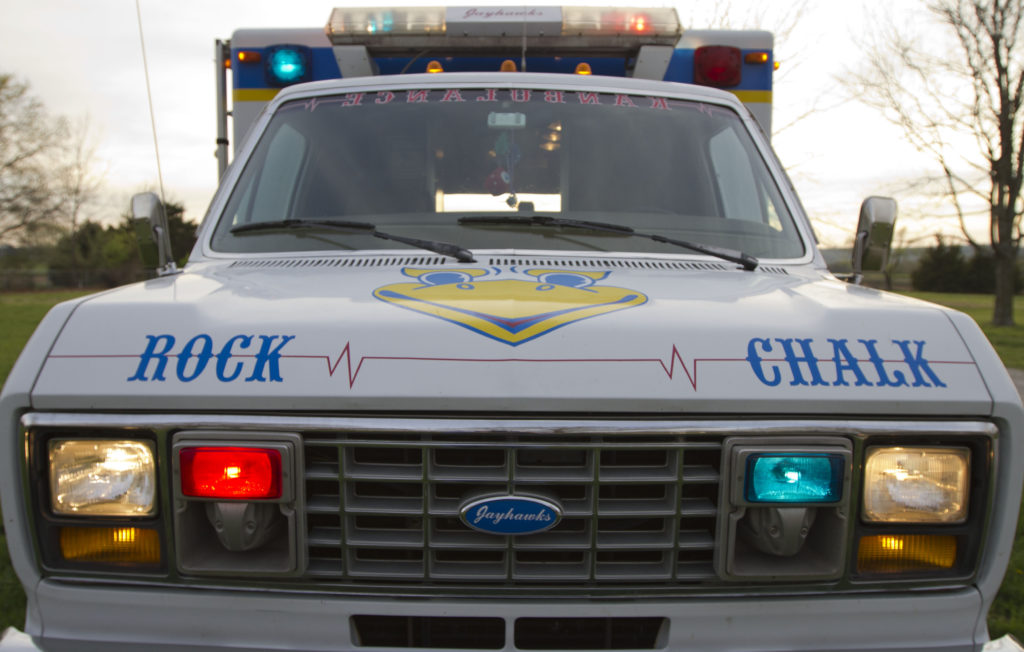 The emergency vehicle turned Jayhawk mobile has been the backdrop of Christmas cards and admired by fans of opposing teams. It’s been named best tailgate of the week at Memorial Stadium and on ESPN.

So last Sunday night when the Kanbulance took a victory lap down Massachusetts Street to celebrate the KU men’s basketball team’s win against North Carolina, its owners were a bit stunned by how much attention it received.

“I was surprised by how many people haven’t seen it,” Wes Smith said. “It was pretty fun.”

“You can tell who has never seen it,” Amy Clark said. “They go ‘oh my god’ and fumble for their phone to take a picture.”

With lights flashing and KU fight song blaring, the converted ambulance joined thousands of fans downtown to celebrate the KU team’s appearance in the Final Four.

“People were taking photos and asking questions, ‘Can I get a picture? Can I sit on the back?’ It was an incredible thing,” Kitcha Paranjothi said.

Three years ago, the Kanbulance was purchased by four Lawrence families: Wes Smith and his wife, Lisa Leroux-Smith; Kitcha and Adrienne Paranjothi, David and Amy Clark; and Paul and Jana Wallen.

The group has nine children among them, ages 8 to 13, and has ties to KU. The families started tailgating the traditional way, out of the back of SUVs. But, the men in the group were looking to expand their tailgating opportunities. Some of them were considering an old school bus.

“But then we thought where in the heck can you park a bus?” Paranjothi said.

Then they learned about the “ultimate tailgating machine,” or “fanbulances.”

As luck would have it, a police department in a St. Louis suburb was auctioning off a green and yellow striped ambulance that had been part of its DARE program. The group won the auction and brought the ambulance home to Lawrence.

It took AJ’s Custom Signs and Graphics three months to decorate the ambulance, which has blue and red stripes on the sides and lights on the top in Jayhawk colors. Football helmets and the words ResKU adorn the sides. A Jayhawk peeks out over the hood. Above the doors that swing open in the back is Allen Fieldhouse’s familiar warning: “Pay heed, all who enter. Beware of the Phog.”

The families made sure to get the proper permission from KU to use its logo and colors.

“They just want to make sure we weren’t going to make money off of this. We said not at all. If anything, it’s a money pit,” Paranjothi said.

The Kanbulance has the ability to haul 10 chairs, two coolers, a gas grill, propane tank, generator, awning and buffet tables. And that’s just what gets carried in the outside compartments.

Inside, the ceiling is covered in autographs from coaches, current and former players, fire fighters and emergency medical technicians. On the roof is an 8-foot yellow goal post that gets put up for tailgates.

The families host planning meetings to map out who will be in charge of what games and what food to bring. On game day, the tailgates can include as many as 200 people, and the men have been known to arrive as early as 5:30 a.m. to begin setting up, which takes about 45 minutes.

“All the families are Jayhawk fans, and we can finally afford to do something like this and act like we’re 21 years old again,” Paranjothi said.

The Kanbulance doesn’t just travel to football games. It appears at birthday parties, Sunday afternoon Lawrence’s youth football games and has been auctioned at school fundraisers as the transportation for pub crawls. It was even the “limo” at the wedding of a former KU football player.

But Saturday evening was the first time the Kanbulance appeared downtown after an NCAA Tournament win.

“We bought it right after we won in ’08,” Smith said. “So we were thinking, how awesome would it be to have it in the parade?”

Last year, when KU played Virginia Commonwealth University during the Elite Eight round, the Kanbulance crew was ready to mobilize for the downtown party. Unfortunately, that celebration never took place.

“I was just as ready,” Smith said. “But unlike (Sunday night) I got to drive home by myself. There was not a single soul with me after we lost.”

That wasn’t the case on Sunday evening. Shortly after KU’s victory, the families took off from a watch party, loaded the kids into the Kanbulance and headed downtown to celebrate.

“Hopefully we can do it again Saturday and Monday,” Paranjothi said.