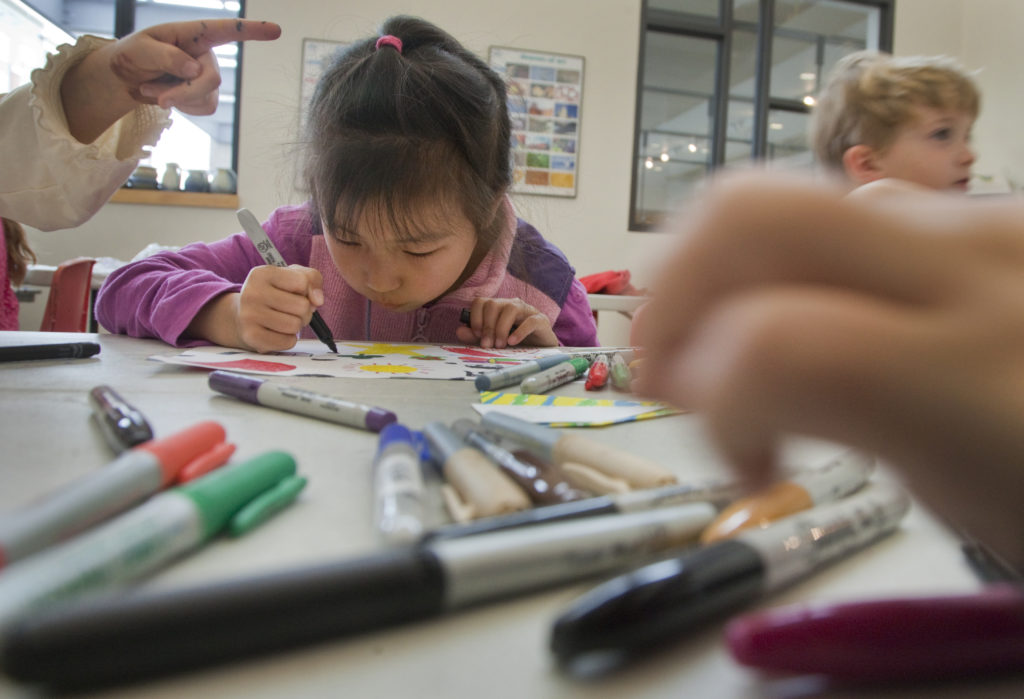 Yifan Wang creates colored stickers during a spring break guerrilla art workshop Tuesday at the Lawrence Arts Center. Children in the workshop created temporary artwork that they could leave in public places for others to enjoy. 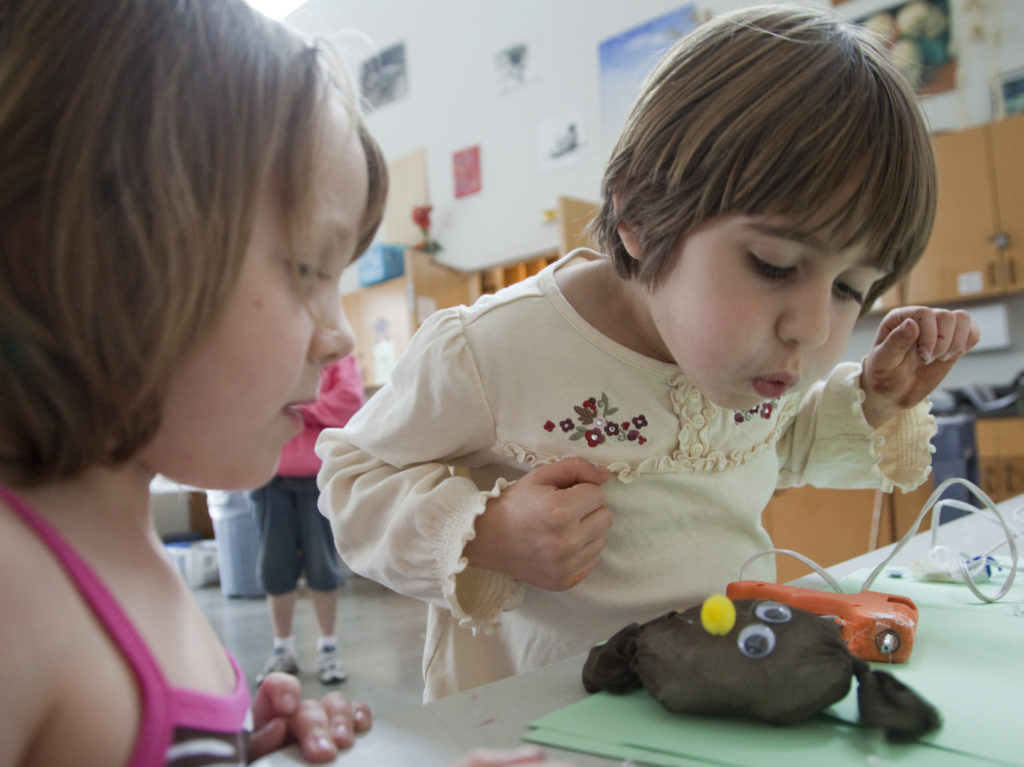 Helen Henry, right, blows on her flying squid to dry the glue-attached eyeballs as she and Molly Kelly participate in a spring break guerrilla art workshop Tuesday at the Lawrence Arts Center.

On a small, red rock, 10-year-old Zianna Baumgartner painted a face with a mustache and glasses.

But where this unique piece of art would be displayed had yet to be determined.

“I was thinking of maybe in a tree, so it’s looking down at you,” Zianna said.

Welcome to the world of guerrilla art, where public spaces are the canvas.

Zianna is one of the 20 children participating in the guerrilla art camp being taught at the Lawrence Arts Center this week. On Tuesday morning, students were painting rocks, coloring decals and building “flying squids.” All the objects were destined for the outside environment, where they are meant to draw smiles and second looks from those passing by.

Those places could be trees, alleyways or even puddles. His classmates went on to describe it as a way to make a boring place more interesting, beautiful and cheerful.

On Tuesday, Jonah was in the process of creating a flying squid, a toy constructed out of a nylon stocking, filled with plastic grocery bags and tied with ribbons. The toys were going to be flung throughout Lawrence with a note attached asking that people play with them.

“I hope (people) think, ‘Who did this and where did it come from?'” 8-year-old Hobson Herlihy said of the work.

Part of the allure of guerrilla art is that it is free and accessible to everyone, said Jessica Conner, who is the studio director at the arts center and one of the teachers of the class.

“Art doesn’t need to be stuffed into a white box,” Conner said. “I also want kids to know they can go out and make a difference. … If they make something silly or cool and place it somewhere to find, they may never know who the person is (who finds it). But it may have made someone smile and made their day a little better.”

The concept of guerrilla art has become more mainstream in recent years partly due to the Oscar-nominated film “Exit Through the Gift Shop,” which focused on the international street art scene. The director of the film is Banksy, an anonymous English graffiti artist whose work has popped up on public surfaces from New Orleans to Jerusalem. Much of his art is satirical and comes with political undertones.

The class won’t exactly turn out the next generation of Banksys. At the start of the class, the teachers established ground rules. For starters, the art must be temporary, which would prohibit spray paint, and should be displayed on public, not private, property.

“It has to be able to revert back to its original state,” Conner said.

The class is using chalk, glues and paints that will wash away after a couple of rains. In the next couple of days, the students will begin to scatter their guerrilla art throughout the Kansas University campus and downtown.

“Keep an eye out,” Conner said. “You never know what you’ll find.”