Daytripper: Back to the future: 1950s All-Electric House is totally wired

The living room in the 1950s All-Electric House is totally wired. The painting on the mantle hides a television. 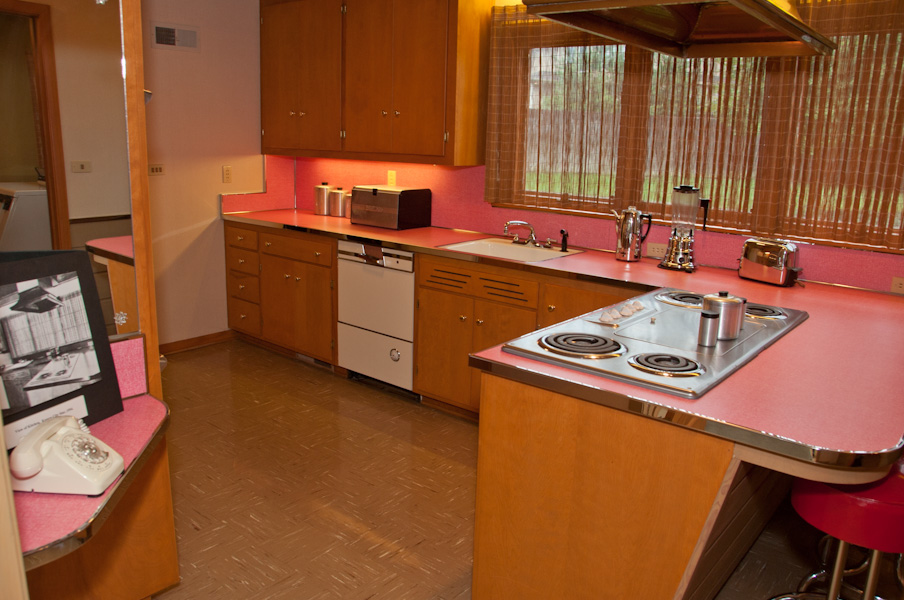 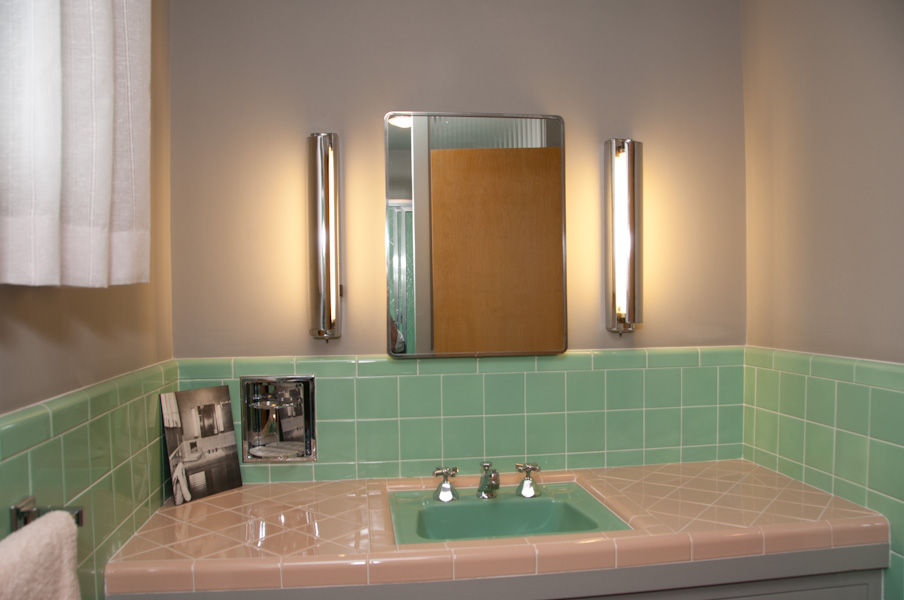 The bathroom's green tile was all the rage in at the time this model home was built in the 1950s.

Attention, harried housewives! Tired of doing everything by hand? Imagine a house with every modern, newfangled convenience, even a mangle iron!

Life … at the touch of a button! All the electrical outlets, waist-high, so you don’t have to bend down too far while wearing high heels! A special bedside remote control, so that when you wake up in the morning, you can turn on your coffee pot in the kitchen before you step out of bed! A vanity mirror with different lighting for daytime and nighttime makeup! Even electric curtain openers!

Ladies, it’s time to lace up your saddle shoes, put on your best poodle skirts and cruise on over in your chariots to the 1950s All-Electric House, a vintage Kansas City Power and Light model home in Johnson County, so that you can see how electricity can make your lives better and healthier and make women’s work easier!

If you were a suburban Kansas City-area homemaker in 1954, such an invitation would have been very tempting. In fact, the model home built by KCP&L in Prairie Village as a showcase for the latest innovations in modern electric living was toured by 60,000 people from March through October 1954 — and the population of Johnson County at that time was 60,000!

The most amazing feature of the house was a brand-new device, “the year round air-conditioner … known as the heat pump.” Technology was of keen interest to homebuyers during the 1950s, when wartime materials and mass-production techniques were applied to home construction, appliances and furniture.

Today, the five-room ranch house still exists, meticulously restored to its original appearance, as a permanent display on the grounds of the Johnson County Museum of History in Shawnee. Guided tours are offered every half-hour from 1 p.m. to 4 p.m. Monday through Saturday for a small fee ($2 for adults and $1 for kids).

Baby Boomers and those just curious about lifestyles from this nostalgic era can enjoy a real “Blast from the Past” (an all-electric blast, of course!) when they step inside the house and step back in time.

Just how electric is the All-Electric House? Well, for instance, the bathroom, which practically jumps out to meet your eyeballs with its mean, green, “Emerald City” color scheme, boasts not only fluorescent lights, but also a suntan lamp and an “ozone germ lamp” to ward off colds and flu. You might wander out of there feeling as if you’ve caught “Wizard of Oz” fever, though, as even the toilet is a startling, almost-neon green. Only the salmon-pink color of the countertop surrounding the green sink breaks up that once-popular “seasick” look.

When you wander back out into the hallway, you’ll come face-to-face with the fashionable burlap wallpaper of the time. (If a woman’s husband couldn’t afford to buy her an all-electric house, he might be persuaded to indulge her with some cool burlap wallpaper!)

Throughout the entire house, you come in contact with “Moon Glow Track Lighting.” The photo sensor is in the garage, making the lights come on all over the house. (Remember, the house was built more than 14 years before the first Apollo moon mission, so “Moon Glow” would seem like a very exotic and “sci-fi” concept to those housewives with bouffant hairdos and their ducktail-wearing guys.)

The master bedroom in the house must have seemed especially “nifty.” For couples addicted to “I Love Lucy” (original episodes, not Nick at Nite reruns!), the two twin beds spaced discreetly apart looked quite appropriate and would definitely have pleased the overly modest censors of the day on a Desilu Productions set. The master bedroom, of course, features a master switch, with which the happy couple could pretty much run the whole house. And, in a nod to fashion, the bedspreads are both a demure salmon pink, to match the bathroom countertop!

The living room boasts a huge painting of waves crashing against rocks in the center of the wall above the fake fireplace. Flick the appropriate switch, and the picture slides back to reveal a hidden television set. Three separate remote controls open and close the curtains, dim the lights in the room and operate the TV. If the homeowner wanted to make the neighbors jealous of his futuristic technology, he could even pipe the sound of the television outside on speakers on the patio!

The all-electric kitchen and adjoining laundry room are the essence of modern efficiency and convenience, with their array of modern appliances, including a dishwasher, garbage disposal, freezer, clothes washer and dryer, and an electric water heater. (June Cleaver never had it so good.)

No wonder a home in the suburbs, complete with a patio for barbecuing and a fridge for storing the Jell-O, seemed to be the quintessential American Dream after World War II.