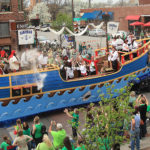 The 25th annual St. Patrick's Day parade included 162 floats on Saturday March 17, 2012. The Sandbar float, which won first place, was one of the last floats up Massachusetts Street.

The Lawrence sky was a little gloomy Saturday morning as the community prepared for the 25th annual Lawrence St. Patrick’s Day Parade.

The greens — kelly, amazon, mantis, emerald, jade, neon, Persian and hunter, among others — were a little dull as thousands lined Massachusetts Street.

Then the parade began, and the sun came out.

The green beards, shirts, skirts, wigs, shoes, motorcycles, hats, horses, dogs, vests and even the portable toilets in South Park were able to show their truest green shade as 160 floats and parade participants glided through the heart of downtown Lawrence.

And all variety of floats were welcome at the Lawrence tradition that has raised nearly $700,000 for area charities since 1987.

There were the real labors of love, such as The Sandbar’s pirate ship, which was honored with the grand prize.

The ship’s “first mate,” Sandbar owner Peach Madl, showed off the features of the massive float, equipped with his and hers restrooms.

Madl said they’ve been building a float for about 15 or so years and typically stick with some sort of beach or aquatic theme.

“It’s a ritual for us. All our friends and family get together every year,” she said, giving a tour and warning of pirates — mostly waist-high kids — scattered around the ship. The ship came equipped with a dance floor, ample seating and stood about 20 feet high in some areas.

Then there were the more modest participants, such as the Social Service League’s “float,” which was actually just an old pickup truck.

Board member Janet Cinelli didn’t really have words to describe a theme for their float. Various stuffed animals — pigs, bears, horses, cats — hung from racks in the truck’s bed. It was cutesy or macabre, depending on your perspective.

Cinelli, however, like many other nonprofits who participated in the parade, were promoting upcoming events or causes. Cinelli and the board members trailed the truck, wearing used prom dresses, to raise awareness about their April 14 free prom dress giveaway at the Social Service League.

Some board members went for the eccentric.

“There are some that are much prettier,” Cinelli promised of their stock of dresses.

Then there were the entertainers, such as Gary Mosby and the Kansas City Pipes and Drums, bagpiping and whistling their way through the parade, kilts and all. The musicians wouldn’t make it all the way to the parade’s end, at the Flamingo Club in North Lawrence, but they’d peel left across the bridge and play for patrons at Johnny’s Tavern.

They were to take donations for their performance and donate the $1,000 or so to charity.

“Lawrence has been wonderful the 20 years we’ve been doing this,” Mosby said. “Walk into a bar with a pipe band, and their music stops, and they’ll let us play.”