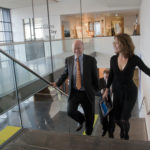 Rocco Landesman, National Endowment for the Arts Chairman, left, takes a tour of the Lawrence Arts Center with director Susan Tate. After the tour, Landesman met with members of the LAC staff and area arts supporters as part of his nationwide Art Works tour.

The chairman for the National Endowment for the Arts, in a visit to Lawrence on Thursday, made the case that the arts should be publicly funded, taking the opposite position of Kansas’ governor, who vetoed the state’s entire arts budget last May.

Rocco Landesman, the NEA chairman, said making that case to policymakers in Washington, D.C., was an essential part of his job.

“The arts are integral to the real problems we’re facing today,” he said at a forum at the Spencer Museum of Art on the Kansas University campus.

Economic development, urban renewal, education and many other areas can be bolstered by the arts, he said.

He also addressed issues Kansas was facing after the state government removed funding for the Kansas Arts Commission.

Gov. Sam Brownback removed the commission’s entire budget last May, and Kansas became the only state in the country to eliminate its arts funding. Brownback at the time argued that the state should focus on “core” functions like education, social services and public policy, and rely on private funding to support the arts.

The NEA then told Kansas it wasn’t eligible for federal funding because it could not demonstrate that it was supported financially by the state. Kansas then lost $1.3 million in federal and regional matching funds as a result.

“It’s mandated by law that there be a state match,” Landesman said in response to a question about the situation. “We don’t have any discretion in that.”

Landesman said he was working with other government agencies to look at possible connections to the arts. In the Health and Human Services Department, for example, he said the arts could play a role in early-childhood development, particularly with music. They also could have a role in the geriatrics and mental health fields, he said.

“The arts are as important as anything else that our federal government — or any government — deals with,” Landesman said. “That’s our story and we’re sticking to it.”

He works with departments like transportation and agriculture, too, he said. It’s not just about road-building anymore.

He joined with other panelists to discuss “creative placemaking,” the joining together of public, private, nonprofit and community groups to connect a neighborhood or city to the arts and cultural activities.

“I think it’s safe to say that other states don’t want to be in the position Kansas is in now,” he said. “Everybody wants support and funding.”

But, after visiting Topeka on Wednesday and the Arts Center and the Percolator in Lawrence, he said he was impressed with the way people came together in support of the arts.

“We saw this in Topeka,” Landesman said. “And we’ve seen it in Lawrence, squared.”

“We wanted him to see the best of Kansas and see how things were working,” she said.

Kevin Willmott, a KU film professor, asked Landesman if he was concerned about what Willmott called “corporate censorship” of the arts, saying if a movie he created wasn’t perceived as being able to make money it wouldn’t get seen.

Landesman replied with a line that drew applause from the audience.