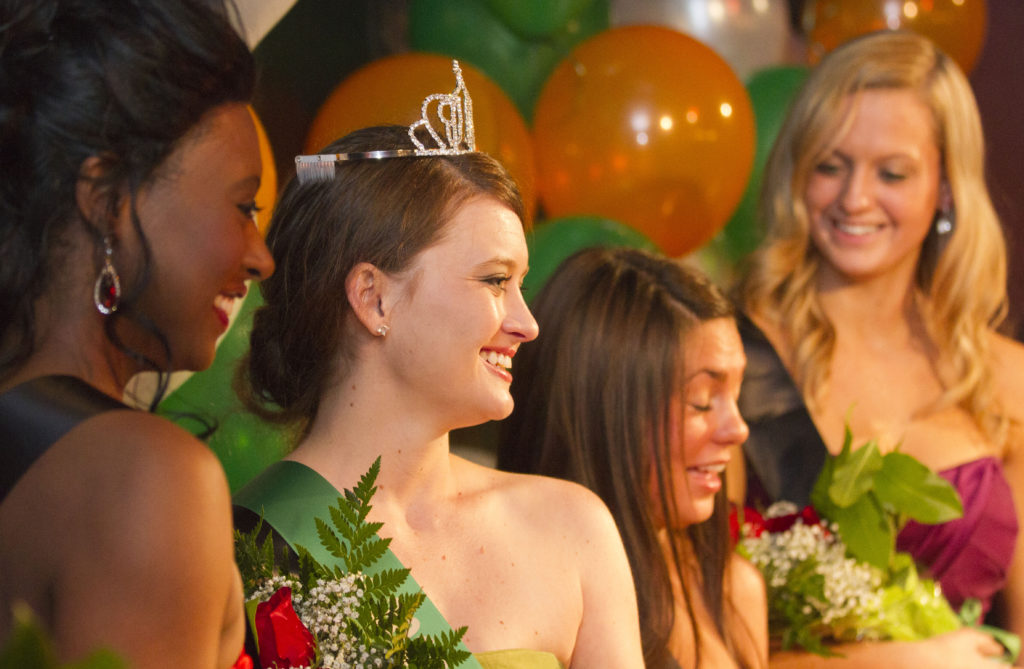 Cassie Weatherwax, second from left, and other candidates pose for photographs after Weatherwax was named the 2012 St. Patrick’s Day Parade queen during a ceremony at the Flamingo Club in North Lawrence on Sunday. Weatherwax said this would be her 12th year participating in the parade.

On the northeastern edge of town, a 25-year tradition took place yet again: A queen was chosen for the Lawrence St. Patrick’s Day Parade.

After a year of fundraising efforts and plenty of good times, parade supporters gathered at the Flamingo Club, 501 N. Ninth St., for the coronation dinner. Since January, the six candidates worked events and collected donations for the committee’s fundraisers.

“Without them, we wouldn’t be able to have as many events as we did,” said Katelyn Affalter, the 2010 queen. “They’re the heart and soul.”

This year’s queen candidates were Ally Munk, Alex Akers, Audrey Pope, Cassie Weatherwax, Chelsea Jennings and Lacey Johnson. Most of them were encouraged by friends to be candidates on behalf of charities. Akers said it is a major time commitment but one that is a lot of fun.

Terry Bowen, a fifth-year committee member, said the coronation was the final preparation for the parade. Then again, she said, all the events are kind of a preparation.

After all the votes were cast, the committee members announced the parade’s grand marshal and the senior queen and king. The grand marshal, Mike Rebich, stumbled upon the first-ever parade during a stop in Lawrence while working for ABC Sports. Although he lives in Georgia, he has remained a part of the parade ever since. Dwayne and Ruby Peaslee were honored as the senior king and queen for their longtime support of the community.

Next, the queen candidates took the stage and were handed bouquets of roses. Affalter, the 2010 queen, opened an envelope and announced Weatherwax the winner. Weatherwax, a Lawrence native, told the crowd it would be her 12th year in the parade.

Many in attendance have been involved since the beginning. Throughout the night, a projector displayed photos from the past 25 years.

“Smiles, drinking beer, having fun and raising kids,” said Mike Lohmann, chairman for the historical committee, to the crowd. “This is what it’s been all about.”