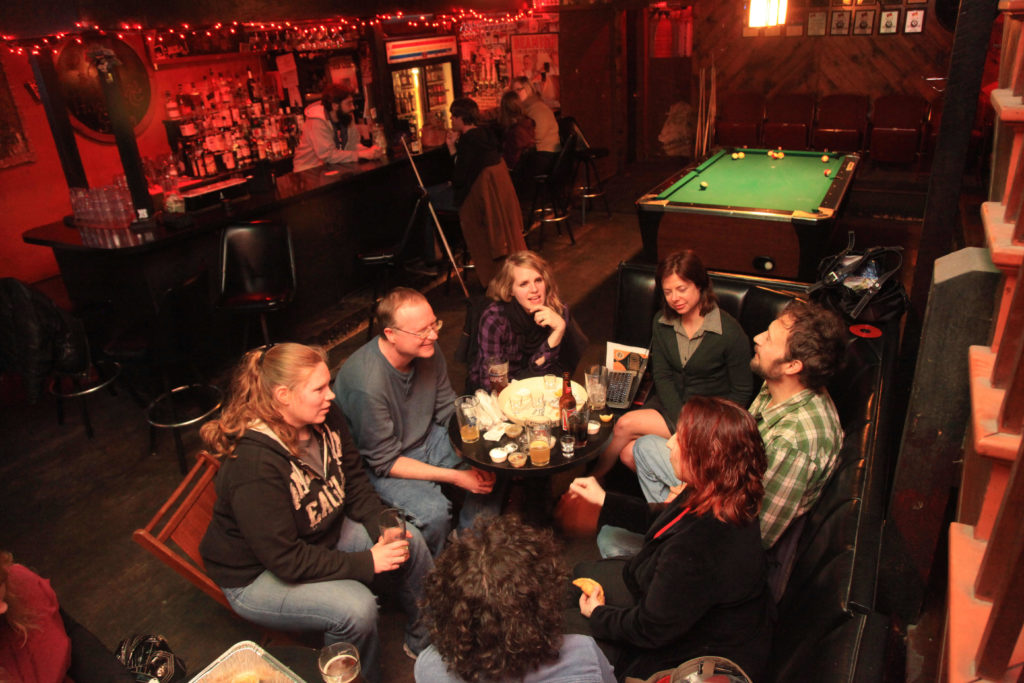 The PBR Book Club has its March meeting at the Eighth Street Tap Room.

A heavy, heady argument breaks out in the Eighth Street Tap Room on a Monday night. It may be the vodka shots kicking in, or the Pabst Blue Ribbon imbibed before it, but something’s got this group of seven whipped into a debate. 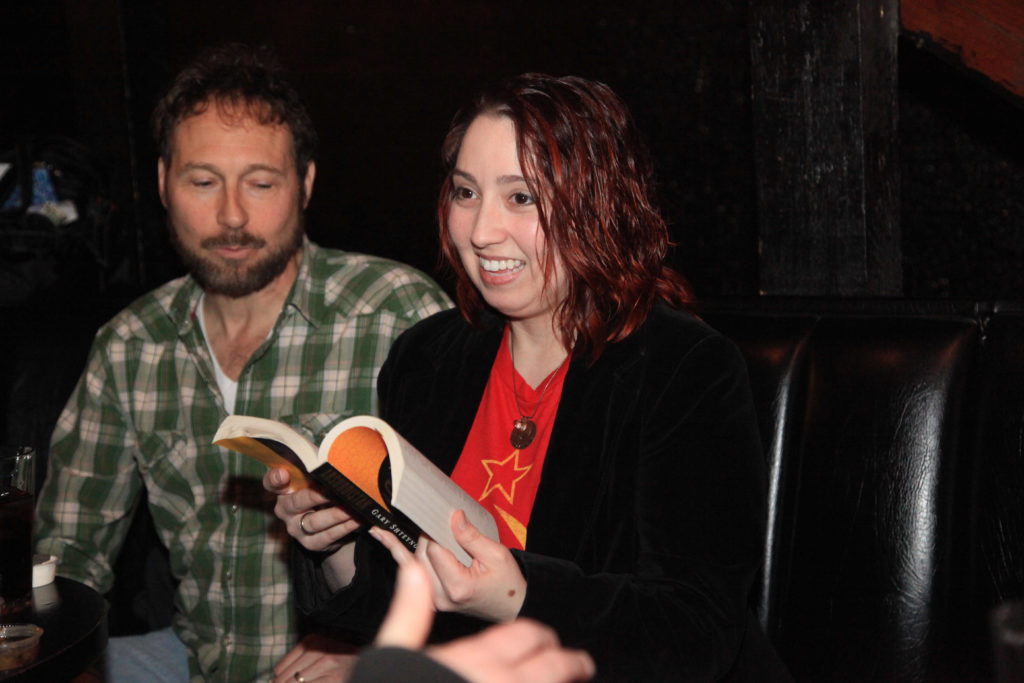 From left, Steve Dahlberg, listens to Courtney Shipley talk about the book Absurdistan at the latest meeting of the PBR Book Club. 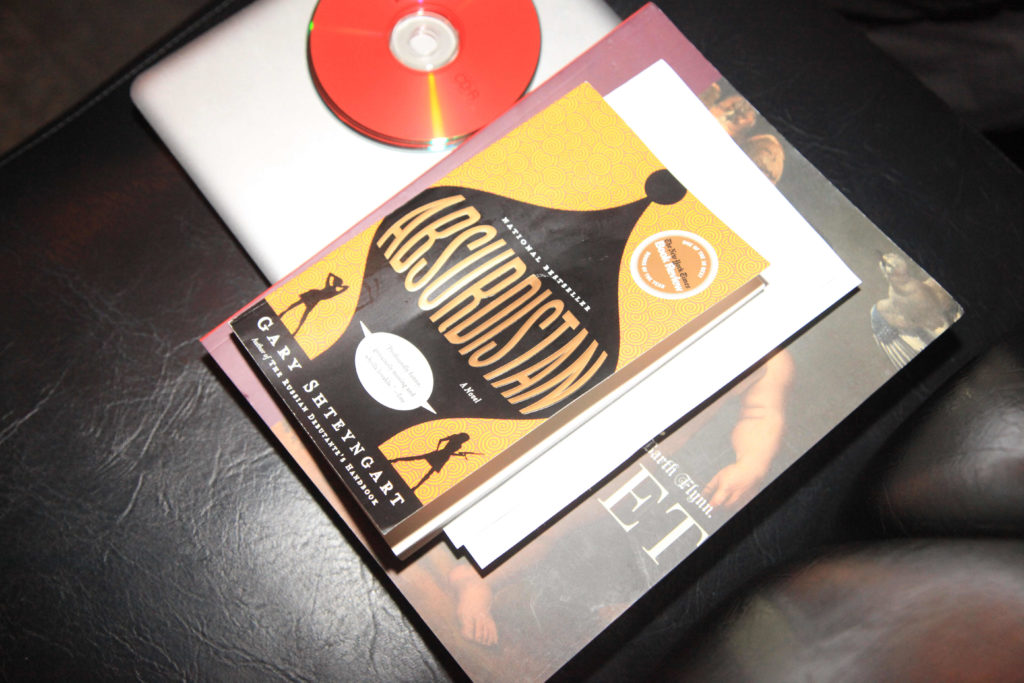 Absurdistan by Gary Shteyngart is the latest book on tap for the members of the PBR Book Club, who revel in its anti-literary atmosphere.

The exact topics of the discussion float around the barroom floor as each person pipes in his or her two cents.

Questions get passed back and forth like the perogies these readers heartily share: Is main character Misha really in love? Does anyone now feel a little ‘bad’ for being so Western? Is it all satirical or are there some truths to be gained from the land of Absurdistan? Does Gary Shteyngart suffer from some sort of penis envy?

This meeting — with hardy debate, drinks and lots of laughs — is typical for this book club. It’s not, after all, your grandmother’s book club.

It started largely as a joke on Twitter last September, four books ago. Richard Noggle, a Kansas University lecturer and Rachel Smalter Hall, an adult services librarian at the Lawrence Public Library, got it going after fellow Lawrencians displayed a serious interest.

Now the group picks a book — February’s was Shteyngart’s “Absurdistan” — and then meet at an appropriately hipster locale to discuss. They’re all very active on Twitter, hashtagging #pbrbookclub to keep discussions going — spoilers allowed only with warning — and also work on a collaborative blog during their reading (pbrbookclub.blogspot.com) and through their social media savvy have even had interactions with several of their authors.

The “Aburdistan” meeting attracted seven members — one, Karen Matheis, made the drive from Johnson County — but the online interactions garner many more.

Members revel in their hipster label. They come from different backgrounds and ages. The group deploys a self-mockery about its literary (and drinking) interests that participants seem to enjoy making fun of. They’re at the same time picking astute literary fiction to read — and the apparent hipster drink of choice to brand themselves with — and open to anyone who wants to join. It’s about laughing at elitism while having fun within what at least looks like its bounds.

“It’s about hanging out with smart people in a non-stuffy way,” Noggle says in an interview in the Bourgeois Pig.

Smalter Hall says she’s often looked to as the librarian to lead discussion and provide “book club order.” She’s happy to do it, she says, because she often leads more traditional book clubs and appreciates the organic nature that this one has.

“We joke that we’ve got people more interested in reading because we brought beer to the table,” says Smalter Hall, who’s affectionately called “Nanners” at the meeting after her “Librarian in a Banana Suit” blog. “This is different but it’s still about the great things book clubs can do for people — readers still want to talk about what they’re engaged with.”

Member Steve Dahlberg joined via Twitter and says he was attracted to the “meta discussion” that took place online and in person. Now he’s hooked, having read most of the group’s selected books. Some he liked, others not so much. But he loves the discussion, he says, and just the hanging-out-style fun of getting together with other readers.

“This is the antithesis to the stuffy New York-type literary groups that are popular now,” he says.

With its social media presence going strong, the club has picked a new book for March and invites anyone to join along. It’s Miranda July’s short story collection “No One Belongs Here More than You,” and they plan to meet April 2 at the Tap Room, 801 N.H. They’ve already picked their April selection, too, a mixed media book called “A Very Minor Proverb.” Its publisher contacted the group and has set up a Skype date with the author when it comes time to meet — “because it has something to do with PBR,” Noggle says.

So their drinking and reading — and blogging — will continue with just as much joking and seriousness as it began. But there’s one more thing, member Courtney Shipley says from the March meeting about this article.

“Make sure we come off as really pretentious.”

And the group erupts in a laugh.

­– Reporter Alex Garrison can be reached at 832-7261. Follow her at Twitter.com/alex_garrison