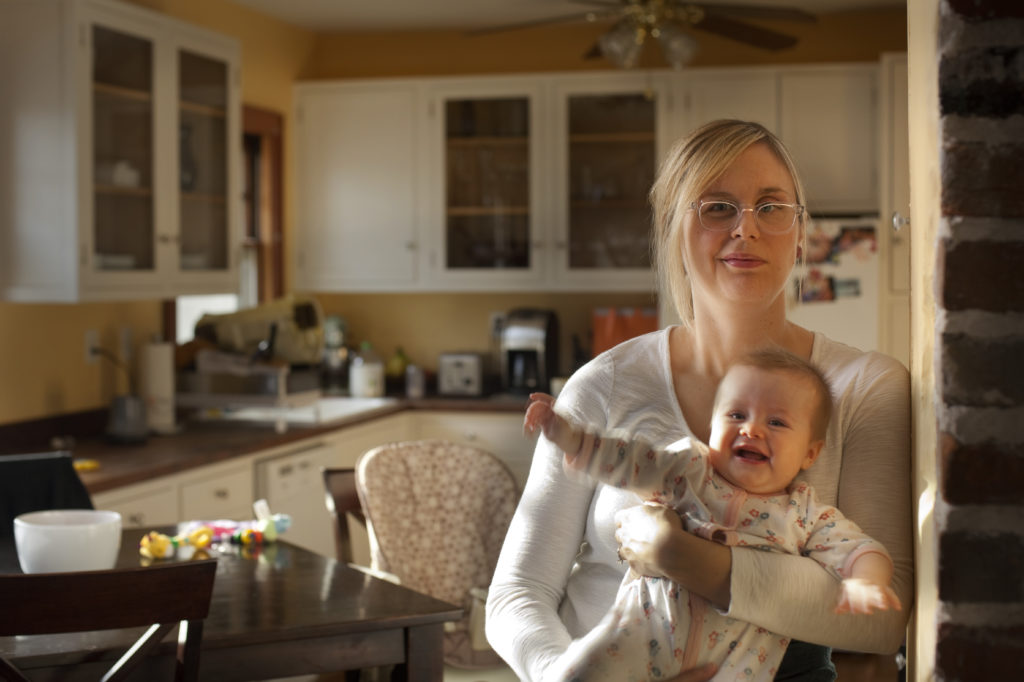 Nearly seven years ago, at age 22, Lawrence resident Louise Krug suffered from a brain bleed that caused weakness, dizziness, headaches and difficulty with hearing and vision.

“It just happened out of the blue — kind of like a stroke,” she said.

She had just graduated from Kansas University with a journalism degree and was pursuing her dreams in California with her boyfriend. She had done some freelance work and was set to begin her first day as a reporter for the Ventura County Star. Instead, she ended up in a hospital emergency room.

The next four years would be filled with doctors’ appointments, tests, surgeries and a lot of therapy. She would relearn how to bathe, eat, walk and talk.

The experience is the subject of her new book, “Louise: Amended,” which will be released nationally April 17. The book is now available locally at The Raven bookstore, 8 E. Seventh St. 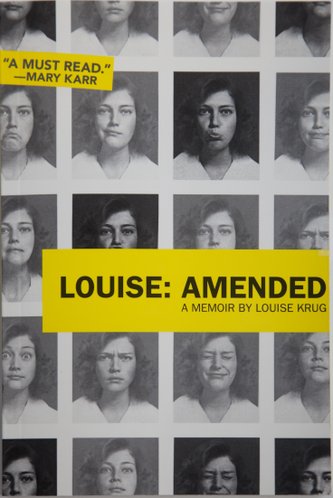 Krug discusses her book between sips of bottled water and a latte during an afternoon interview in her office on the third floor of KU’s Wescoe Hall.

She’s now 29 and pursuing a doctorate in creative writing while she teaches writing and literature courses part time. She’s also married and a new mom. A framed picture of her 6-month-old daughter, Olive, in a swing and smiling from ear to ear, sits on her desk near a lamp. If there’s a second book, she says motherhood likely will be the subject.

“I can’t see how it would be about anything else,” she said smiling. “My life right now is so much around being a mom.”

Krug began working on “Louise: Amended” three years ago as part of her thesis for a master’s degree in fine arts. She credits her thesis adviser, Deb Olin Unferth, for helping her land the book deal. Olin Unferth had moved to the East Coast and attended a party where she bumped into a friend of a friend who was starting a small press in Brooklyn, N.Y. Krug emailed a copy of her 140-page thesis and soon she had an editor and publisher. 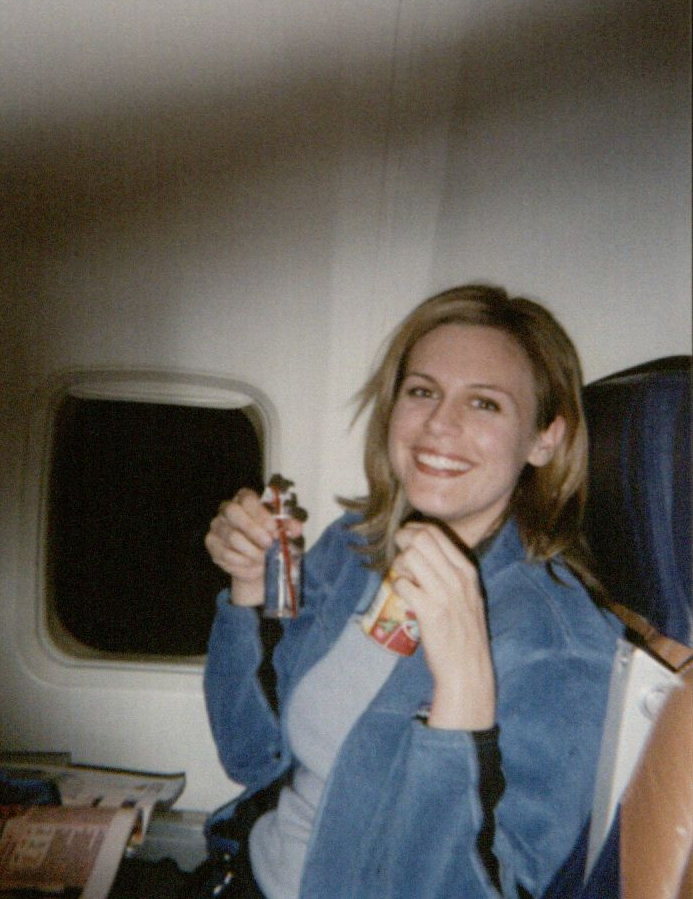 Louise Krug on an airplane to Jamaica in 2004.

“I wish I had some great publishing advice, but honestly I don’t,” she said. “I was kind of lucky, I guess.”

The 192-page book is written in three parts: before, during and after her brain surgery. But it’s not just about her health. It’s also about relationships. The book is told from rotating points of view, including her mother’s, father’s, brother’s and boyfriend’s.

Page 40 — When Claude gets under the covers he feels angry at Louise for being just a body to sleep next to, nothing else, then feels bad for his anger. He tells Louise he loves her, but she must be asleep, because there is no reply.

To get those views, she said she made frequent calls and asked a lot of questions: How did you feel after waiting for nine hours during the first surgery and it didn’t work? How did you feel when I was bitchy for an entire summer?

She said she hopes she didn’t hurt any feelings in writing the book and that portrayals were accurate. “They’re all still talking to me, so that’s a good sign,” she said.

Her mother, Susan Lynn, whose name is Janet in the book, said she thought Krug did a good job of capturing her concerns as a parent. She also learned a bit about herself.

“I always thought I was kind of a hip dresser until she pointed out that I really do wear Birkenstocks every day,” Lynn said, laughing, during a telephone interview.

Lynn, who is publisher and editor of The Iola Register, described Krug’s honesty as refreshing. “I think it’s insightful to the human character and she doesn’t let herself off the hook,” she said.

Page 181 –The bedroom is the same dark mess of purple sheets and a mattress, and I remember lying there, day after day, after returning from the Los Angeles hospital. One of my friends finds me in the bedroom closet and stops me from pulling all of the buttons off Claude’s shirts. I don’t have Nick. I don’t have Claude. I don’t have anything but my own self-pity. No, I tell myself. Don’t.

For the book cover, Krug chose a pamphlet that she had received during treatment for facial paralysis at the Mayo Clinic in Rochester, Minn. The pamphlet has pictures of a woman doing facial exercises.

As for the title, she knew she wanted something short and easy to remember.

She said the toughest part of writing the book was revisiting painful memories again and again.

Krug suffered brain bleeds as a child and as a teenager. The first came when she was in fourth grade. She would suffer temporary vision problems and headaches but would quickly recover. Krug’s mother said doctors didn’t want to operate and led them to believe that it eventually would just cauterize itself because with each successive episode there seemed to be fewer symptoms that wouldn’t last as long.

“Her last bleed happened when she was in high school and then she went all through college with nothing and so we just thought, ‘Wow, she’s really out of the woods,'” Lynn said. “But, it wasn’t to be.”

Krug’s condition continued to decline in the days following her ER visit in California. She couldn’t stand noise or light and suffered headaches in addition to the paralysis. Her mother remembers crawling into bed with her and holding her, telling her everything was going to be OK, although deep inside she, too, was terrified.

Page 35 — Janet knows she had done something wrong. She should have worried about Louise more. She didn’t call Louise for a week after she moved to California — she had wanted Louise to feel grown-up. Maybe she fed Louise bad foods when she was a baby?

Krug had a cavernous malformation, or a cluster of abnormal vessels, the size of a marble in her brain stem, the area that controls vital functions such as swallowing and breathing. A neurosurgeon in California said the malformation needed to be removed but the procedure was too risky for him to perform.

The family found a surgeon at The Mayo Clinic and the first attempt to remove the mass on April Fool’s Day didn’t work, so they tried a couple of days later and got it. But the surgery left Krug with disabilities including paralysis.

“I think psychologically for Louise and for all of us, it was a disappointment,” Lynn said. “I mean, ‘Yes, you are grateful that your daughter has survived the surgery.’ But, we all hoped the surgery would make everything perfect or better again.”

Page 103 — I start out crawling. My physical therapist, who is handsome and Scottish, lifts me out of the wheelchair and onto the rehab gym’s mat. He helps me get into a position I remember from Pilates mat class, on my hands and knees. He gets on the floor beside me and tells me to do what he does. We crawl.

Krug went through six months of intense physical therapy. After three weeks at The Mayo Clinic, she moved back to her hometown in Michigan with her father and stepmother and continued therapy. Then she announced she would be returning to Lawrence to pursue a master’s degree.

“I think she tried to do things too soon like moving back to Lawrence, but then I think it was that determination that has helped her survive,” her mother said. “Had she played the role of a victim, she wouldn’t have overcome a lot of the things that she has.” 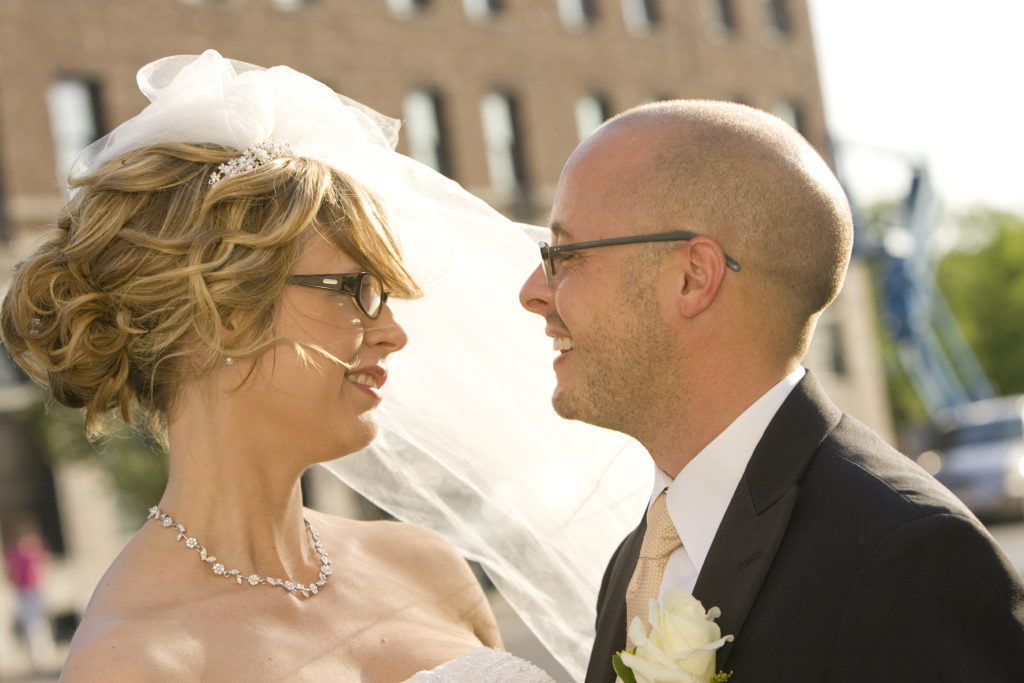 Louise and Nick Krug were married in 2009.

Krug’s last surgeries were in 2006 and 2007 at Kansas University Hospital, where doctors tried to help straighten her wandering left eye and help her regain some movement on the left side of her face.

“All of this stuff never works as well as expected, but it did make things better,” she said.

Because of the facial paralysis, she can’t blink or close her left eye, so her eyelid is sewn partially shut to help keep her cornea moist. Krug has a prism in the left lens of her glasses that helps correct the double vision, but it’s still there, she said.

“It’s funny because I’m a writer and a reader and that’s what I do all day long, but you just learn to focus on one if you are seeing two lines.”

She has partial paralysis in her right foot that makes it difficult for her to walk and keep shoes on. She also has trouble using her right hand for simple tasks like drinking or typing. Fortunately, she said she’s always been left-handed.

Today, she can look at the bright side of things, but that wasn’t always the case.

Page 128 — I will not be talked into smiling for pictures — the asymmetry is too awful. The only way I tolerate being in a photo is wearing my sunglasses, staring expressionlessly at the camera, my mouth a straight line, waiting for it all to be over.

“I lay it all out there,” she said. “I include a lot of potentially embarrassing stuff about myself and I don’t cast myself in the most flattering light, so I hope people don’t misunderstand what I’m trying to say.”

Her hope is that people realize it is possible to lead a happy life but wish that things were different. That it’s OK to want to be beautiful although it’s not supposed to matter.