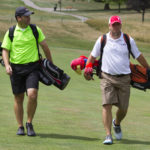 Barry Watts, left, and Brandon Urban, both of Lawrence, walk to the green on the 18th hole as they shoot a round of golf at the Lawrence Country Club in preparation for a 100-hole golf event.

Barry Watts and Brandon Urban have scheduled June 25 as a day off from their jobs to go out to Lawrence Country Club, but they plan to play much more than the standard 18 holes of golf.

Watts and Urban will be participating in the Hundred Hole Hike along with 57 others nationwide to raise awareness and money for different charities.

“It is just a wonderful chance to support charities,” Watts said. “It is really the game we love, but at the same time, each of us have a cause that is special to it.”

Watts serves as the youth and children’s minister at Lawrence Heights Christian Church, and he found out in December that Kelly Latham, a former member of his youth group, was officially diagnosed with Stage IV Hodgkin’s lymphoma.

“Even though she is now in college, I have had the chance to really help and support her through this tough time,” Watts said. “We actually just got a report (June 8) that she is in remission. The chemotherapy worked, and things are going well.”

Latham said her battle with cancer was easier with people like Watts helping her and that she is now a cancer survivor instead of a cancer patient.

Watts is raising money for The John & Michael Neal Foundation for Cancer Research, which was founded by John Neal in 2005 to support cancer research worldwide.

“It’s a wonderful foundation,” Watts said. “One hundred percent of the funds go to cancer research, and they split it among two or three different charities, but all of the money goes to that.”

Watts and Urban have set a goal to play and walk 108 holes, and Urban knows that will be no easy feat even with the training he has done.

“I’ve been walking a ton,” Urban said. “I’ve been playing a lot of golf, which has been great … I play in an outdoor soccer league, and I play pick-up basketball, so those both kind of help a little bit. You know, it’s funny because I think probably regardless of what (Barry and I) do, nothing will prepare us for that day. I imagine it is going to be grueling but a lot of fun at the same time.”

Urban will raise money for tiny-k Early Intervention of Douglas County. The organization pairs child-care workers with parents who have special-needs children up to the age of 3.

“So tiny-K, we became involved with them through (my) youngest daughter, Molly, who is 3 (years old) now,” Urban said. “She had some anxiety issues, obsessive issues, just some different developmental growing up. … I just thought it was a great way to repay a little of what they have done for us.”

To support Urban and Watts, go to www.hundredholehike.com.