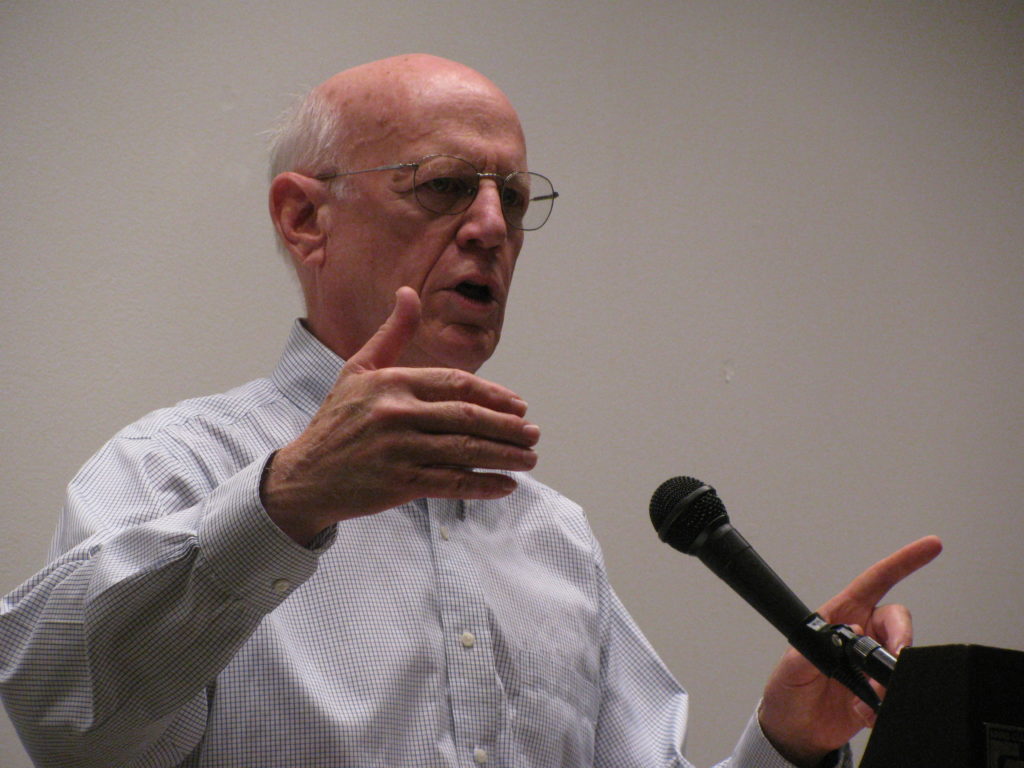 Employees: Tax rates lowered but employees will carry an increased share of the overall tax burden.

Asked if the tax cuts would lead to economic prosperity, as Brownback has promised, Dickinson said the tax cuts were pushed by supply-side economists.

“Personally, I’m not much of a believer,” Dickinson told a crowd of about 100 people at the Douglas County Democratic Party meeting at the Lawrence Public Library, 707 Vt.

Brownback, a conservative Republican, made tax cuts the centerpiece of the 2012 legislative session.

The bill he signed will cut the individual income tax rates of 6.45 percent, 6.25 percent and 3.5 percent to just two rates at 4.9 percent and 3 percent.

It will also eliminate state income taxes for the owners of partnerships, S corporations and limited liability companies. In addition, it exempts from taxes income from farms, royalties on minerals, oil, gas copyrights and patent, and real estate rental income.

“The ramifications of this are really something,” Dickinson said about the business tax changes.

For example, he said, in a partnership of physicians, the physicians won’t pay state income taxes under the new law, but the nurses, lab techs and clerical workers will continue to pay income taxes.

Brownback has said the changes will stimulate the economy like an adrenaline shot to the heart. He said that the tax cuts will create 22,900 new jobs, give $2 billion more in disposable income to Kansans and increase population by 35,740, in addition to normal population growth.

The tax cuts, Brownback said, will “help make Kansas the best place in America to start and grow a small business.” The Brownback administration has said the new law will leave $1.1 billion in the pockets of Kansans during a two-year stretch.

“My faith is in the people of Kansas, not the government’s ability to tax and redistribute,” Brownback said when he signed the law last month. “They know better how to spend their money, and I believe they will do incredible things with it.”

But Dickinson pointed to estimates by the nonpartisan Kansas Legislative Research Department that show the effects of the tax cuts will short the state treasury by $4.5 billion in revenue over the next six years. The current state budget is about $6.6 billion annually.

And the Washington, D.C.-based Institute for Taxation and Economic Policy has stated that the bottom 20 percent of income earners will pay more taxes while the top 1 percent will see the greatest percentage tax cut.

Low-income Kansans will be hit by other aspects of Brownback’s tax bill, which does away with the food sales tax refund and a property tax refund for renters. Kansas will join Alabama and Mississippi as the only states that charge sales tax on food and provide no food sales tax rebate for poor people, he said.

Dickinson said that in discussions he has had with two law firms, lawyers predict “the gaming here will be massive” because businesses will reorganize to avoid paying state taxes.

In addition, income earned by independent contractors will be tax exempt.

“There will be employers in Kansas who will have employees come to them and say, ‘I want to be an independent contractor,'” Dickinson said.

A person in the audience asked what can be done about this law.

State Sen. Marci Francisco, D-Lawrence, said that even if opponents of the tax plan picked up legislative seats in the next election and were able to amend the law, “the more difficult thing is having a governor who will sign those changes.”

Ed Quick, chairman of the Douglas County Democratic Party, said it may take having to elect a new governor in the next gubernatorial election in 2014.

“The more people in Kansas learn about this, there will be an uprising, perhaps,” he said.