More than just books will play big part in the future, Allen says 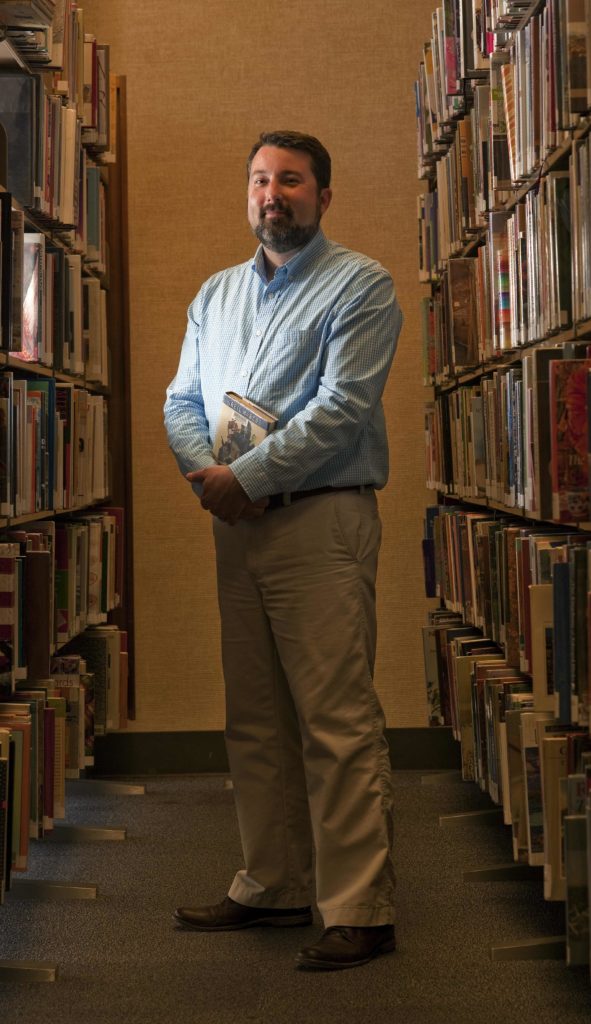 Brad Allen, the new director of the Lawrence Public Library, says not just books, but also products like computer software or digital equipment, will be an important part of libraries in the future. “I really believe people ought to think of the library as a place that provides shared resources,” Allen said.

It may seem odd that when new library director Brad Allen talks about the forthcoming $19 million expansion of the Lawrence Public Library, he often gets most excited about the basement.

After all, there will be plenty of other places that are more likely to catch the eye: a new children’s area, an expanded auditorium, an outdoor plaza area, just to name a few.

But still, when Allen starts pointing at the stack of blueprints that often are spread out in his office, there’s a decent chance he’ll first point to the basement level.

Well, Lawrence, there’s something you ought to know about your new library director: He’s got a thing for basements.

No, the guy hasn’t read one too many Stephen King novels. He just knows the power of a good basement.

He’s known it since middle school when he and his buddies were frequently relegated to a Topeka basement to practice on their dream to become a rock ‘n’ roll band. Eventually, though, they got out of the basement, cut a pair of records and spent part of their college years at Kansas University touring large parts of the eastern U.S. on a minor record company’s dime.

“I learned back when I was in a band that a basement is where you learn your trade before you take off,” Allen said.

“But I want people to understand we’re not just talking about art here,” Allen said. “We might have the tools for you to create a commercial for your business or design a website. We think this is a way we can help the town grow and create vibrant local businesses.”

He also thinks it might be a way to convince some who doubt the wisdom of undertaking a $19 million library expansion during a time when the future of books has never been so uncertain. Yes, books may change. But one thing that won’t is the desire of people to grow, and Allen is convinced they’re still going to want a place to help them do so.

“I think time will show this will be money that is very well spent,” Allen said “because what we are going to be doing here has the power to be transformative.”

Since Allen made the move in May from his job as branch manager and programming coordinator for the Everett Public Library in Everett, Wash., he’s been out pressing the flesh to get to know Lawrence residents. In fact, at times, he’s been battling the flesh.

At the library’s kickoff-to-summer event, Allen, 37, sat at a table and offered to take on all comers in a series of old-fashioned games, including arm wrestling. He learned something valuable about the community through the exercise: Kids find him an easy arm wrestling mark. Actually, he found out something even more instructive: Lawrence residents still flock to the library to have fun and make connections.

“I’m convinced Lawrence is a town that is creative, proud of itself and wants to be great,” Allen said. “I think the library can help in that.”

Allen, who in addition to having served in Everett also has worked in a management position at his hometown Topeka and Shawnee County Public Library, thinks people who focus only on how libraries will distribute books in the future aren’t thinking broadly enough.

He said books became the backbone of libraries because for much of history, books had been “precious and expensive.” It didn’t make sense for everyone to own every book they ever wanted to read. But with digital technology, books have become cheaper. And even if you don’t want to own a book, you no longer need to travel to a library to borrow one, especially if you are willing to read an electronic version.

Allen is still a big believer in the role books will play in the libraries of the future — he noted even today it would cost parents thousands of dollars to buy their children all the picture books they want to read. But even if the future of the book changes dramatically, he said, there are still plenty of products that fit into that “precious and expensive” category.

Certain types of computer software fall into that category, he said. So do some types of digital equipment like high-tech recorders and cameras, and Allen is sure the community has its own lists of such products as well.

“I really believe people ought to think of the library as a place that provides shared resources,” Allen said.

“Just think of all the things you buy once and then never use again. Maybe it doesn’t have to be that way.”

But that type of thinking about libraries, Allen said, also requires a thought that doesn’t exactly pervade America these days. But he thinks it is still alive in Lawrence.

“Government can be good, and it can be helpful,” Allen said. “I know not everyone believes in that, but I do believe together we can create this great shared space we’ll be proud of.”

Not every library has a director whom you can find on YouTube playing the bass guitar. Somehow, it seems appropriate that Lawrence does.

Allen and those middle-school friends who were relegated to a Topeka basement really did have a chance for a career in the rock ‘n’ roll industry.

Although Allen didn’t mention it, the website for the now-defunct band, Vitreous Humor, touts how Allen and the boys opened for the band Everclear and several other big name bands.

Indeed, Allen said record companies did come calling about a career, but he never came very close to pursuing it. It wasn’t that he always knew he wanted to be a library director. But he did have an academic scholarship at KU, and he wasn’t going to start a full-fledged music career unless a record company would pay for him to return to school.

“I’ve always been a total nerd when it comes to learning,” Allen said. “I just loved school.”

In what is an odd turn of events, school even kept Allen away from the library for a while. After graduating with his master’s in library science from the University of Illinois, Allen decided he didn’t quite want to give up school just yet.

He got a master’s in Afro-American Studies from the University of Wisconsin. He wrote his thesis on the Watts 103rd Street Rhythm Band. Not many libraries can say that about their directors, either.

For quite a while, Allen wasn’t sure a career in the library industry was in his future. He wanted to explore a career that focused on the “life of the mind.” Perhaps a professor or something like that.

Somewhere along the way, though, Allen realized something about being a library director — the life of the mind is at the heart of the profession.

Allen said he now spends his days trying to get into the minds of others.

“Libraries really are about making a connection,” Allen said. “You put people and data together, and the people benefit from it.

“But to do it well, you have to get to know people so you can show them the stuff that enriches their lives. It is a simple process, but to me it is the best part of being alive.”