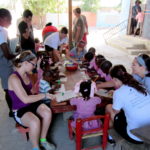 Baker students interact with the kindergarten class offered at Ecole Shalom, the school located on the Haitian-American Caucus's compound we stayed on in Croix des Bouquets, a village outside of Port-au-Prince.

Molly Schmeidler didn’t know very much about Haiti before this winter.

But the Baker University senior from Hays said she learned a lot about the poorest country in the Western Hemisphere on a recent trip. For one, she learned how few students can afford to go to school there. Public schools are few and far between, so if Haitian citizens can’t pay, they can’t get a good education.

“This was a hard-working nation that still has a lot of pride in its people,” Schmeidler said.

The trip was part of an inter-term course at Baker. The two-and-a-half week trip was graded pass/fail for three hours of college credit. The students helped build a school, marked the two-year anniversary of the Haiti earthquake, taught English to students and helped teach computer literacy.

“They’re dealing with issues that students can read about but can’t really understand until they’re there,” said Jake Bucher, assistant professor of sociology, who led the group of 11 students on the trip.

He said he wanted students to be immersed in a particular culture.

“Often, when students go on these trips, they go on sight-seeing trips and it’s more of a tourist experience,” he said.

The damage from the large earthquake is still evident in many cities, including in the nation’s capital, Bucher said, but the country is facing other issues, too. Schmeidler came back with a broader knowledge of the challenges the country is facing, including public health issues, access to clean water and agricultural sustainability issues.

“A lot of these issues were there prior to the earthquake,” she said.

Also, Bucher said he wanted the students to help with a service project. They paired with the Haitian-American caucus to help dig trenches and do other work for a school that could be finished in about a month or two, Schmeidler said.

Bucher said he hoped the students learned about the country beyond what they normally hear reported in the media.

“It certainly is very much a developing country, but it’s not a helpless country,” Bucher said.