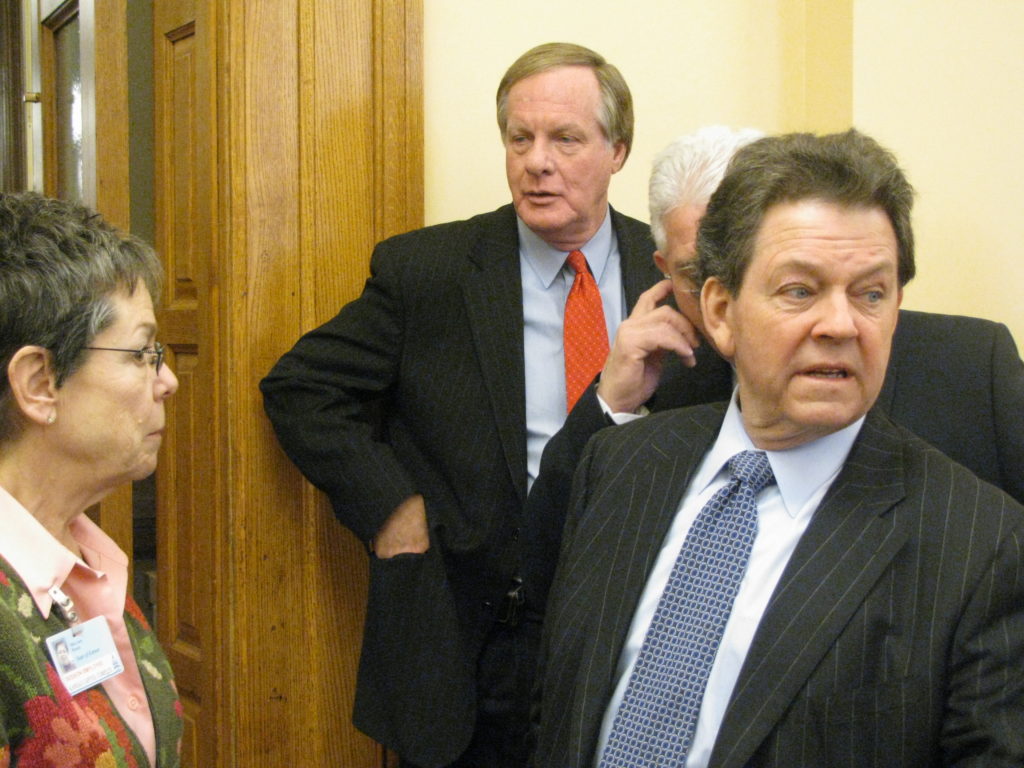 Consultant Arthur Laffer enters legislative committee room on Thursday to tout Gov. Sam Brownback's tax plan. Behind Laffer is Kansas Department of Revenue Secretary Nick Jordan. Laffer is being paid 5,000 by the Brownback administration to help with the tax proposal.

Laffer, who is being paid $75,000 by the Brownback administration for consulting work on the governor’s tax plan, was questioned during his presentation about Brownback’s proposal to end the state portion of the Earned Income Tax Credit, which helps low-income working Kansans.

Kari Ann Rinker, state coordinator for the National Organization for Women, said removing the EITC would hurt many single parents.

But Laffer said the funds saved from removing the EITC would be plowed back into programs to help low-income people.

Laffer said he understood the plight of single parents because he said he was one when his first wife left him with four children.

Rinker shot back, “You just got paid $75,000 for one consulting job. I don’t think you understand.”

Later, Laffer, considered the father of supply-side economics, was asked how Brownback’s plan could be described as fair when it would cut state income taxes for Kansans making more than $25,000 but increase the taxes for those making under $25,000.

“I don’t think that’s the right way to look at that plan,” Laffer said. He said the primary beneficiaries of Brownback’s plan will be low-income Kansans because it will lure more businesses to the state and create jobs.

“It’s not a class warfare issue. It’s how you get to prosperity for everyone,” he said.

Brownback’s plan would reduce state income tax rates and eliminate income taxes for thousands of businesses. The plan would also eliminate numerous tax credits and deductions and keep in place the 6.3 percent state sales tax, which is scheduled to fall to 5.7 percent next year.

Under figures provided by the Kansas Department of Revenue, the group of Kansans with adjusted gross incomes of $25,000 or less currently receive a total tax refund of $1.7 million. Under Brownback’s plan, they would have to pay $86.5 million in taxes, which has been calculated as a 5,102 percent increase. All other income groups would see a tax cut with the largest percentage cut being 18.5 percent for people making $250,000 or more per year.

In speaking to legislators, Laffer, who runs a consulting company out of Nashville, Tenn., said the states making the most economic improvement are those without a state income tax, such as Texas, Florida and Nevada. Progressive income taxes have damaged many states, he argued.

But Sen. Tom Holland, the leading Democrat on the Senate Assessment and Taxation Committee, argued that Laffer’s premise was unfounded.

Texas, Florida and Nevada have other sources of revenue, such as oil and tourism, that Kansas doesn’t have, he said.

But Laffer said states such as Ohio and Michigan have suffered with state income taxes.

Willis Heck, a retired school superintendent from Newton, who is serving on a tax study group formed by Senate President Steve Morris, R-Hugoton, and attended Laffer’s briefing, said he was concerned about how Brownback’s plan will affect funding of “core functions of state government.”

He asked Laffer if Laffer had looked into that part of the plan, and Laffer said he hadn’t.

Laffer also responded to reports of a lawsuit filed in Texas that alleges he lent his name to a group that bilked investors out of $3.1 million in a Ponzi scheme.

Laffer said he was never served court papers in the lawsuit and that he has been sued many times. The Associated Press reported that the plaintiffs who filed the lawsuit have dropped it.