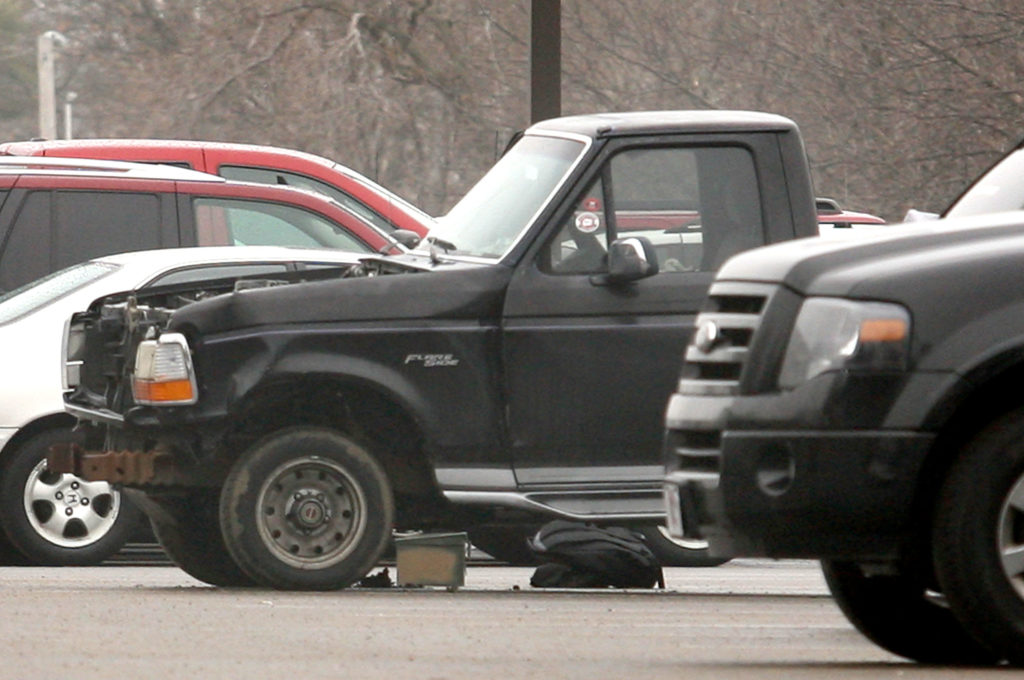 Police block the area where a suspicious vehicle is parked on the west side of the Kansas Judicial Center, across the street from the statehouse in Topeka, Kan. Police say a man is being questioned in Topeka after allegedly phoning in a threat against the Kansas governor's office. Capitol police spokesman Patrick Saleh says another man is being questioned Wednesday afternoon about a suspicious vehicle parked near the Statehouse. The Topeka Capital-Journal report the two events don't appear to be related. 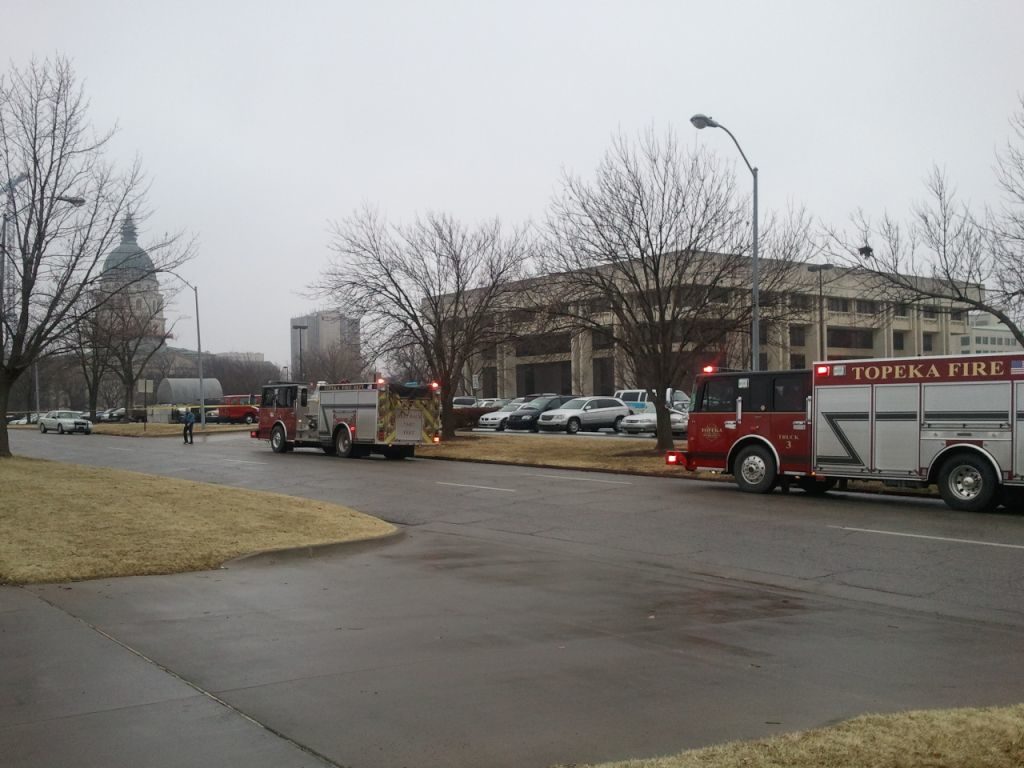 Emergency personnel respond to the scene of a bomb threat, Wednesday, Feb. 15, 2012 in Topeka, Kan. Police say a man is being questioned in Topeka after allegedly phoning in a threat against the Kansas governor's office. Capitol police spokesman Patrick Saleh says another man is being questioned Wednesday afternoon about a suspicious vehicle parked near the Statehouse. The Topeka Capital-Journal report the two events don't appear to be related.

Topeka ? Several homemade bombs were found Wednesday in a pickup truck parked near the Kansas Statehouse that had specialty license plates issued only to U.S. military paratroopers, and police said they arrested the owner inside an underground tunnel connecting the Capitol to an office building.

Capitol Police spokesman Patrick Saleh said the incident was not connected to another arrest Wednesday of a man who allegedly phoned in a threat to Gov. Sam Brownback’s office from a Topeka motel.

“Neither one of them was armed, and neither of them offered any resistance,” Saleh said.

Saleh said officers went to investigate the pickup after receiving a call from a state employee about it being parked in a restricted lot outside the Kansas Judicial Center, south of the Statehouse, without the normal state worker tag. An officer saw suspicious objects inside, including an empty gun holster, and authorities called in the Topeka Police Department’s bomb squad.

Saleh said the homemade explosives were made with household materials and designed to spray shrapnel once they were detonated. He didn’t have further details but called them “actual explosives.”

But, he added, “Everybody in the building was safe.”

Officers arrested the pickup’s owner inside the tunnel used by legislators, state officials, lobbyists and citizens to go between the Statehouse and a building that houses state agencies and legislators’ offices and where legislative committee meetings are held. Saleh said the man claimed to have an appointment in the office building, but none was verified. Saleh didn’t have information about the man’s identity.

The man was being questioned by agents from the federal Bureau of Alcohol, Tobacco Firearms and Explosives, Saleh said.

The discovery of the pickup truck led authorities to temporarily block traffic and access to the parking lot. The black Ford with no hood and a beat-up front grill, remained in the Judicial Center parking lot Wednesday afternoon, set off by a police car and orange cones.

The truck had a specialty Florida license plate issued only to qualified U.S. military paratroopers. It also had a special forces sticker on its bumper and stickers on its back window saying, “Welcome to America. Now speak English” and “Does my American flag offend you? Call 1 800 LEAVE THE USA.” The gate of the pickup bed also had a decal from a dealership in Ocala, Fla.

The Associated Press attempted to check the license plate number with the Florida Highway Patrol, but officials declined to provide information about the vehicle’s owner.

“We would not be able to release that because of an ongoing investigation they’ve got going on out there,” Lt. Jeff Frost said.

The pickup incident and the phoned-in threat to Brownback’s office came the same day a Kansas House committee opened three days of hearings on several bills designed to crack down on illegal immigration, backed by Secretary of State Kris Kobach, a former law professor who helped draft tough laws in Alabama and Arizona.

But Saleh said neither arrest was connected to a coinciding rally at the Statehouse that was protesting policies pursued by Brownback, Kobach and other Republican officials.

The other man was arrested at a Motel 6 in Topeka within minutes of making calls to Brownback’s office Wednesday morning and is being held in the local jail on suspicion of harassment by telephone, Saleh said. He is 37 and has no permanent address, but his last known home was Columbia, Mo.

Saleh said the man told officers he was planning to move to Salina, about 100 miles west of Topeka, but authorities couldn’t find an address for him there.

Saleh said the governor’s office pinpointed his location through caller ID. He described the man as “ranting” but said his comments were threatening enough for Brownback’s staff to call authorities.

The governor’s office referred calls about the incident to the Kansas Highway Patrol, which oversees the Capitol Police.