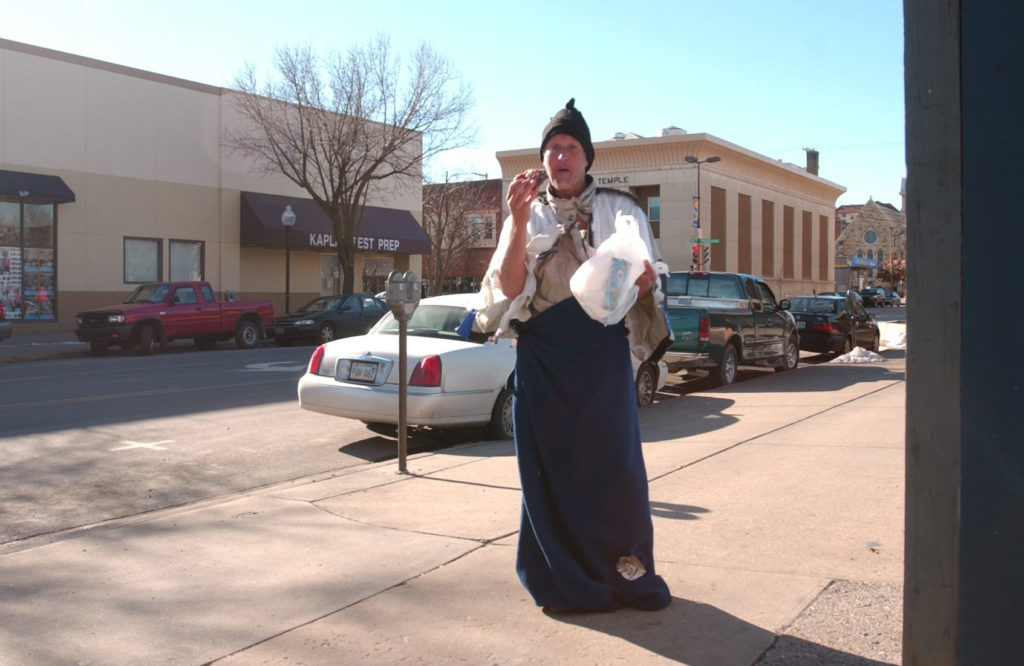 A Lawrence Municipal Court judge has declared part of a city ordinance that makes it illegal to obstruct traffic on a sidewalk vague and unconstitutional.

Judge Randy McGrath made the ruling Wednesday in a trial of Robert Gilmore, 54, who faced three misdemeanor counts of prohibited use of a right of way for incidents last year on Massachusetts Street.

Prosecutors accused Gilmore, who sometimes goes by “Simon” and is often seen downtown wearing a robe or bed sheet, of blocking the sidewalk under the ordinance. Elizabeth Hafoka, a city prosecutor who handled the Jan. 27 trial, said the alleged incidents occurred June 14, Sept. 30 and Oct. 26.

The city commission on a 3-2 vote in 2005 approved the ordinance making it illegal to walk, stand, lie or sit on a sidewalk to block the lawful passage by another person or require the person to take evasive action to avoid physical contact. The ordinance was drafted in 2005 along with an “aggressive panhandling” ordinance.

Attorneys said McGrath found one subsection of the ordinance that makes it illegal to “continue to obstruct traffic” and the definition about people having to walk around someone was vague and violated the First Amendment. The leaving of objects in a right of way and intentionally obstructing traffic were said to be OK.

Gilmore’s defense attorney, Shelley Hickman Clark, said the ruling was important because the U.S. Supreme Court has ruled the First Amendment gave people a right to be on a public street or “walking at whim.”

She said McGrath gave examples that it can be difficult to walk through an area if people are standing on the sidewalk downtown waiting to get a table for a crowded restaurant.

“It’s difficult to walk through that crowd, but it’s not criminal activity,” said Hickman Clark, an associate clinical specialist with Douglas County Legal Aid. “I think it’s very important for people who want to be downtown just to be part of the community.”

Gilmore was released from custody Wednesday after McGrath made his ruling. According to past Journal-World stories, Gilmore’s mother said he received a diagnosis of paranoid schizophrenia in childhood.

Social services agencies have been unsuccessful in attempting to help him.

Hafoka said the city has until Feb. 22 to decide whether to appeal the decision to Douglas County District Court.

McGrath, who retired as municipal court judge last year, heard the case because Judge Scott Miller recused himself. Miller was a city staff attorney starting in 2005 who crafted much of the city’s newer criminal ordinances and codes.