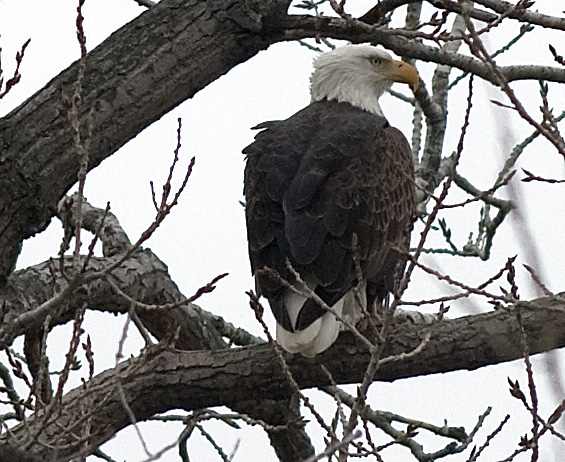 A bald eagle sits on a nest at Bismarck Lake as bird-watchers took part in the annual Christmas bird count in Douglas County on Saturday.

For those thinking about hanging up a bird feeder over the winter, Stan Roth offers this advice:

Put some water out with the bird feed — the birds will need it in these dry months.

Good winter bird feeds include those that contain energy-rich oil, including black-oil sunflower seed and safflower. For finches, thistle feed is the best. These are all widely available at hardware stores and pet shops.

If you want woodpeckers, put out some peanut butter or suet, a kind of fat. Imitation suet, made from a mix of lard and seed, will work just as well.

To keep squirrels from making a buffet of these offerings, Roth suggests hanging the bird feeder from a fine steel wire. It’s strong, but too thin for most squirrels to navigate. Alternatively, a feeder can be set atop a pole with a shield under it.

Conditions were perfect for the annual Christmas bird count Saturday in Douglas County, except the area seemed to be a little short on birds.

“The number and the diversity seem to be down from past years,” said John Standing, a biologist surveying Bismarck Lake, north of Lawrence, along with three other bird-watchers. Even so, they counted several flocks of Canada geese, visited a bald eagle guarding a nest of eggs, and spotted many of the usual suspects: red-tailed hawks, ducks and gulls.

The Bismarck Lake group was one of 12 patrolling the area Saturday morning, taking a census of birds and bird species in different sectors around Lawrence. Their efforts will be combined with other bird counts across the state in the coming weeks, part of a nationwide effort organized each year by the National Audubon Society from Dec. 14 to Jan. 5. Stan Roth, the event coordinator in Lawrence, will lead another bird count Dec. 22 in Baldwin City.

The bird count is partly about collecting data, Roth said, but more importantly it’s a reason to get outside and enjoy nature. He started leading groups on bird counts 52 years ago as a high school teacher looking for a way to get his students outside during the winter. For some, it rubbed off: One of his students from the class of 1959 was on the bird count Saturday with him.

Across all 12 sectors, the bird lovers generally expect to count about 90 species in a day. By 11 a.m. Saturday, Roth’s group had counted 41 species, which was below average and skewed heavily toward ducks.

“Ninety-nine percent of them are mallards,” said Bill Busby, a Kansas University zoologist with the bird count. But even those were not out in great numbers, and the bird-watchers had not seen the sparrows or snow geese they expected.

Busby said that was partly because of the drought, which meant less plant growth, less seed production and less bird food. There was also the mild weather, which didn’t drive northern birds into Kansas as fast as a typically cold winter.

For the bird-watchers, it was “perfect duck weather,” but Standing summed up the group’s conclusions when they gave up on Bismarck Lake to bird-watch elsewhere.