Angelique McNaughton, Special to the Journal-World 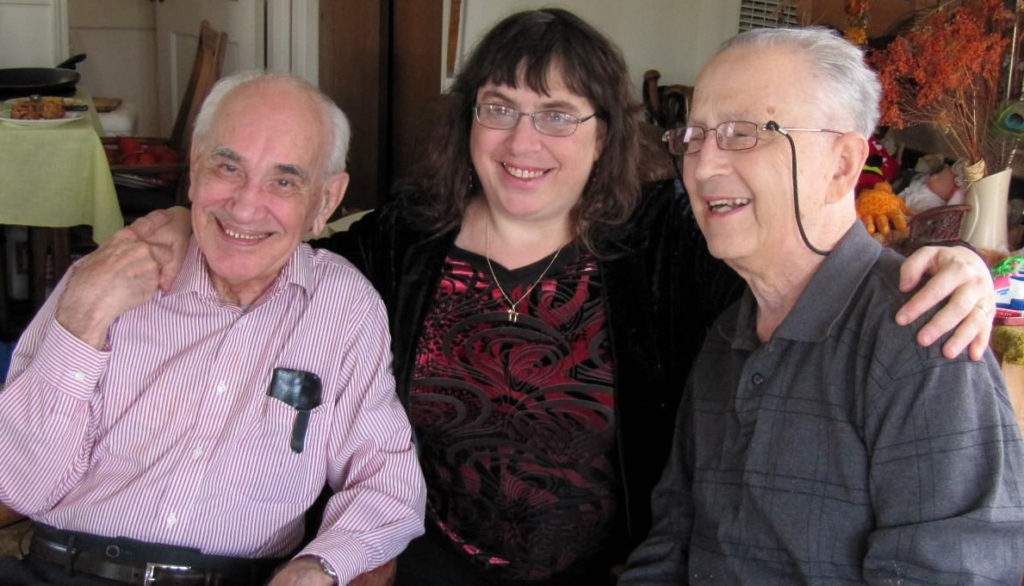 Lawrence author and poet laureate of Kansas, Caryn Mirriam-Goldberg, center, has written a book about former Polish resistance fighter Jarek Piekalkiewicz, left, and Holocaust survivor Lou Frydman. Mirriam-Goldberg, Piekalkiewicz and Lou Frydman’s wife, Jane Frydman, will have a reading and a launch party for the book “Needle In the Bone” at 7 p.m. today at the Lawrence Jewish Community Center, 917 Highland Drive. Lou Frydman died in January. 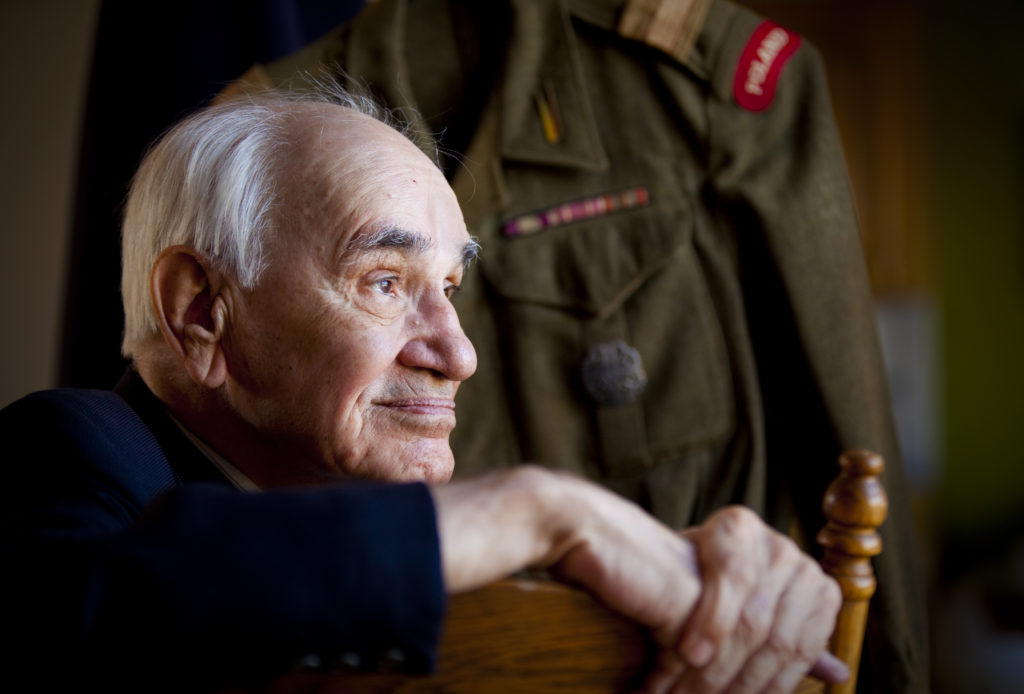 World War II veteran, Jarek Piekalkiewicz fought with the Polish resistance during the Warsaw Uprising of 1944 and was held as a prisoner of war in Germany until liberated by U.S. forces on April 1, 1945. Piekalkiewicz, who is pictured on Wednesday, Dec. 12, 2012, is a subject of a new book, Needle in the Bone, by Lawrence author, Caryn Miriam Goldberg. The book explores stories of survival and a friendship between Piekalkiewicz and Holocaust survivor Lou Frydman. Nick Krug/Journal-World Photo 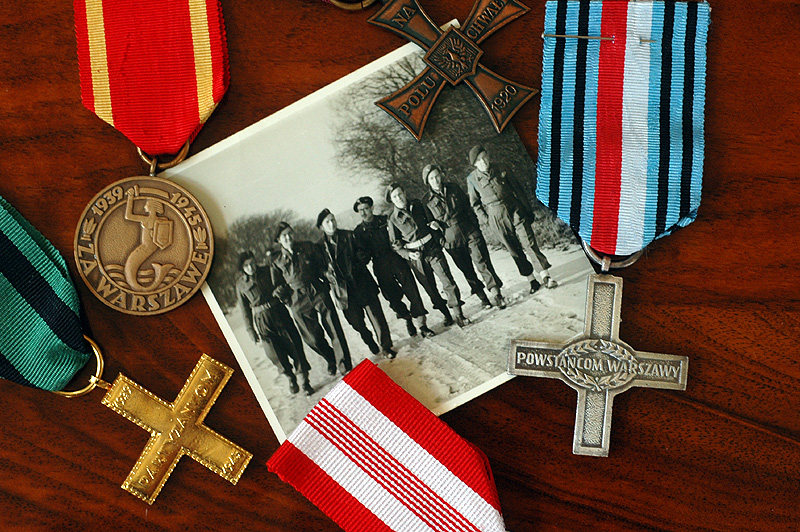 As a young man, Jaroslaw Jarek Piekalkiewicz, center in above photo, was involved in the Polish resistance of the Germans during World War II and earned several medals. He organized a resistance unit with his cousin to gather weapons and train fighters when he was only 15 years old and became the group's commander in chief.

When his captors caught him and three other prisoners stealing potatoes from the German army during World War II, Jaroslaw “Jarek” Piekalkiewicz was set to be executed.

He was lined up against a wall, catatonically anticipating the shot that would end his life, when a high-ranking officer drove up on the scene and narrowly prevented the execution.

“That was the closest I was to death,” 86-year-old Piekalkiewicz said with tears in his eyes, visibly shaken by memories of the incident.

The retired Kansas University political science professor said it’s hard to articulate his memories from the 10 years he spent in the Polish resistance army.

But similar experiences, and those of his close friend Lou Frydman, are detailed in a new 320-page book by Kansas poet laureate Caryn Mirriam-Goldberg. Frydman was a Polish Holocaust survivor of some of the most notorious concentration camps.

The book chronicles the lives of both men before, during and after the war through their stories, historical research and the author’s own questions and perceptions.

Late last month, Potomac Books Inc. released “Needle in the Bone: How a Holocaust survivor and Polish Resistance Fighter Beat the Odds and Found Each Other.” A book launch will take place at 7 p.m. Saturday at the Lawrence Jewish Community Congregation.

“I knew Jarek and Lou for many years as part of the community and I knew bits and pieces of their story,” Mirriam-Goldberg said. “I felt like it was a wonderful story.”

About five years ago, Mirriam-Goldberg approached her friends, Piekalkiewicz and Frydman, about authoring a book that would feature parallel accounts of the men’s lives.

“It came out of my mouth, ‘Do you want me to write a book about your life,’ and they said yes,” Mirriam-Goldberg said.

Piekalkiewicz and Frydman, a retired KU associate professor of social welfare, met in Lawrence at KU in 1975 and became quick friends.

“I think that is what brought us together in many ways — that he was very Polish,” Piekalkiewicz said through a thick accent. “We would compare notes about growing up.”

Four years younger than Piekalkiewicz, Frydman was born in 1930 and grew up in Central Poland. He faced the realities of being Jewish during World War II at an early age, entering his first concentration camp when he was barely a teenager. He and his brother, Abram, were the lone members of their family to leave Nazi-occupied Poland alive.

“Lou had a great deal that he brings to anything,” Mirriam-Goldberg said of interviewing Frydman. “The darker the moments got, the more he made me laugh, and it was really kind of a gentle way to be led through such horrific material.”

Throughout the course of the war, Frydman survived six concentration camps, including Auschwitz and Budzyn, and three death marches. He died on Jan. 24, 2011, from prostate cancer.

Frydman mainly attributed his survival to “dumb luck,” his wife, Jane Frydman, said, and to the help he received from others.

“If you have experiences like me and Lou, you ask yourself, ‘Why was I saved?'” Piekalkiewicz said. “I think he thought he was saved to be of service to other people and that’s how he got in social welfare and fought for the rights of children. … He was a child himself when he went through that.”

Piekalkiewicz was a little older, 16, when he decided to start his own underground resistance army. Two of his family members were main leaders in the Polish resistance before they were discovered and executed.

At the age of 18, he commanded 1,000 soldiers during the Warsaw uprising in 1944 and saw heavy fighting.

“I (figured) I could stay quiet and do nothing but that didn’t really mean they (Nazis) wouldn’t catch you or that your chance of being killed would be less,” he said matter-of-factly. “The other choice was to fight against the Germans.”

He spent the decades following the war concentrating on his career, eventually settling in academia.

Frydman said she doesn’t think her husband’s story needed to be told any more than other survivors’ stories.

“He’s not any more or less important than anyone else who was involved in the Holocaust, but it certainly is an extraordinary story, even where the title of the book came from,” she said.

The title came from an experience Frydman had while at Budzyn. When a camp whistle blew in the middle of the night, Frydman had to jump down from his third-tier bunk onto a mattress below his, and he landed on something sharp — a needle — that penetrated his bone. Unable to remove it at the time for fear of being shot, the needle remained in his foot, eventually healing itself into the skin.

“He died with that needle in his bone,” said Frydman, who will be speaking at Saturday night’s book launch on behalf of her late husband. “It’s a dramatic title, and it’s a true story.”