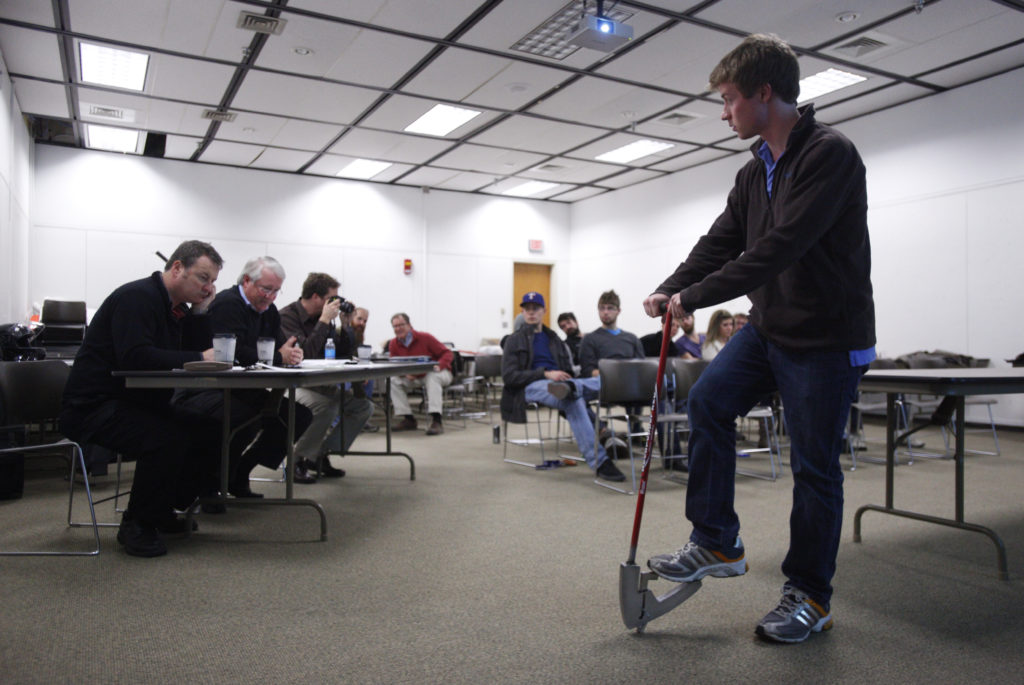 Kansas University junior John Hall, of Salina, demonstrates his winning redesign of the Garden Weasel WeedPopper Pro to a panel of judges on Wednesday in the Art and Design Building at KU. The redesign was part of a contest put on by R2FACT, a Kansas City product development firm, in which industrial design students tried to come up with the best product for removing weeds.

At midday in KU’s Art and Design Building on Wednesday, students brandished devices equipped with spikes, claws and blades.

They weren’t going to battle, though one student joked that his tool could serve well if one ever got involved in “a land war in Asia.” The 11 students were showing off the results of a three-month project: to design a better tool for pulling weeds.

Their task was to design an update for a 25-year-old product called the Garden Weasel WeedPopper. Each one displayed research, plans and a prototype model to a judging panel that included Web Thompson, a vice president for the Kansas City, Mo.,-based Faultless Starch/Bon Ami Company, which owns the Garden Weasel brand; and Steve Pope, a KU alumnus who owns R2FACT, a product-development firm that designs Garden Weasel products.

The 11 students are studying industrial design in KU’s School of Architecture, Design and Planning. Huw Thomas, a visiting professor from the United Kingdom who worked with them on the project, said they had volunteered for a chance to work on a real-world product.

“It’s great for them to work with a real client and understand the issues with trying to bring a product to market,” Thomas said.

They were also competing for an $800 prize for the student whose design was deemed the best. Junior John Hall was the winner.

Hall’s device included a foot pedal that caused tines extending from the bottom to clasp together, grabbing a weed by the root, as well as a fulcrum on which the user can rock it back to pull the weed up out of the ground.

He said the project presented a different challenge from the more theoretical products he’d worked on in his industrial design studio. He had to come with a product that not only performed a certain function — pulling weeds — but also was aesthetically appealing, fit within the Garden Weasel brand and could be mass-produced at an affordable cost.

Plus, he got to produce an actual prototype when he was done. It required a good deal of welding work, he said.

“It’s pretty surreal to hold in your hand,” Hall said.

Pope said he got the idea to approach KU about the project after he found out that Lowe’s hardware stores had declined to stock the WeedPopper alongside other Garden Weasel products, saying the older design wouldn’t be able to cut it in the tough Texas lawn care market. It seemed like an ideal opportunity for students to get a look at a real-world challenge they might face someday as product designers.

“It puts them under real pressure,” Pope said.

Junior Jerry Gabrie said that’s exactly why he signed on to compete in the contest in place of his usual studio work this semester.

“I really wanted, like, a real problem,” Gabrie said.

The students’ designs ranged from a scissors-like contraption that squeezed weed-grabbing claws together to a device with a descending blade, operated by foot, that resembled a guillotine for weeds’ roots.

Many of them said they’d stayed up the entire night before putting finishing touches before this finals-week event.

Junior George Parton told judges he felt a bit “defensive” about his simpler design, which resembled a pitchfork with a rounded fulcrum in the back for the user to simply rock back and yank up weeds.

Thompson, the Garden Weasel executive, said he hoped to continue the relationship with KU’s Department of Design.

“What I’m excited about is just to start planting these business seeds in these kids’ minds,” Thompson said.