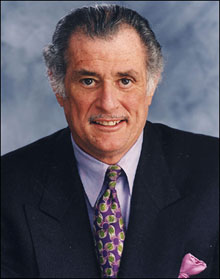 Deford has written for Sports Illustrated, for which he is now senior contributing writer, since 1962. He has written 18 books, fiction and nonfiction, the latest of which is a memoir released earlier this year, “Over Time: My Life as a Sportswriter.” He also provides commentary on NPR’s “Morning Edition” each Wednesday and serves as senior correspondent on HBO’s “Real Sports with Bryant Gumbel.”

He will receive the annual citation and speak at 10:30 a.m. Feb. 8 in Woodruff Auditorium at the Kansas Union. The event will be free and open to the public.

The honor is awarded each year by the trustees of the William Allen White Foundation, established in honor of the famous publisher of the Emporia Gazette to support journalism at KU and elsewhere.

Ann Brill, dean of the KU School of Journalism and a trustee of the foundation, said Deford fit what trustees look for in a National Citation winner: nationally known work, a long history of journalistic service and exemplification of White’s ideals.

“He was clearly a favorite of the trustees, and not just for, I think, his sports commentaries,” Brill said, “but I think for some of his other writings and his presence nationally.”

She noted Deford is also known for his philanthropic work related to cystic fibrosis. Another of his books, “Alex: The Life of a Child,” was about a daughter who died of the disease.

Among Deford’s other honors are an election to the National Association of Sportscasters and Sportswriters Hall of Fame and, earlier this year, the Red Smith Award from the Associated Press Sports Editors — the first such award given to a magazine writer. He has also won Emmy and Peabody awards for his broadcast work.

“I think he should be pretty well-known to the Lawrence audience,” Brill said.

On Feb. 7, the day before the citation is presented, Deford will spend the day at the Journalism School, talking with students, Brill said.