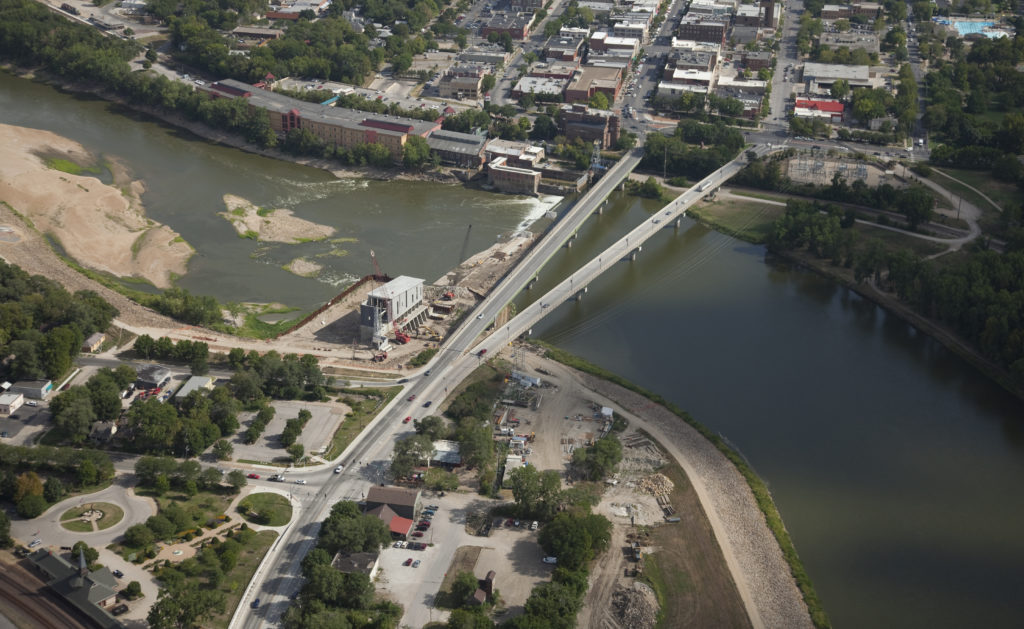 An aerial view looking south shows the continued construction of the Bowersock Mills & Power Co.’s hydroelectric power plant on the north side of the Kansas River on July 24. During the next three to four weeks, crews will install a “rubber dam,” a large rubber inner tube-like device, across the top of the current dam.

Consider it one big summertime inflatable.

Construction crews recently began installing a large rubber inner tube-like device atop the Bowersock Dam on the Kansas River. The work is part of the $25 million project by the Bowersock Mills & Power Co. to build a new hydroelectric power plant on the north bank of the river in downtown Lawrence.

For the next three to four weeks, crews will be installing what has been called a “rubber dam” across the top of the current dam, which is more than a century old.

The rubber dam can be inflated with the flip of a switch from Bowersock’s new plant. The inflated dam will increase the height of the dam, allowing more water to pool upstream. Most importantly, Bowersock leaders said, the device means their employees no longer will have to walk out on the dam to manually raise and lower plywood flashboards.

“This is a huge advance for us,” said Sarah Hill-Nelson, an owner of the Bowersock Mills and Power Co. “It is going to be so much safer.”

The rubber dam also should make it much easier to ensure the city of Lawrence, which has a water treatment plant just upstream of the dam, will continue to have a deep mill pond from which to draw water.

The city last year agreed to pay for $425,000 of the $1.3 million rubber dam project because of its benefits to the city’s water treatment plant.

Hill-Nelson said the power plant project has benefited from the dry weather and could start producing electricity in October.

“It is getting pretty exciting,” Hill-Nelson said.