The ‘Umbrella Incident,’ and the yard art that inspired KT Walsh to activism 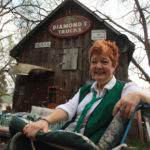 Most Lawrencians know KT Walsh from her residence at 732 (coo coo ca-choo) Rhode Island, for her yard is … well, there are many words to describe it: unconventional, whimsical, hodgepodge, creative.

But these words should not be limited to Walsh’s home — they can also be used to describe the artist herself, for she is all of those. She is also a visionary, an activist and a true Lawrence original.

Longtime residents will remember KT from the “umbrella incident” in 1995.

“I came home and there was a letter from the city telling me that I had to clean up my yard,” says Walsh. “I had 30 days to take care of it or they were going to come do it for me — and send me the bill.”

The city claimed the umbrellas she had in her trees were a potential hazard because they could fall and hit car windshields.

“I couldn’t believe it. I had been creating art in my yard for nine years and there had never been a problem,” she says.

It was a watershed moment for Walsh, who up to that point had never been political. With support from friends and family, she decided to fight.

“I started a petition, and I called the newspaper,” she says.

The story was out, and word began to spread across the country.

“People thought it was funny,” she says. “You know, a crazy woman in Kansas, but then a beautiful, community thing happened. Umbrellas started to appear all over town as people hung them in their trees in solidarity.”

While the issue with the city eventually died down, it never left Walsh, who, for the first time, realized that you can fight City Hall.

“It was my introduction to politics,” she says. “I learned that one person can make things happen.”

Since then she has been making things happen not only in her east Lawrence neighborhood, but in the Lawrence art community.

“People started asking me to go into classrooms and talk about what art is,” she says. “And when you stop to think about it, that is a huge concept. At some point it has to be addressed.”

In addition to advocating for the arts, Walsh has become active in her east Lawrence neighborhood, working to preserve the area’s unique character. She serves as a board member of the East Lawrence Neighborhood Association, and most recently, lobbied against the proposed multistory hotel/apartment complex at the corner of Ninth and New Hampshire streets.

“It is just too large,” she says. “The current design does not fit in with the size and scale of the surrounding buildings.”

Her activism has also helped to bring more arts venues to the area, such as the Lawrence Percolator, a space for cultural and artistic events. She is also excited about a play she is currently writing that will be performed at The Art Farm, a new theater space opening at Eighth and Connecticut streets.

“KT is one of those individuals who is very unique to Lawrence for her art and her grassroots perspective,” says Robert Baker, who knows Walsh from her work at the neighborhood association. “I remember when she won the Phoenix Award, and she brought in bags of items with bits of wood and scraps of cloth and other found items in them. She challenged people and encouraged them to create art with the stuff from the things she brought.”

The generous spirit she brought to the Phoenix Award ceremony is typical for Walsh. Once someone came by and asked if he could borrow an instrument that she had placed in her yard. “He said he needed it for about an hour,” she says, smiling and laughing. “I don’t know who would need a tuba for about an hour, but I gave it to him.”

Knowing Walsh, you understand why she gave the tuba so freely. The art, after all, isn’t about her, but rather for everyone else. “I do this to make people happy. To make people smile inside.”

Just try not smiling when you’re in Walsh’s presence, or when you walk by her home. And when you walk by that yard, you will see a plaque that says that hers is “A home for the not so easily discouraged.”

Choice words for her residence, and for the artist herself.