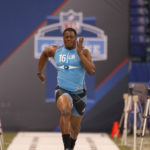 For the second year in a row, a former Kansas University defensive standout has signed a free agent contract with the Denver Broncos.

Saturday, just minutes after the 2012 NFL Draft had wrapped, former KU linebacker Steven Johnson, who led the Jayhawks in tackles during each of the past two seasons, announced via Twitter that he had agreed to a deal with the Broncos.

Like Harris, Johnson went undrafted but found a good fit in the Broncos, who are reshaping their defense under second-year head coach John Fox.

Johnson said the Broncos came into the picture late in the draft. Denver actually tried to trade for a pick in the seventh round so it could draft Johnson, but could not secure a pick. That inspired the Broncos to tell Johnson they wanted to sign him as a free agent and, after mulling over offers from Denver, Tennessee and about half a dozen others, Johnson saw Denver as the best situation.

“I’m happy,” Johnson said. “I’m a little overwhelmed, and it hasn’t really set in yet.”

As is the nature of the business, nothing is guaranteed to Johnson at this point, but Harris, who initially confirmed the news to the Journal-World Saturday evening, said he believed his former and now current teammate had a great chance of making the team.

“He’s going to have to earn his way through special teams first and make plays there,” Harris said. “Then he will be able to show what he can do on defense.”

Johnson said Harris’ path to success in Denver played a part in his decision.

Biere was believed to be the second most likely former Jayhawk in KU’s most recent senior class to have a shot at cracking an NFL roster.

Other former Jayhawks hoping to catch on with an NFL club in the next few days include offensive linemen Jeremiah Hatch and Jeff Spikes and cornerback Isiah Barfield, among others.