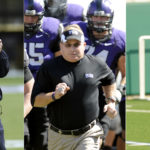 With spring football winding down and the conference’s head football coaches preparing to hand their players off to their strength staffs for the summer, Kansas University’s Charlie Weis joined TCU’s Gary Patterson and West Virginia’s Dana Holgorsen in discussing what the first few weeks of entering into new territory had been like.

Of the three, only KU is accustomed to the Big 12.

The same cannot be said for TCU and West Virginia, which are moving over from the Mountain West and Big East to take the spots vacated by the departure of Missouri and Texas A&M.

“It’s always hard,” Patterson said Monday. “I’ve been in six conferences in the 15 years I’ve been here. I’ve always said it takes you two years. You gotta play everybody once, and then you gotta play everybody back to kind of give you a road map of what you need to do. We have played some (Big 12) schools, but not recently, so we gotta get ready to go.”

While that concept may be the one that rises to the surface and steals a few headlines, both Patterson and Holgorsen said they have not prepared much for their new league this spring.

“We’re a little bit more worried about ourselves,” Holgorsen said. “There’s a lot of things that we’re gonna have to do before we line up and play a Big 12 schedule, there’s no question.”

That said, both coaches owned up to the fact that they had at least thought a little about what being in the Big 12 would mean for their programs.

“There’s a lot of subtle things that are happening, with who the coaches are, how we practice, what the schemes are,” Holgorsen said. “But the specifics on who our opponents are or what they do, we’ll get into that more when the season gets around. … There will be excitement about facing all of them. They’re all quality coaches, and we’re going to have our work cut out for each and every one of them.”

Added Patterson, who has had tremendous success of late while operating under the moniker of Giant Killer: “For us, recruiting-wise, we were already recruiting against these teams for those kinds of players a year ago. The saying out there, ‘Well, they weren’t in the Big 12,’ is one of the things we dealt with, and now, it’s, ‘Can they win in the Big 12?’ I think once we can prove that we can win in the Big 12, then I think you’re going to see a big change in how we do things.”

Weis was not asked about the league as much as he was about his second chance to be a college head coach. Asked if he had learned something from his five seasons at Notre Dame, Weis flashed his trademark honesty.

“You kidding me?” he responded. “I can’t tell you how many things. … When you go through being a head coach the first time, you never want it to not work out, but (when it doesn’t) you have time to sit back and reflect and say, ‘Why did I do that?’ There’s so many things that you go through the first time that you say, ‘Well, if I have an opportunity, next time I’ll do it this way.’ I talked to (New England Patriots coach Bill) Belichick at great length about this earlier in our careers, and he told me the same thing — the second time around you learn so many things from the first time around about the right and wrong way of doing things. That doesn’t mean you don’t still make mistakes, but you learn by your mistakes, and you just make less of them.”

It may seem odd to some that KU’s first conference game of the 2012 season — Sept. 15 vs. TCU — actually comes before the final game of the Jayhawks’ nonconference schedule. Monday, Weis explained why.

Weis continued: “Playing TCU wasn’t gonna be good any time you ended up playing them, but the whole goal would be to start gaining some momentum early in the season. That goes back to trying to change that whole mentality thing. You’re gonna play some good teams in the Big 12. And you’re gonna play ’em on a regular basis. So rather than wait until the fifth week of the year to go ahead and play one, you might as well get your feet wet and (say), ‘Let’s get going.'”

While TCU’s campus sits in the middle of one of the most fertile recruiting grounds for the Big 12, Weis said he also knew a little about the school in lesser-known Morgantown, W.Va.

“My first visit to West Virginia was many, many moons ago when I started working out some guys at the facility,” Weis recalled. “I really appreciate how rabid the fans are, and it’s a really tough place to play. The stadium is an awesome venue, and they have great fans, and it’ll be very difficult because they’re a very talented, well coached team.”

“He’s on campus for about five minutes, and he’s already viewed by his peers as the leader of the team,” Weis said. “That is saying volumes about the situation, both pro and con. On the negative end, it means you’re lacking leadership. On the positive end, it means you have somebody who brings leadership to the table.”

Fambrough to be honored

Former KU player and coach Don Fambrough, who died last September, will be celebrated Saturday, prior to KU’s annual spring game, when stretches of two streets near Memorial Stadium will be renamed in his honor.

The ceremony, which will feature KU officials, Lawrence City Commissioner Hugh Carter and Fambrough’s son, Preston, will take place at 11:15 a.m. at what is now the intersection of 11th and Maine Streets.

“Don Fambrough was an icon — not just on the KU campus, but across the state of Kansas,” KU athletic director Sheahon Zenger said. “He wore his passion for KU on his sleeve, and every day he proudly demonstrated his love for Kansas Football and Kansas Athletics. He loved his players, and they played their hearts out for him.”

Added Carter: “The City Commission and numerous community members were supportive of the decision to rename this section of 11th Street after Don Fambrough. Don was a long-time proponent of the university and the community. He was dedicated to his work with Kansas Athletics, but was also a passionate volunteer and fundraiser.”