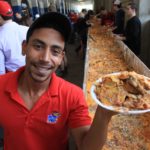 Eddie Diaz, of Centerplate, holds one of the hundreds of plates of nachos that came from an 80-foot-long tray Saturday at Memorial Stadium. The 4,689-pound nacho plate landed Lawrence a spot in the Guinness Book of World Records.

The term “loaded nachos” is an understatement.

A heaping 4,689-pound plate of chips, meat, cheese, beans and peppers earned Lawrence a slot in the Guinness Book of World Records on Saturday. The title for the world’s largest nacho plate did not come without a struggle.

For starters, a half-dozen volunteers worked on the project, galvanizing help, collecting resources and prepping food for two weeks. Then early Saturday morning, a crew of 80-plus volunteers began assembling the nachos at Memorial Stadium. At one point, a cooler went out, causing a big portion of the food to spoil.

“It was hectic. … We lost a couple thousand pounds of food. We had to overcome that and get food locally,” said Rick Brown, general manager of Kansas Athletics’ food vendor, Centerplate. “We run all of the food and beverage for the facilities, so we have extra food. Really it was just about pulling the resources together.”

Volunteers aimed to create a tasty nacho, not just a big one. Meat was marinated, onions were chopped, and jalapeno juice was blended with black beans. There were also fresh pico de gallo and cilantro.

The 80-foot nacho plate was finished by noon and served to Kansas Relays ticket-holders with a $1 donation or a canned food item, which will benefit LINK. Even after 1 p.m., when the dish had lost its warmth, people were filing through the stadium, clutching paper plates piled high with nachos. Jan Williams sat on a bench about 1:30 p.m., nibbling at a freshly scooped plate.

“It’s kind of cold, but it’s wonderful,” Williams said. “I think (what they did) is great.”

At least 70 percent of the nachos were consumed. And Brown is confident the record is safe in Lawrence. The last record, which landed at 3,999 pounds, was set in October of 2011 by Ninety Nine Restaurant, in Massachusetts.

“We beat it by a big jump, so it should stay here for a while,” Brown said.